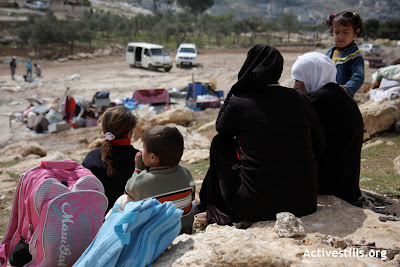 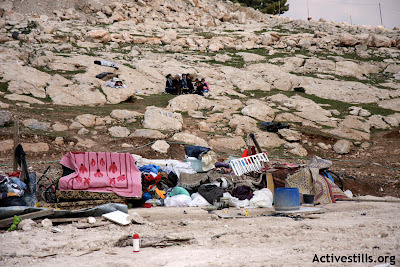 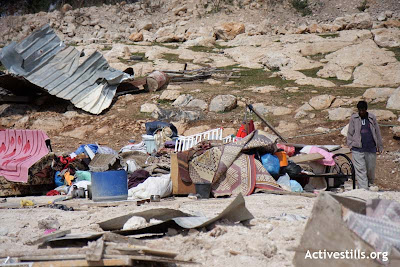 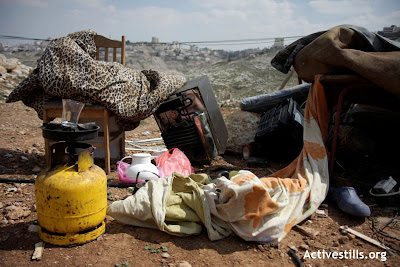 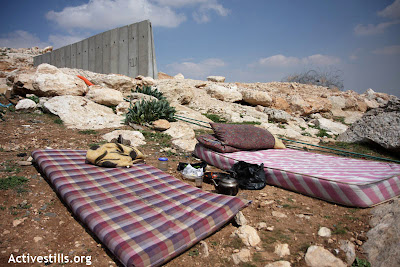 
A Bedouin family waits near the remains of their demolished home after the demolition of three structures of the Jahalin Bedouins consisting of two homes for two families and a shed for animals, in al-Eziryiah, 18.03.2009. The demolition left 17 people homeless. In the last two days, other demolitions occurred around and in Jerusalem, leaving around 40 people homeless. The Bedouins around Male Adumim settlement are particularly targeted, 2000 are being under threat of being displaced.

“I built the house three years ago after getting all the needed permits from the local council in Al-Eizareyeh,” said Ghazi Al-Qimary, referring to his home, which was located in the Al-Mashtal neighborhood. The building housed 13 people.

The head of the municipal council, Issam Far’on confirmed that Al-Qimary had obtained all the permits he needed, since the house was built within the Palestinian Authority’s jurisdiction.

Far’on said that the Israeli military was “lying” when it said the house was built without permits.

Al-Qimary was assaulted and then detained by Israeli soldiers who forcibly removed the family from the house. He was held until the demolition was finished.

Far’on, the municipal official, said that hundreds of houses are facing demolition in the area, expressing anger at what he said was “humiliation” inflicted by the Israeli army on the Palestinians in Al-Ezariya.

Israeli bulldozers also displaced 29 Bedouins from their encampment on Al-Baba Street in Al-Eizareyeh.

One of the shelter belonged to Muhammad Salman Salameh Al-Basha, with 10 family members, another to Sa’ed Hasan Hawamdeh with 10 members, and a third to Salman Al-Jahalin with 9 members.

Also on Wednesday Hatem Abdel Qader, a senior Palestinian Authority (PA) advisor on Jerusalem affairs, organized an official visit by senior South African diplomats to some of the 88 families in Jerusalem’s Bustan neighborhood who are also facing demolition orders.

Abdel Qader said the demolition orders are an attempt to “empty Jerusalem of its original inhabitents.”