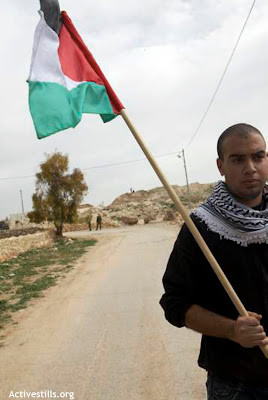 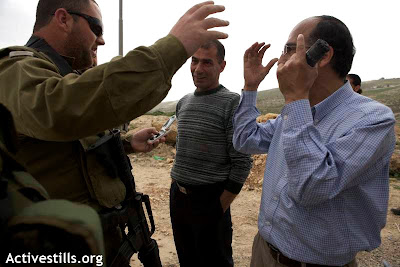 Inhabitants of Beit Sahour, Palestinians from the area and internationals gather to protest against the confiscation of land from Beit Sahour in Oush Grab, 21.02.2010. The Israeli soldiers fired tear gas and sound bombs at the crowd. The Popular committee of Oush Grab calls for another demonstration next Sunday. Photo by: Anne Paq/Activestills.org

Residents from Beit Sahour along with international supporters gathered at the evacuated military base of Ush Grhab east of the city. People held banners demanding the halt of the Israeli renewed work at the site and called for the end of settlement activity around their city.

The former military base at Ush Ghrab was abandoned by the Israeli army in April 2006, and part of the site was transformed into a public park and centre for the residents of Beit Sahour by the city’s municipality.

The municipality of Beit Sahour has been prevented by the army from converting the rest of the area into a children’s hospital serving all southern West Bank. Two years ago settlers announced that they are planning to erect a settlement at Ush Ghrab and called it Shdema.

Last week the army came back to the old military sitte and started to bulldoze land and install military instillations.

Today's action was organized by the Popular Committee to Defend Ush Ghrab, people stood near the military site and started to hold a Sunday Mass when Israeli border police troops attacked them with tear gas and sound bombs. Among the people were children and elderly.

No one was injured; residents walked back and promised to come back every Sunday, after soldiers announced the area as a closed military zone. Around seven military jeeps loaded with troops were involved in stopping the Mass on Sunday, according to witnesses.