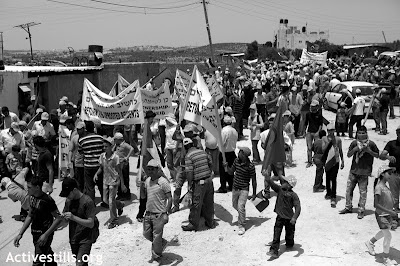 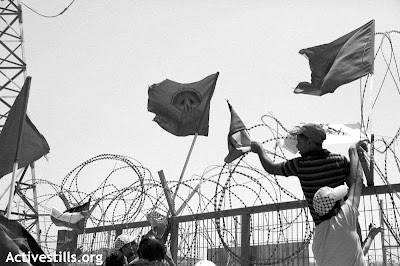 this was the call for the demo from AATW:

Against Segregation
On the June 4th demonstration we will focus on one case which embodies the entire history of the occupation:
The villages Yalu, Amuas and Bet-Nuba in the Latrun enclave were completely destroyed by the Israeli army during the occupation in June 1967. On some of their lands settlements such as Mavo Horon were built; other lands became the Canada Park, where Israeli citizens spend their leisure time.
For many years the uprooted residents of the three villages used to convene on these lands on the 4th of June. Yet, even this symbolic act was taken away from them with the erection of the Separation Wall. The land which used to be their home is now forbidden for visitation. However, the uprooted residents don't comply with their expulsion and insist on their right to return.
The majority of the families live today in the villages around the road 443. During the 80's, thousands of dunams were expropriated from the residents of these villages under the pretense that the road will serve them as a major route to Ramllah. However, the road is closed to Palestinian vehicles for years. The Supreme Court has ordered to open a section of the road, in a way that will not enable easy access to Ramallah through trhe checkpoints of Bitunia or Kalandia. The opened road will hence lead to nowhere.
In our joint rally on June 4th we will raise our voice against the policy of expropriation and segregation and call together for life in dignity, equality and freedom.

Email ThisBlogThis!Share to TwitterShare to FacebookShare to Pinterest
Labels: "road 443", demonstration, demonstration against the wall