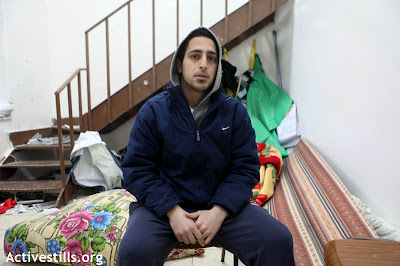 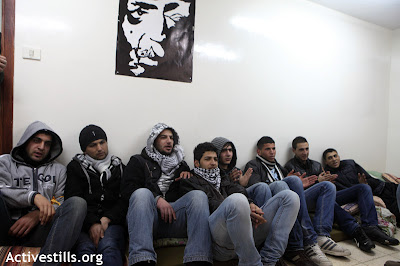 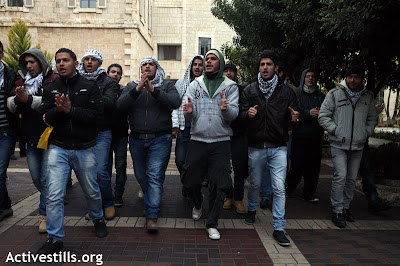 This is a post by Linah Alsaafin ( about the student of Birzeit university, she is making good points:

It's a sign of the times we're living in when hashtags are perfectly acceptable as titles, and I'm sure there are countless thesis dissertations in progress attributing this as another significant regime-tackling phenomenons of social media. Suffice to say, it is increasingly obvious where people get much of their news from nowadays.

Last week on Tuesday the 17th, a number of students from Birzeit University protested the totalitarian fixtures regarding tuition costs and financial measures introduced at the start of the second semester, which left 1200 students unable to continue their education because of the expensive costs. Dozens walked inside the administrative building, and were subsequently locked in by security. Thus, #OccupyBZU was commenced.
One of my main problems with my time at Birzeit University was the lack of any concrete student activism, overtaken instead by the simulated scenes and atmosphere of a US high school as shown in Hollywood movies. That's all fine and dandy since not everyone wants to be at the forefront of tackling social change or even challenging Captain Israel to an arm-wrestling match, but when the circumstances are crying out for it, there is no excuse left to remain passive. The glory days of BZU were during the first intifada, the late 80's to the early 90's, where students were largely involved in peaceful resistance against the Israeli military occupation. One such demonstration was attending classes in empty buildings in defiance of Israeli military orders. Students were one of the important driving forces behind the mass protests and civil disobedience in Palestinian society. That of course didn't come without its sacrifices; another name for Birzeit University is the Martyrs' University/ جامعةالشهداء due to its thirteen students killed by Israel.

The Oslo Accords can be explained as the reason for the students' growing detachment from politics, despite the student parties within the university itself being derivatives of Palestinian political parties. The second intifada ushered in armed resistance as the primary method of response against Israel's increasingly unbearable occupation, which contrary to the first intifada, isolated sectors of the Palestinian society from being a true popular uprising. Coordination with the other eight universities in the West Bank and Gaza Strip became more difficult. Factionalism reared its ugly face following the US backed civil fighting between Hamas and Fateh back in 2006. Politics on campus became repressive, and used as a platform to trash talk the rival party. Some male students belonging to Hamas' Kutla Islamiyeh bloc were imprisoned by the Palestinian Authority. Instead of the students of the Fateh university Shabeeba group demanding their release, the act was further augmented by incendiary accusations and wholehearted support. These antics only managed to alienate a large number of students who find no representative as they are not affiliated to any political student party, and "student activism" took the role of proudly parroting each respective party's propaganda.

The above serves as an explanation for the disillusionment concerning the possibility for any meaningful act to take place on campus. These protests against financial matters are hardly news. In fact, it is the norm at the beginning of every single semester. They always take the same cycle: Students protest, each student political party writes up a statement, get out their best throaty orator backed with factional music, and proceed to threaten the university's administration with calls of prolonged strikes. The whole thing lasts for a week, with actions escalating then diminishing as fast as if they never happened, without any success achieved. The same Spartan students go from building to building, classroom to classroom, informing the other students that classes have been suspended for the day, right under the nose of the professor. They order the students to leave the classrooms, leave the building, and join them in a demonstration in front of the administration building. Hardly anyone listens, and see this as an opportunity to hang out with friends. The buildings then get put on lock down for an indefinite time period, even if there are students and professors inside. Tires are burned at the gates of the university, the gates themselves get locked with chains brought from who knows where, and the student portal Ritaj becomes useless as it doesn't give out updates for whether there will be classes on this day or not.

The point is that these drastic actions serve as a cry for attention, as their repetitive nature hardly achieve whatever demands the student parties champion out through the state of the art loudspeakers. But Tuesday, January the 17th excited a lot of people, myself included because it was the first time students staged a sit-in overnight. The following morning, more details began to emerge and were shared on Twitter.
It turned out that students, contrary to initial thoughts, did not purposely mean to stay overnight in the administrative building. 76 students merely went inside to protest peacefully, and found themselves locked in by security after the administrative staff vacated the building. Allegedly, one security guard taunted the students by saying, "Let's see who's man enough to stay here for the night." The radiators were turned off, and the students spent the night without blankets or food, shivering as a storm raged outside. For those who had to use the bathroom, they were allowed outside but were prevented from going back in. As a result, 22 students were left inside the administrative building. The following morning, one student's health deteriorated rapidly but the administrative prohibited him from receiving immediate medical attention. The university dean Dr Khalil Hindi issued a media blackout on the whole situation.
The most austere financial measure imposed was that a student's tuition had to be paid in full before the new semester begins, in order for the student to choose his/her own classes. This is outrageous to say the least. Tuition costs are usually paid in money installments twice a semester, in an attempt to alleviate some families' financial stresses. Non-elected Prime Minister Salam Fayyad may have succeeded in transforming the West Bank, and Ramallah specifically into a capitalist consumerism society, but Birzeit University doesn't host only the privileged rich kids. I remember one time taking a group of high school seniors from Jenin on a quick tour on campus, and one of the chaperoning teachers told me he couldn't afford to send his kids to Birzeit Uni because the tuition was more than his monthly salary. The university is suffering from financial losses because the Palestinian Authority owes it money from three years.
10 students from Bethlehem University went on hunger strike also protesting the changed tuition policies, before #OccupyBZU even started. Speaking of "Occupy" (a word I don't like for apparent reasons) the hashtag was changed to #ProtestBZU because the administration accused the students of occupying the building--ignoring the fact that they were locked in-- thus painting the whole sit-in unfavorably as it is in their interests to do so.
The protest seemingly had the support of the majority of the students, those affiliated with parties and those who were not. For once it wasn't an act pulled by Hamas, or Fateh, or the Left (Jabha). Some even went so far as to label it the Birzeit Spring:

More pictures found here
The protest continued for the next couple of days. The gates of the university were still closed, the students still inside the building. The university's workers' union tried to mediate between the demands of the students and the administration but found that the administration ignored the demands and flat out refused to even talk, let alone negotiate with a group of students who were not the official representative. When the student council finally announced their support for the locked in students, the administration still refused to talk. Even after a committee composed of representatives of all eight student parties as well as from the student council was agreed upon, the administration still refused to talk. Their arrogance is a staple in their job description. The bureaucratic system of Birzeit University is one of the worst I've ever had the misfortune to encounter. Other students brought tents and pitched them outside the gate, where they too staged a sit-in. The media blackout was still in place, with everyone getting updates and information from students on site tweeting away. Reports had it that Dr Hindi cut off the internet on campus, an act that Mubarak would have applauded...or in hindsight, maybe not.
Then on Saturday, a press conference was called at 10am. At 12pm was another press conference for the administration. The blackout was lifted. The vice president of the university denounced the protesting students as having an agenda. For their part, the students finally made the financial and academic demands public. This threw the whole protest into a different light, as some of the demands were pretty stupid, to put it bluntly. Speaking to other students, they told me that the behavior of the protesting students was far from angelic in directing their speeches towards the dean, as if he were a despicable despot. Regardless, if you're going to protest peacefully, willing to endure days of cold and mistreatment, then whatever you're protesting for should be worthwhile, practical, and most importantly, in the interests of the students themselves. Many found issue with the academic demands (seems like the sillier points, such as raising the number of times a student was allowed to fail a class before getting suspended permanently from three to five were omitted, see below) while the financial ones were more sensible.
Financial Demands (translated from here)
Academic Demands
An agreement was reached on Sunday. The administration finally got off its high horse long enough to agree to all of the financial demands, but wouldn't agree to any of the academic ones pointing out it was beyond their reach to make changes regarding this aspect. Normal classes are set to resume on Tuesday, the 24th.
Meanwhile, five students have been hospitalized as a result of the hunger strike they started last Monday. More students have vowed to join in the hunger strike, raising the total to thirty students, seven who have been on strike since last week.
From Ma'an News Agency:

The administration suspended classes last Tuesday, saying it could not ensure students' safety on campus because of the protests, which have included all-night sit-ins.

The student senate, which is leading the protest, said it had tried to end the crisis by offering the university 40,000 Jordanian dinars ($56,400) from the Fatah movement to exempt students from tuition fee increases. It said the university had not responded to the initiative.

Instead of treating symptoms, the source of the sickness must be treated first. Birzeit students may have succeeded in achieving their financial demands, but what about the cause for the rise in tuition costs? It's not all down to the university's miserliness. The Palestinian Authority is in debt, plain and simple. It has done absolutely nothing to build and sustain a homegrown economy, relying instead on overwhelming foreign donor money. Austerity measures have recently been introduced, with citizens required to pay a minimum of a 5% tax increase and a maximum of 30%. The PA takes the billions of dollars it is granted by governments, and hardly invests them in community building projects or in Palestinian society in general, unless you count the mushrooming number of bars and expensive restaurants that cater to the elite. Dissolving the PA would pop the bubble of normalcy under occupation, and there'd be a good chance of Palestinians of finally realizing that their houses, cars, laptops-all on loans- and lifestyles they cannot afford are worth nothing while they are still under Israeli occupation.

So I call on all students in the West Bank to rise up, first against the parasitical PA, then against the occupation once and for all.