An Israeli activist shows the way by refusing to be released without her Palestinians brothers in the struggle, 21.12.2011 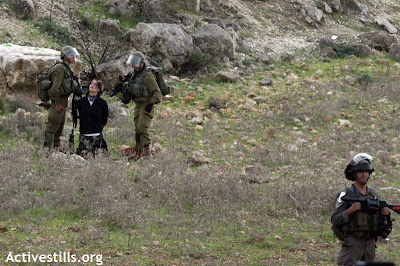 Lesson from Israeli who chose jail, solidarity over segregation

For the first time in many years, an Israeli activist chose to put into practice the notion promoted by Henry David Thoreau: “Under a government which imprisons any unjustly, the true place for a just man is also a prison…”

Truth be told: We all should have acted like ‘A’. Every Friday, across the West Bank, Israelis and Palestinians demonstrate together. They stand together opposite the same soldiers, chant the same slogans, give the same speeches, run away from the same clouds of tear gas and the same spray from the disgusting “skunk” machines, and get arrested for the same reasons and with the same false accusations.

However, it is at that point that the legal mechanisms of racism start kicking in. The Israelis are released from the police station with limited conditions or with similar conditions from court. An Israeli detainee has to be brought in front of a judge within 24 hours. The Palestinians are taken to Ofer Military Prison. From the outset, the military orders that dictate their lives allow the authorities to detain them for eight whole days before they are even required to allow judicial review of the detention. Even then, in most cases, the court will decide to allow an extension and then another extension and then detention till the procedure regarding an indictment has ended. This process can take a number of months and in the end, the arrested Palestinian is released. The arrested Israeli, however, his friend and partner, was free that whole time.

That is how it always is under apartheid law. As a rule, we activists always made sure that if Palestinians were arrested, Israelis are arrested too so as to show solidarity, to protect our friends inside detention and to document the way they are treated. But then we sign the required injunction – and go back home.

Until A. came along. A. was arrested last Friday together with 20 Israelis, Palestinians and internationals at the main demonstration in Nabi Saleh marking a week since the murder of Mustafa Tamimi. Among those arrested was a close family member of the Tamimis, Mohammed Tamimi, as well as Mohammed Khatib from the Popular Committee of Bil’in – one of the most moral, creative, funny, determined, brave and moving people I have ever met in my life. When the time came to sign the conditional release form at the police station (a 15 day-injunction to stay away from Nabi Saleh) A. and another friend refused. They were brought before the judge, refused again, and were sent back to detention. They notified the authorities that they were standing in solidarity with their friends Tamimi and Khatib and they would not agree to be released while the two others were still in detention.

In the end, Khatib was released and so was A.’s friend, who finally signed the conditional release form. But Tamimi and A. stayed in detention – Friday, Saturday, Sunday and Monday. Yesterday morning (Monday) A. was supposed to be brought in front of a Magistrate’s Court in Jerusalem, which was expected to extend her detention once again. However, the police had apparently grown tired of A., and decided to release her without conditions – thus almost literally throwing her out of her detention cell.

A. succeeding in communicating an exceptional message of solidarity. She demonstrated, with her action, with her imprisoned body in a disgusting cell at the Russian Compound in Jerusalem, the absurdity of the apartheid laws of the occupation, the way they differentiate between partners in the struggle by their origins, by the nationality dictated to them, by the ID card they carry in their pockets.

The distance between home to jail

The truth is that this is what we all should have been doing. Just like we are arrested together, so should we stay in prison together. We should refuse, all of us, to sign the release forms, all the Israeli activists arrested in the same protest together with all the Palestinian activists. Our community “elders” say that once, it really was like that, in the first Intifada and before. Everyone refused, everyone was jailed together (at the time, they explained, authorities would not separate between the arrestees at the detention center, unlike today).

Bus alas, we do not refuse. We sign. We give up on demonstrations for two weeks in one place and go to others, and then come back again to the place from where we were originally banned. At the end of the day we always go home: to comfortable warmth, to a soft bed, to sleepy cats, to familiar food, to favourite books and to the embraces of lovers. We go back to routines, to work, to tasks, to meetings, to nights out, to Facebook, to the blogs, the newspapers, the greengrocer, the neighbour whose bike is blocking ours, to family dinners, to a light that needs fixing in the hall, to our studies and to the streets that turn into a river when it rains for more than five minutes.

Our friends do not. They stay dressed in IPS (Israeli Prison Service) issued uniform, in a cold tent in Ofer Military Prison, with nothing from home. Remember how Abudallah Abu Rahmah described the months in jail with no shoes and no watch? Well, it’s something like that.

Abu Rahmah, like Tamimi and Khatib, are the men jailed under a government that unjustly imprisons just about anyone. They are the men Thoreau was referring to. And this is the place for the just man to be imprisoned too. A. was doing the most just thing that can be done under the regime we have here.

There is no end to the reasons for signing a release form, for the reasons to return home. It can be said practically that it will not help since, of course, the Palestinians are not released any sooner due to this refusal. It can be said that it just snatches away more good activists who are very much needed on the outside. It can be said that a worthy struggle requires not only fairness but also the well-being of the strugglers, and there is a need to do as much as possible so as to survive and not burn out. It can be said that it is a more sustainable way as opposed to a situation where we will all be in jail. And it’s true. It’s all true. However, despite everything, there is something very right, more right, in A.’s actions. Something that marks clearer than ever before the ugliness of the system. And like a beacon of light illuminates the alternative to this method. Therefore, today, also those of us sitting at home – we are all A.

Haggai Matar is an Israeli journalist and political activist, focusing mainly on the struggle against the occupation. He is currently working at Zman Tel Aviv, the local supplement of Maariv newspaper, and at the independent Hebrew website MySay.