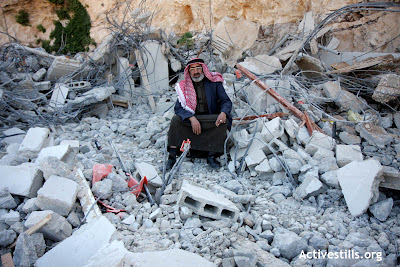 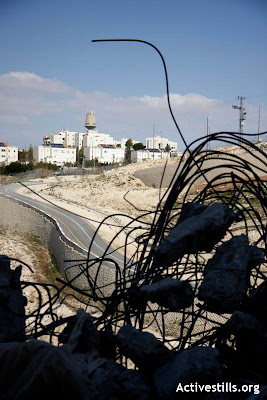 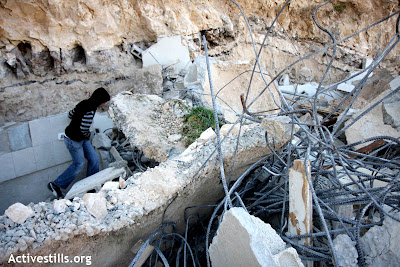 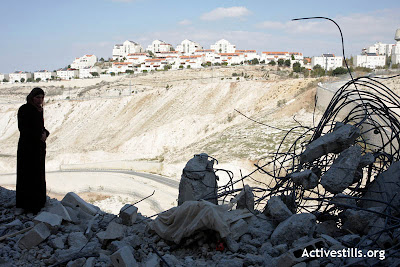 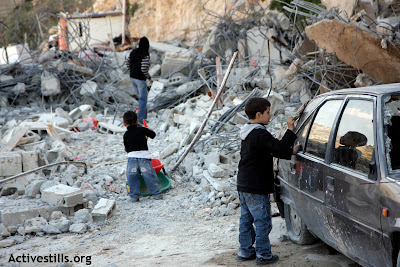 
The remains of a demolished home belonging to the family of Raby'a Al-Kamary are seen outside, in al-Eziryiah, 18.03.2009. The demolition left 10 people homeless. In the last two days, other demolitions occurred around and in Jerusalem, leaving around 40 people homeless. According to the owner, the house was built legally in area B, which is under the jurisdiction of the Palestinian authority,, but the Israeli police who came to demolish the house claimed that it was in Area C, without providing any document to justify it.

One house, two bedouin huts and an animal shed owned by Palestinians near Jerusalem city were demolished on Wednesday by the Israeli authorities.

All the demolitions took place in al-Eziryiah, a Palestinian town just outside East Jerusalem.

The home, owned by Rabie' al-Qamari, was demolished on Wednesday midday. Rabie' told IMEMC that he had all the necessary papers for his home. "They came today with bulldozers and demolished my home. When my son asked them about the demolition order, they attacked him and beat him up. I have all the required papers for my home; the area is under Palestinian control so they have no right to demolish my home."

Witnesses said that municipality bulldozers from the nearby Israeli settlement of Ma'ali Adomem demolished the house. The municipality told al-Qamari that his home is in an Israeli controlled area. "I have maps showing that my house is located in the Palestinian controlled area; it is not even close to the settlement, so they have no right to do this," Rabie' al-Qamari said.

"Before building the house I went to the Israeli army civil administration and they told me the area is controlled by the Palestinian authority and not by them," al-Qamari added. Earlier on Wednesday morning, the Israeli Army demolished two bedouin huts and an animal shed that belong to Palestinians from al-Eziryiah.

The army told the owners that it was built in an area where the separation wall will be built. The owner, Kaled al-Jahaleen, told IMEMC that the army gave him no warning. "They came today without any warnings and demolished the structures. They did not allow us to move our stuff first." al-Jahaleen said.

In related news, Hateem Abed al-Qader, Jerusalem Affairs Adviser to the Palestinian Prime Minister, announced on Wednesday that Israelis have handed out 80 new demolition orders for homes owned by Palestinians in Jerusalem city. On Tuesday, bulldozers belonging to the Israeli municipality demolished a Palestinian owned home, located in the Beit Safafa neighborhood of the city.

The flat is part of a seven story-high building owned by Abu Khalaf, a Palestinian from Jerusalem. Israeli troops arrived at Beit Safafa on Tuesday morning and surround the building. Shortly after, troops forced everyone out and demolished the seventh floor. The Israeli municipality says the flat was built without the necessary permission.

Israel has intensified its campaign of demolishing Palestinian-owned homes in the city since the start of 2009. The Jerusalem municipality handed out demolition orders to 96 Palestinian families in the first week of March. In February, demolition orders were issued for 88 homes in the al-Bustan neighborhood, located immediately south of the Al-Aqsa Mosque in Jerusalem's old city. If these orders are carried out, thousands more Palestinians will become homeless.

Israel has occupied the city of Jerusalem since 1967 and the authorities have rarely given Palestinian residents permission to build homes. The Israeli government has continued to build Jewish settlements in and around Jerusalem and throughout the West Bank, an act which violates international law, Geneva Conventions and all peace agreements signed between Israel and the Palestinians since the 1993 Oslo Accords.