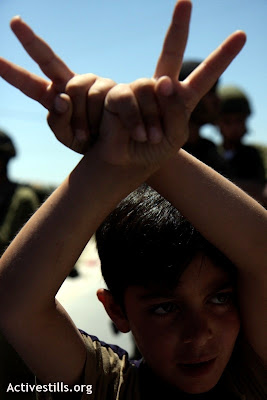 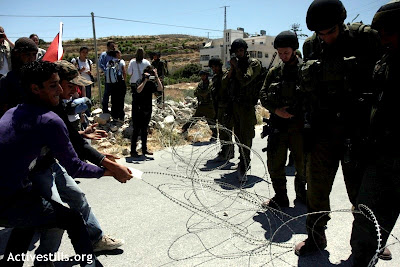 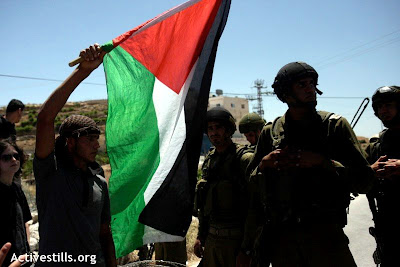 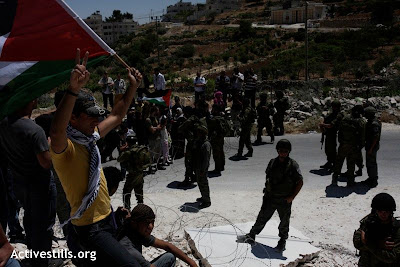 
Today, the weekly popular protest at al-Ma'sara, a village near Bethlehem, was again met by armed Israeli soldiers. The Israeli Occupying Forces had blocked the exit road of the village with razor wire, denying the people their right to access their fields.


Dozens of people marched to show their support for al-Ma'sara's struggle against the Wall. As every week, Palestinians were joined by Israelis and internationals.

The organizers of the protest, the al-Ma'sara Popular Committee Against the Wall and Settlements, held speeches commemorating the Naksa (En: Setback), which marked the beginning of the Israeli occupation of the West Bank and the Gaza Strip on June 6, 1967.

In Arabic, English, and Hebrew, protestors called for an immediate end to the ongoing occupation as entrenched in UN Resolutions 181 and 242. Umm Muhammad, whose son was released yesterday on 25.000 NIS of bail after one month of detention for having joined the May 1st demonstration, called on US President Obama to put more effort into ending the occupation, dismantling all settlements, and fulfilling all legitimate rights of the Palestinian people.

An Israeli activist addressed the soldiers directly in Hebrew and asked them to rethink their position and join civilian Israelis, Palestinians, and Internationals in their struggle for peace and justice.

One Palestinian managed to circumvent the razor wire and climbed on an earth-mount to wave the Palestinian flag in an area of the village that the Israeli soldiers tried to make unreachable to the demonstrators.

When the soldiers ordered him to step down, he was backed up by others and thus able to hold his position. At the end of the demonstration, the Popular Committee invited internationals to join in a series of summer activities, including camps, workshops, and agricultural work in the village.

The Popular Committee further called for support and solidarity with four of its members and one Palestinian from Hebron, whose trials are scheduled to start on June 9. All five were arrested during the May 1st demonstration; four have been released on bail while Hassan Brejeya remains in prison.

Report by: al-Ma'sara Popular Committee Against the Wall and Settlements