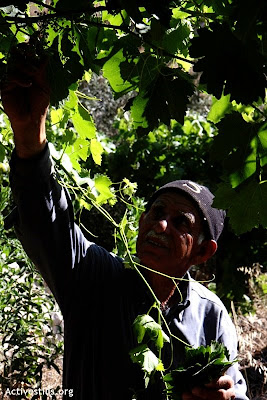 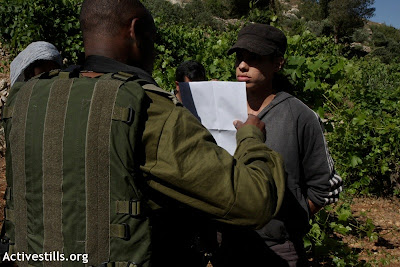 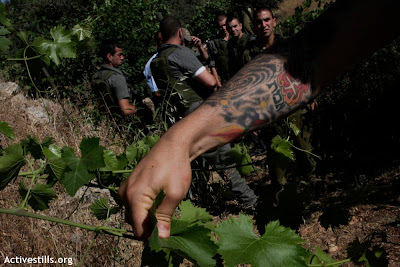 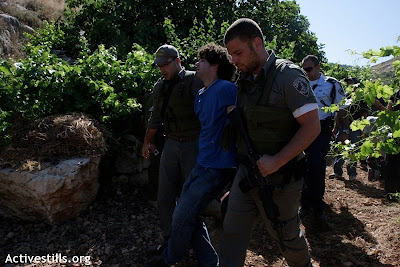 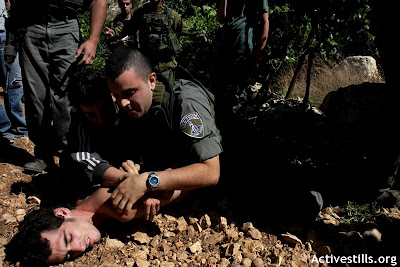 Please see below two different reports: the first one is from IMEMC based on what I told them as I was on the spot when the events occurred. The other one is from Ynet, the popular Israeli website. See the difference in the reports, I think it needs not so much comments but it shows how the situation is reported by mainstream Israeli Media. Ynet talks about clashes while there was no actual clashes. The settlers attacked a group of Palestinian women and children who were harvesting on their lands!!! Maan also talked about "clashes" although they changed a bit the report after I called them to complain but they still leave the word "clash" in the title and did not fully give a real account about the whole incident.

Israeli army and settlers violently obstruct Palestinians from harvesting their lands in Safa
author Saturday May 30, 2009 12:28author by Katherine Orwell - IMEMC News report Report this post to the editors

"Villagers from the Southern West Bank village of Safa, north of Hebron, have tried to harvest their lands that are located closely to the settlement of Beit Ayn, on Saturday morning. The Israeli army violently pushed the villagers of their lands, as settlers were gathering on near by hilltops. Later in the morning settlers came down and attacked a group of women and children, a local witness reported to IMEMC.


A group of internationals and Israelis went along with the villagers to help harvest the land. In the past few weeks there have continuously been problems with the army and settlers from the settlement of Beit Ayn, preventing the people of Safa to access and harvest their land.

During this time of year the people in Safa harvest the grape leaves, an important source of income for the village.

After the harvest started, the army arrived and ordered everyone to leave the lands, as they claimed the land, belonging to the Soleiby family, to be a closed military zone. The army gave the harvesters a ten minutes notice, then proceeded to push the group out by kicking and beating them. Two Israelis, that had joined the harvest, were arrested and taken away by the army.
The army told the people that the settlers were gathering and they were afraid that there might be problems. People in the group responded that the army had to take its responsibility and remove the ones creating the problems, not the ones suffering from it.

Instead soldiers turned up with batons, literally pushing the people off the land with their sticks.
During all that time settlers were watching on top of the hill, screaming racist slogans, such as: "Death to all the Arabs". After some time the settlers came down the hill into the fields that belong to the village and started throwing stones. A group of 16 settlers attacked three old women and one child that were harvesting the grape leaves. Other settlers took the camera of an Israeli.

A car of a member of Ta'ayush, a joint Arab-Jewish organization, was damaged when settlers flipped over the car. The car was eventually flipped back by a local farmer, with his tractor.
The army was standing idly by as settlers were moving around Safa. When the settlers got out of sight, the army came down and arrested another three Israelis plus two Palestinian children of the age of 14. The three Israelis were beaten up with batons. The soldiers repeated that everyone had to leave.

Today's events in Safa were not mere incidents, but are part of a series of violent attacks by settlers and the army, that has been going on in the village for years."

The report from Ynet:

Leftists and Palestinians clashed with settlers near the Bat Ayin settlement on Saturday. Police detained two Palestinians suspected of throwing stones and three Palestinians and two leftists for entering a closed military zone.
The leftists claimed that the settlers damaged one of their vehicles. (Efrat Weiss)