Action against uprooting of trees and building of the Wall in Beit Jala / Action contre la construction du Mur a Beit Jala, 03.03.2010 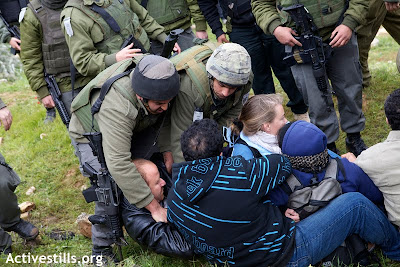 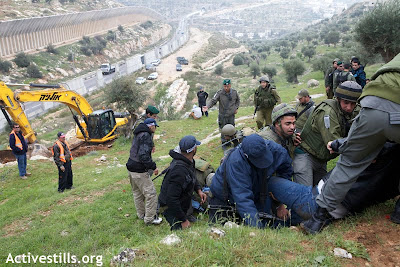 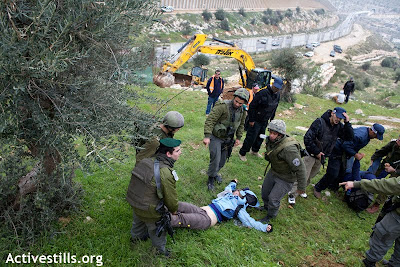 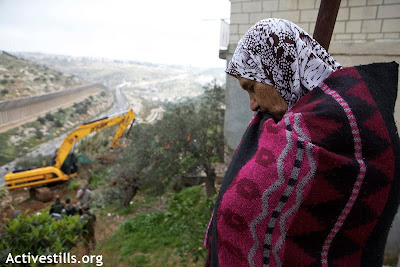 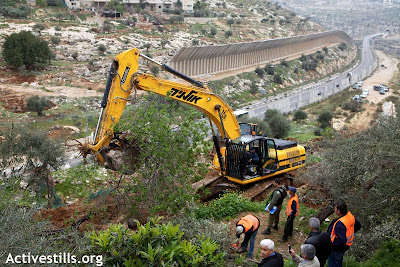 another report from the Anarchists against the wall:

Already when driving on route 60, we saw the intimidating bulldozers riding on the side of the road on their way to another day of "putting facts on the ground" as chiefs of the Israeli government call it. As we arrived in Beit Jalla, a heart-breaking scene came into view - a huge pile of sawed trees and olive and lemon branches spread all across the yard of the house next to the wall's path. A yard it cannot really be called anymore - the grass is turned over, two children's swings were uprooted and put aside, and the only thing left standing is a brick oven, with mounds of dirt and mud all around it. 10 olive trees were cut down here already yesterday. A red X on the front floor of the house marks the path of the wall to pass here, which will seize the whole yard area and cut the only access driveway to it. It's hard to imagine how life would look like in this place in a week or two.
We were 45 protesters - 25 Palestinians, 15 international activists and 4 Israelis. We descended to the works path trying to stop the bulldozers. A group of twenty soldiers prevented us from doing so, and began pushing us up the hill without showing a closed military area order as they are required. While the bulldozer's claws were uprooting trees one after the other, we explained to the officers that their actions violate numerous international laws, as well as the fact that they may not tell us to move without the order. We were pushed up the hill a few more meters to where we sat on the ground demanding to see a printed order before we move any further. At 08:53 they brought the papers and the officers declared the area will become a "closed military zone" within 7 minutes. One of them held two stun grenades with a nasty grin on his face. We reminded them again that constructing the wall on West Bank lands is a crime according to international law, as well as the settlers-only road which it "protects" and that they still may put down their guns and join us. A bearded IDF captain told us that the only law he follows is the biblical law. Rabbai Arik Ascherman referred him to to read the chapter in the book of Deuteronomy which refers to uprooting of fruit trees.
At 09:00 precisely they started pushing and dragging us up the hill again. 2 Israelis and one international activist were detained for a few minutes and were released shortly thereafter. Two Arab TV network reporters stationed on the upper road to report the events. Two young women from Beit Jalla were prominent among the protesters. As one of the officers told on of them them "Min fadlak, ruch min hon" (Please go away from here), she replied wisely "Min fadlak, ruch leIsrail" (Please, go back to Israel), with her finger pointing north-west.

When we left, the bulldozers were still working with all their might

Email ThisBlogThis!Share to TwitterShare to FacebookShare to Pinterest
Labels: demonstration against the wall, wall