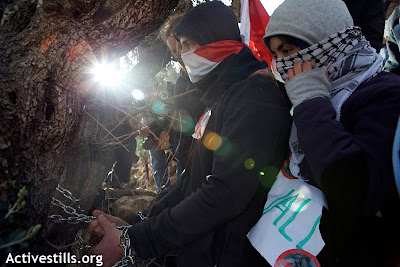 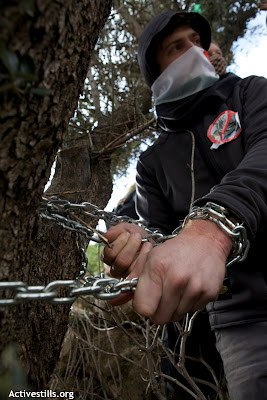 Residents of Beit Jala town, southern West Bank, along with Israeli and international supporters chained themselves to olive tree in protest of the Israeli built wall on their land.

At around 7:00 am on Thursday people gathered, at the town then marched towered the lands were Israeli planning to build a new section of the wall.

The new section of the wall will surround a nearby settler only road to protect it and destroy around 75 acres of land owned by residents. The wall will pass right by their front doors. Metrei Ighneem, from Beit Jala decriped they what it means for the army to cut down his olive trees:

“They uprooted 15 olive trees that I own. They also destroyed my land. Those trees date back to the Roman Era. Olive trees for me means life. It give me food and oil.” He added, “ which law allows the cutting of trees that is thousands of years old? This is a crime.”

“This house and the land near it is the fruit of my life's work. Back in 1990 they took land to make the settlers road and now they came and took the rest. I am totally broke.”

The Israeli army and police arrived at the location but today troops did nothing to stop the protesters as soldiers stood and watch while young men chained themselves to the trees army bulldozers had not yet cut.

Another group planted two trees that bulldozers destroyed earlier this week. On Tuesday and Wednesday troops attacked those who came to who support to the local residents, and forced them out using rifle butts and batons. Some hours later people came back from the wall site and, before leaving, they visited families nearby.

Lamyia al-Arrja, council member at the Beit Jala Municipality told IMEMC that the new wall section will have devastating effect on the residents:

"The Wall will cut through people's homes and lands, destroying trees. Residents will not have the ability to expand their homes anymore. The town of Beit Jala was affected a lot by the settlements and settler's roads, and now we are completely surrounded because of the settlement, their roads, and the wall."

The Municiplity of Biet Jala hired a lawyer this week, and today the lawyer managed to get the Israeli court to order a halt in construction until a final decision is made. Israel announced its plans for this section of the wall back in 2006.

Families and the municipality fought the decision in court. So far no ruling had been issued on the matter. In 2004 the International Court of Justice in The Hague announced that the Israeli wall built in the West Bank is illegal.