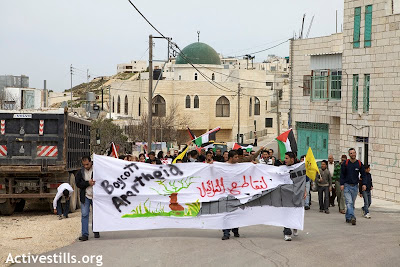 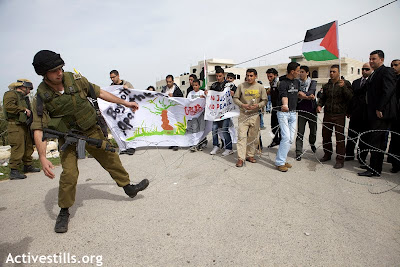 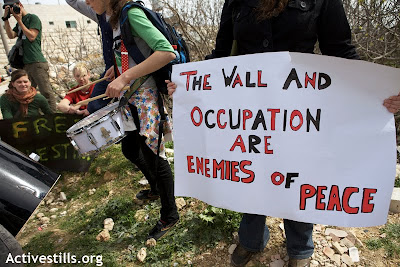 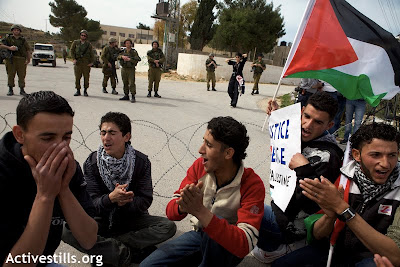 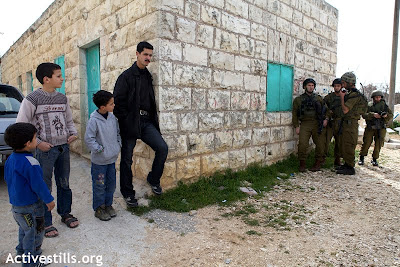 Some twenty Israeli and international activists joined fifty Palestinians in this week's Friday demonstration against the Wall in Ma'asara. Demonstrators marched through the village towards the route of the wall, and were stopped by an army reserves unit which blocked the road with barbed wire several hundred meters deeper into the village than usual. The group composed mostly out of officers presented a closed military zone order, barring the march to pass the wire. Several demonstrators crossed the line anyway, but decided not to try and push further in an attempt to avoid the violent army attacks which have become common in these non-violent demonstrations lately.
And so, standing by the barbed wire, demonstrators carried speeches in Arabic, Hebrew and English. Amongst the speakers was Fatah Central Committee member Abu-Zaki. The Samba band played its new drums, sent in solidarity from their Turkish counterparts, and slogans were chanted in defiance of the occupation and in favor of the un-armed and united Palestinian struggle.
The demonstration ended after about an hour, with no unusual events. Earlier in the week, however, a prominent member of the popular committee of the village was attacked upon reaching a military checkpoint. Mahmud Zwahre was beaten by soldiers, and told that demonstrations must cease.