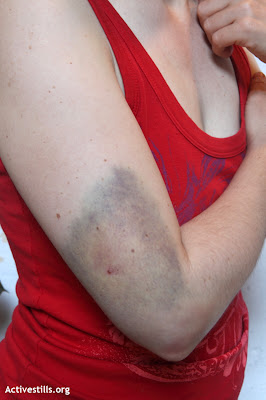 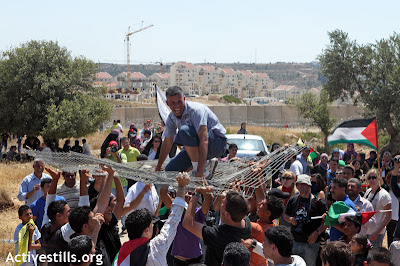 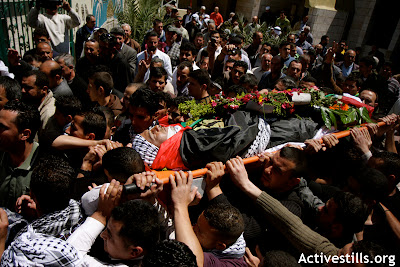 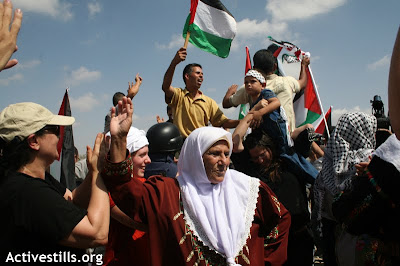 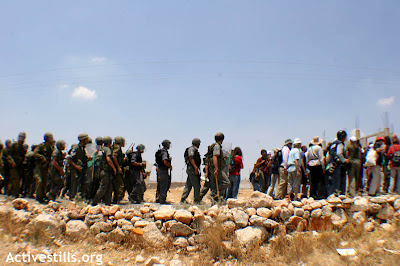 
Bil'in I love you

It took me a few days but I wanted to write something more personal about what happened last week in Bil'in. For me, Bil'in is not just any village but one that had a big impact on my stay here and on my work. It was here that I started to go to demonstrations and learned about the popular resistance. It was also in Bil’in my photo collective group activestills originated and began to develop. What happened last week is just the newest chapter of something that started more than 6 years ago when the village began to demonstrate against the building of the Wall on its lands.

I remember the weekly demonstration in Bil’in in 2007 on the first Friday after the decision of the Israeli Supreme Court which ordered the state to change the route of the Wall “within a reasonable period of time”. As the result of this decision, the villagers of Bil'in were supposed to regain some 275 out of the 600 acres that were annexed by the Wall and the nearby settlement of Modiin Illit.
I remembered the joy. People – hand in hand – Israelis, Palestinians and internationals, activists singing and dancing together. In front of the Wall (here, made up ofa system of electrified fences) that had not yet been taken down. But the Palestinians were not fooled by the court’s ruling and expressed their determination to continue the resistance until they gained back all of their lands. They would not back down untilthey saw it with their own eyes....and indeed it took four more years, hundreds of more demonstrations, two further court petitions, hundreds of injured and two dead, for the Israeli state to finally implement the ruling.

So when I heard that the Israeli army would finally take down the Wall,I knew I would not miss the party, which took in fact place in several acts.
On 24 June, word got out that the Israeli army had started to dismantle parts of the Wall in Bil'in.We also heard that they were nonetheless preventing the villagers and journalists from accessing the area and documenting what is considered a victory of the growing popular resistance. So a call was sent out inviting us to join the following Friday’s demonstration that would take down the Wall:

“The Bil'in Popular Committee has declared Friday the 24th to be the last day of the old path of the Barrier on village's lands, and the beginning of the struggle against the new path. A mass demonstration will march on the Barrier to dismantle it and access the lands sequestered behind it.”

I joined the protest but I was not too hopeful that the Israeli army would actually let us demolish the Wall. When we started the customary march through the village and to the main gate of the Wall, I was astonished to see that the Palestinians had brought a bulldozer along. Like so many times before, the people of Bil'in had managed once again to surprise me with their audacity. Everyone was anxious about how the Israeli army would react.

As the bulldozer drove straight to the Wall, the Israeli soldiers showered us with scores of tear gas canisters (later I found out that they also shot live ammunition at the bulldozer), some of them fired at the level of the heads and also with the “skunk” (a noxious chemicals-based liquid which carries an awful smell). It was so scary that I almost dropped to the groundfor cover went almost down to the ground looking for protection. Under attack, the bulldozer managed nervetheless to lift the main gate of the first barrier. But several tear gas canisters penetrated the glass walks of the bulldozer's cabin and the driver quickly had to back up until he got out of a dense cloud of tear gas.

More tear gas canisters were shot directly at the protestors. I was running away whenI was hit on my right arm. This was actually the first time I was hit during demonstrations, I had been lucky so far, unlikemost of the other photographers in our collective, who had been either shotor arrested at one point, not to mention the loss or damage of equipments. Every year, Israel is denounced by Reporters Without Borders for its bad records of attacking, harassing, and sometimes killingjournalists. The last photographer who was seriously injured is Mohammad Othman, a free-lance photographer from Gaza who suffered an injury to his chest and damage to his spinal cord in an Israeli attack against a non-violent demonstration held in the Gaza Strip for Nakba Day.

My injury was minor. I just ran to the ambulance to get some ice on it, the ambulance then drove quickly out of the “front line”, as some tear gas went inside the ambulance and was affected the driver who could hardly drive straight as his eyes were teary and he could not see. I got out of the ambulance went back to the action but the demonstration was almost over. The Wall was still standing.

How pathetic and absurd this scene of an army defending a Wall that it had started to dismantle a few days earlier was....I went back home with a big bruise and a question: when will we see the Wall fall, in Bil'in and everywhere else in Palestine?

A few days later, we received an email alert the Israeli army had already finished dismantling the section of the Wall in Bil'in. It was done very fast, again probably to prevent journalists from documenting it. A video by Haitham Khatib, the dedicated cameraman from Bil'in, was published showing Bil'in residents celebrating, driving and honking endlessly on the former “security road” that used to run between the different fences that made up the Wall. Another call was sent out, this time inviting us to come and join the residents on Friday in a celebration. I gladly answered the call, not knowing really what to expect: where we would go if the Wall was not as its usual place? Would the Israeli soldiers attack us nevertheless in the open fields or when we would reach other sections of the Wall? Are we going to try to reach other sections of Wall? I was curious. I was curious.

When we arrived, the people of Bil'in were already in the liberated fields. I walked towards them, through the lands that was cut in half by the ugly Wall until only days ago..now a large part of it finally lay open,with the scar of the “security road” still very visible. People were wandering around, so surprised that it had finally happened. I could also not believe my eyes. No Israeli soldiers were in sight yet.

A prayer was held on the lands that had been inaccessible to the villagers for over six years.. A sense of pride and victory was in the air, but also a profound understanding of the magnitude of the sacrifices made and the ones to come . The son and daughter of Bil'in, Bassem Abu Rahma and his sister Jawaher, both tragically killed during demonstrations, were in everybody's mind.

After the prayer, music blasted out of a truck which the dancing and singing crowd followed . The people of Bil'in certainly know how to party. Jubilantly, we made our way along a road that led up to the next section of the Wall and the settlement of Modiin Illit behind it. Just before the Wall, we joined a small group of villagers and other activists who were already building “Bil'in West”: new houses on the newly liberated lands. There was much more dancing and singing, and defiant and moving speeches, one of them by Ahmad, the brother Bassem and Jawaher. Israeli soldiers and settlers were watching from a distance, behind a Wall that has yet to fall, puzzled by a party that nothing could have spoiled that day. They could only watch as one Palestinian woman walked towards them in a calm but determined manner stride and put the Palestinian flag on the Wall, right under their noses...conveying the message that the people of Bil'in will continue their struggle until all their lands are liberated. The soldiers and settlers looked so small, the people from Bil'in were so glorious.

Perhaps this is only asmall victory, but in the seven years that I have been here, facts on the ground have only developed in one direction: more Walls, more settlements, more demolitions of Palestinian homes, more illegal annexation of Palestinian lands. Therefore, a small victory on the ground carries a huge promise. A promise that pressure works, that things can change, and that people power will not be defeated. This is just the beginning.

People of Bil'in, activists who continue the struggle week after week with all your hearts, with determination and creativity, and unshakable faith into the future and the justice of your cause, I love you.