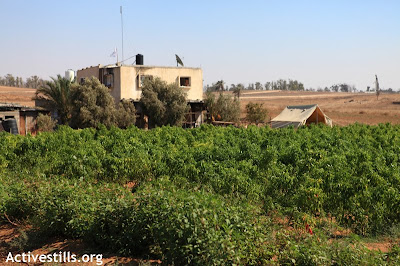 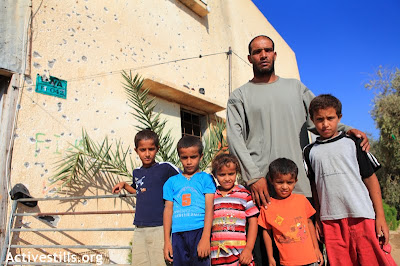 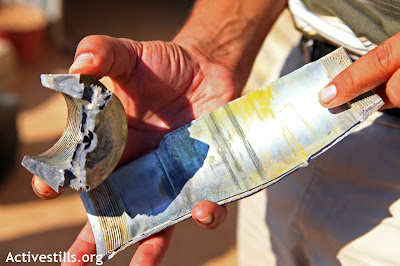 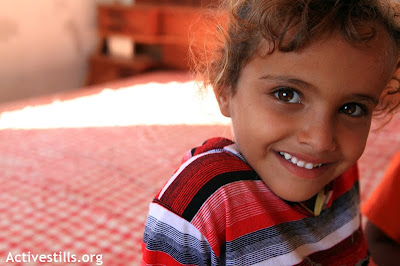 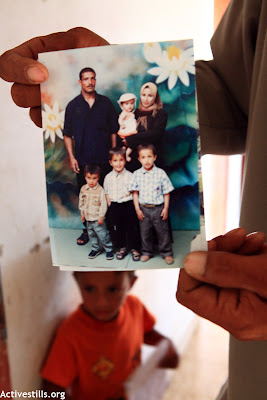 The house of the Abu Sa'eed family, home of 17 persons, is located at 370 meters from the fence. On 13 July 2010, three artillery shells were shot at the house. Following the second strike, the mother of five children, Ni'meh Yousif Abu Sa'eed (An-Nabaheen), 32 was killed when she went outside to look for one of her children who was missing. Three other family members were injured. Since then, the family lives in constant fear for further attacks. The children who are not allowed to go to the Eastern side of the house have problems sleeping and ran into the house each time they see an Israeli patrol jeep. They have to walk 5 kilometers everyday to school. No one can visit the house after sunset, and the family is then confined into the house. Shootings are recurrent. (see also al mezan' press release below)


IOF Opens Fire on a Residential House; Woman Killed and Others Injured; Al Mezan Condemns the Attack and Calls on the International Community to Intervene


At approximately 8:30pm on Tuesday 13 July 2010, Israeli occupation forces (IOF), positioned at the separation fence east of Gaza Valley, south east of Gaza City, fired three artillery shells on a residential house. As a result, a woman was killed and two other women were injured as well as the landlord. The house belongs to Jabir Ismail E'alian Abu Sa'eed, 64.


In his affidavit to Al Mezan, the landlord said that at approximately 8:30pm on Tuesday 13 July 2010, he was sitting outside his house when he heard an explosion near his house. He ran inside the house. Then he heard another two consecutive explosions and gun shots.


As a result of the attack, Ni'meh Yousif Abu Sa'eed (An-Nabaheen), 32, was killed as she sustained injures in the head, the front side of the abdomen and cuts in the thighs. She was injured while she was looking for her children around the house. Sa'eed was married and had five children. Three other persons were also injured in the attack. Al Mezan identified their names as follows:

· Sanaa’ Ahmed Abu Sa'eed (Abu Maraheel), 25, who is married and has two children, sustained injuries in the lower parts of her body;

· Amira Jabir Abu Sa'eed, 30, who sustained injuries in the right shoulder; and

· Jaber Abu Sa'eed, the landlord who sustained injuries in the right thigh.

The house was also physically damaged as a result of the attack.


The house which was attacked is located south east of the Gaza Valley cemetery. It is 400 meters away from the eastern separation fence between Israel and the Gaza Strip. Al Mezan believes that the location of the house is an important reason for its attack as the house is located in an area which the IOF usually attacks as part of enforcing the security buffer zone inside the Gaza Strip. The IOF hindered, as usually in this area, the arrival of ambulances to evacuate the injured persons. Ambulances waited for almost an hour and a half until the International Committee of the Red Cross coordinated with the Israeli side to allow them to enter the area and to evacuate the injured to Al Aqsa Martyrs hospital in Deir Al Balah.

Al Mezan Centre for Human Rights strongly condemns the continuous Israeli flagrant violations of human rights and international humanitarian law (IHL). Al Mezan deplores the continuous Israeli attacks against Palestinians even when they are not in the security buffer zone and there are no acts of hostility in the area. The IOF's attacks violate its legal obligations under IHL, particularly the Fourth Geneva Convention and the principles of discrimination and proportion.


Al Mezan calls on the international community to promptly intervene to stop the IOF from enforcing the security buffer zone inside the Gaza Strip. Enforcing the security buffer zone means taking up considerable parts of the Palestinian lands and forcibly displacing the Palestinians who live in that area. Al Mezan also calls on the international community to take prompt actions to ensure due protection of Palestinian civilians in the occupied Palestinian territory (OPT).