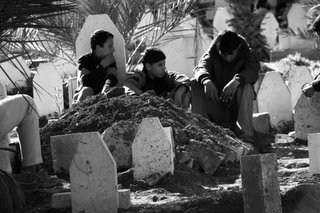 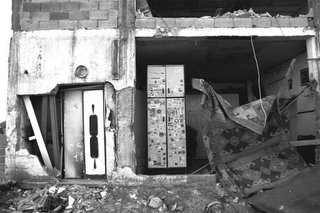 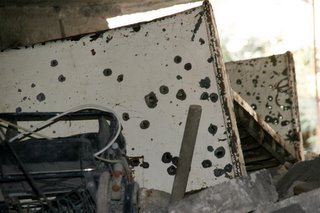 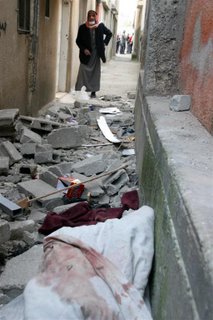 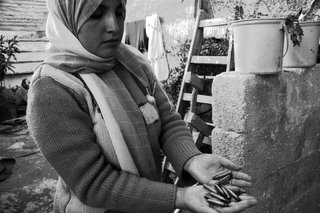 After 5 days of military invasion, the Balata refugee camp is a mess. I went to the cemetery already full of martyrs, there were still some people mourning the death of 6 from the refugee camp, including 2 teenagers. The pictures tell it all. the rumbles in the alley come from the house where the wanted militants were hidden.
the bed is riddled with bullets. Another house was partly destroyed as part of a collective punishment measure against the families who let one militant to sleep in the house. the bullets presented by the Palestinian woman come from her home. It was the biggest military operation since the withdrawal from the Gaza Strip

Nablus (Ma'an) - The Union of Palestinian Medical Relief Committees issued its findings regarding the treatment of medical crews during the week's Israeli invasion of eastern Nablus' Balata Refugee Camp.

Ma'an is reprinting the UPMRC report in full:

"The IOF took over several civilian homes, occupying them, locking its inhabitants in one room. PMRS first aid teams and ambulances were present at the site trying to give assistance to the camp inhabitants.

"* Jarir Zakaria Qanadilu, ambulance driver for PMRS: he got shot by two bullets, one in his hand and one in his left leg. Currently he is still in surgery.
* Ahmad Arabat, first aid staff for PMRS: shrapnel in the chest.
* Ihab Mansour, first aid staff for PMRS: shrapnel in his head. Ihab, while being injured, was also arrested from the ambulance, and is currently held in detention for reasons that are unclear.

"It should be clear to everybody that these current military invasions are part of a new line of Israeli provocations and are aiming for more collective punishments against the Palestinian people. Therefore Palestinian Medical Relief Society is calling the international community and its international donors to pressurize Israel to stop attacking medical personnel and to hold Israel accountable for these new war crimes, demanding an immediate halt to the continuous Israeli military invasions in Nablus (Balata refugee camp), the killing and injuring of innocent civilians and medical personnel. These acts are a violation of 4th Geneva Convention (International Humanitarian Law), leading until now to the death of at least 8 people and injuring 45."