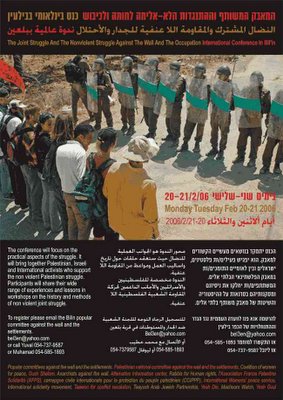 A two-day conference in the village of Bil'in, known throughout the world as a focal point of the non-violent struggle against the Israeli Wall construction in Palestine, began today with the participation of hundreds of Palestinians, Israelis and international supporters.
The Israeli annexation Wall, nearing completion on the Western side (with construction beginning in the Jordan Valley on the eastern side), is a 200-mile, 25-foot-high deemed an “Apartheid Wall” by Palestinians, who named it after the reviled South African term meaning “apartness.” In the northern West Bank, the first phase of the Apartheid Wall is approximately 70 miles long and includes electric fences, a “dead zone,” trenches, cameras, sensors and security patrols, with certain cities, like the city of Qalqilia -- a city of 40,000 people, completely enclosed inside the Wall, all at a cost of tens of millions of dollars.

The Wall does not mark the 1967 border, also known as the “Green Line.” The first phase places 45,000 West Bank acres on the Israeli side, approximately three percent of Palestinian’s land mass. The footprint of the wall itself is enormous, with as much as 8,750 acres completely lost. Construction of the wall has also meant the removal of tens of thousands of trees, severely affecting the Palestinian people's water supply (mainly based in underground wells).

The conference brings together people who support the popular non violent Palestinian movement to take part in workshops about the history and methods of non violent resistance in Palestine. Participants are focusing on the practical aspects of the struggle by sharing the experiences and lessons of such struggles at different locations in Palestine. The conference, organized by the Popular Committee Against the Wall and supported by a number of other organization, is being held in the public school in the Palestinian village of Bil'in, and brings together Palestinians, Israelis and internationals engaged in the non-violent struggle against the Israeli annexation Wall.

On the second day of the conference, participants will plant olive trees in the area behind the Israeli Annexation Wall to replace some of those that have been destroyed by Israeli forces.

Bil'in is one of several villages that have spearheaded the non-violent resistance to the Wall, as villagers find themselves separated from their land, their homes demolished and families split in two as the Wall's construction continues through their land.


Day 1:
> 9:00-10:30 Opening session.
>
> Welcome message
>
> The current state of the West Bank and the Gaza Strip under
occupation.
> The wall, the settlements, check points and travel restrictions.
> The history of Palestinian non violent resistance and Palestinian-
> Israeli-International joint struggle.
>
> 10:30-11:00 Break.
>
>
> 11:00-12:15 Presentations session.
>
> Representatives of struggles at different locations will give short
5-10
> minute descriptions of their experiences. At the end of all the
> presentations there will be a short question period. These
experiences
> will be the focus of the different workshops and and the preseters
will
> form the core of the workshop groups. The introductions should help
> people choose the workshop they wish to join. A tentative list of
focus
> struggles is:
>
> Budrus.
> Beit Likya.
> Bilín.
> Nablus.
> East Jerusalem.
> Hebron.
> SouthHebron mountain area.
>
> Break and choosing workshops.
>
> 12:45-14:00 First workshop session.
> The pros and cons of joint struggle. The workshops will discuss what
> constitutes a joint struggle, what advantages it has and what
> disadvantages. What problems are encoutered in the course of joint
> struggle and ow they can be dealt with.
>
> 14:00-15:30Lunch break.
>
> 15:30-16:45Second Workshop session. The practice of non violent
> resistance in the struggles and brainstorming for new ideas ad
methods.
>
> 16:45-17:15 Break.
>
> 17:15-18:30 Conclusions session.
> Representatives from each workshopw will present the resuls of the
> discussions to the whole assembly.
>
> 18:30-20:00 Dinner.
>
> Day 2
>
> 9:00-11:00 A discussion by the whole assembly of a joint acion to be
> taken a few weeks after the conference at different locations by the
> participants.
> A demonstration by conferece participants and the village
> people.
>
>
> [Gush Shalom is among the sponsoring peace groups]