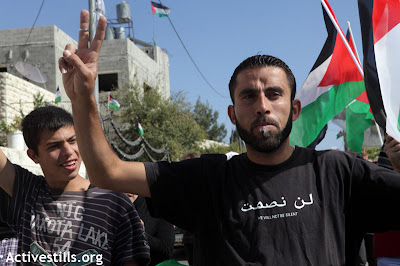 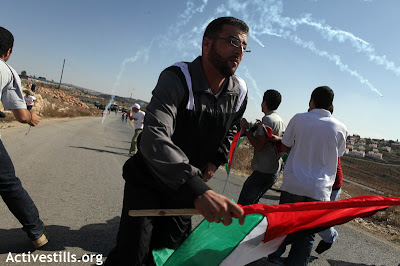 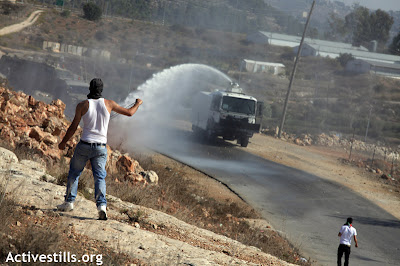 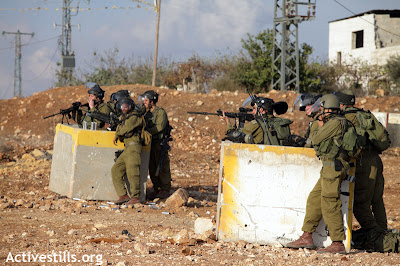 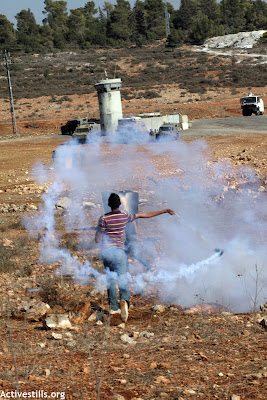 Residents of Nabi Saleh were surprised to find a group of soldiers attempting to ambush local youth at a private backyard during the weekly demonstration.

A few days after welcoming released prisoners, residents of Nabi Saleh went on their weekly demonstration. Joined by Israeli and international supporters, residents called for the release of two members of the local popular committee, Bassem and Naji Tamimi, whose trials are currently taking place at the Military Court at Ofer Compound.

The march commenced from the center of the village, shortly after the prayer. The few dozen protesters marched through the village down to the main road. They aimed to reach the village's lands and the spring that has been confiscated by the adjacent settlement Halamish.

Upon reaching a distance of approximately 100 meters from the village, the march was violently blocked by the army, which began shooting large amounts of tear gas projectiles and rubber coated bullets. The army also tried, largely in vain, to use what is known as the "Skunk", a truck shooting foul-smelling water.

Following this, clashed erupted between local youth and the army, which entered the village and took over a private patio to ambush the youth. This effort was also quite unsuccessful, as the ambush was shortly uncovered. A number of demonstrators were hit by tear gas canister and rubber coated bullets, however no severe injuries were reported.