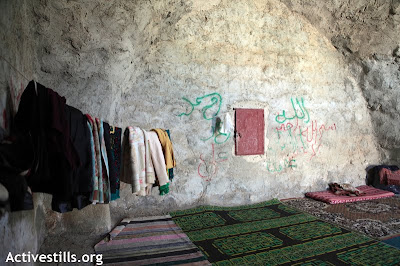 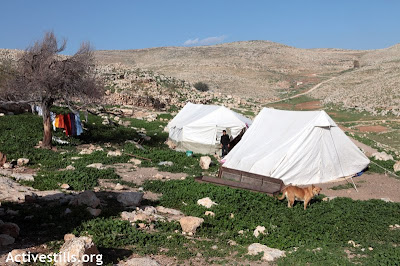 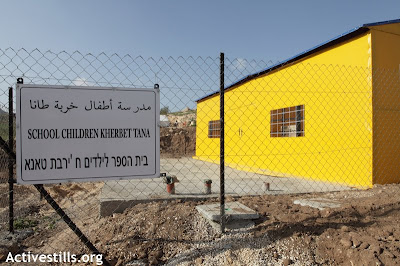 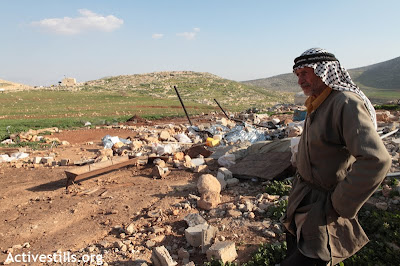 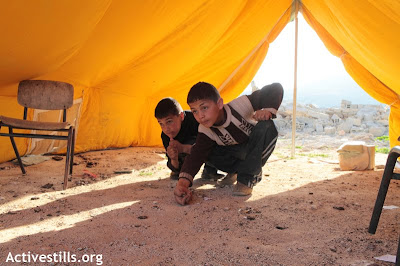 On 05.03.2011, 3 days after the massive demolition which occurred on 02.03.2011, the 250 inhabitants of the village of Khirbet Tana have to live in tents or in the mosque. All the structures of the village were demolished except the local mosque and the new school which has been built only two weeks ago. This is the 6th times the village is demolished. People started to rebuild and are still determined to stay. They said that they have no choice as they need space for the animals. (see report below by ISM)

The soldiers carrying out the demolition prevented the villagers from collecting their personal belongings, and instead buried it all under dirt. Most of what could be of use for rebuilding the village was confiscated or destroyed in order to make it harder, or even impossible for the villagers to rebuild their homes.

Some of the villagers carried their belongings to the small mosque, seeking shelter there for the night, though there was not enough space for all. The only two buildings left standing were the mosque and the school. The school, however, could be described as a makeshift: it has just been built after the last demolition one week ago. The villagers believe that is just a matter of time before the army returns to destroy this school too.

Besides all the homes and animal shelters that were demolished, the Israeli army also punctured at least two water tanks, leaving as many families without drinking water. The lack of water, food, and shelter for their herds will lead to losses of animals.

During the demolition, a young man was beaten by a group of soldiers with sticks until he reached a state of unconsciousness. The family finally managed to stop the assault by throwing water at the soldiers. At 2 pm the young man that had been beaten was feeling well enough to help his family build a shelter for the animals.

Among the people made homeless today were a young mother with her small baby. When asked where the family will sleep tonight they responded with, “under this tree”.

The residents of Khirbet Tana are trying to rebuild their homes with what materials they can salvage, but are in desperate need of building materials and tents.

According to the UN Office for Coordination of Humanitarian Affairs, occupied Palestinan territory: “Khirbet Tana is a community of around 250 people, located in Area C,2 south-east of Nablus city, in an area declared “closed” by the Israeli military for training purposes. The residents, who have lived in the area for decades, reside in basic shelters (tents, tin structures, old caves) and rely on herding and agriculture for their livelihood.

Because residents of Khirbet Tana need grazing land for their livestock, most have no choice but to stay in the area, in order to sustain their livelihood. As such, the community has repeatedly re-built modest structures on the land, including residential tents and animal shelters. In 2008, the community, with the help of the Israeli NGO Rabbis for Human Rights, lodged a petition with the Israeli High Court of Justice, requesting the preparation of an adequate planning scheme for the village that would allow the issuance of building permits. The Court rejected the appeal in January 2009, and, shortly thereafter, the community again began receiving demolition orders.

The repeated waves of demolition carried out by the Israeli authorities make it extremely difficult for Khirbet Tana residents to live in stability, sustain their livelihood, or, given the repeated demolition of the village school, educate their children. There are numerous other Palestinian communities living in a similarly precarious situation due to their location in an area declared “closed” by the Israeli authorities. “ //unispal.un.org/UNISPAL.NSF/0/9A55FFBA1724298B852578340057A2F0