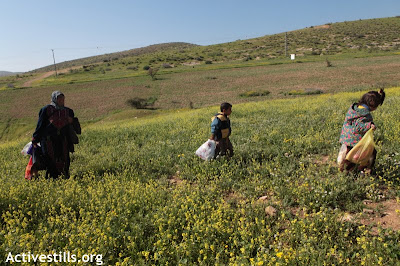 For Land day I want to talk about what happened last week in the Jordan Valley.
Last week I went in the Jordan Valley to continue my work with Activestills on forced displacement of populations. My little trip could have been almost idyllic, sleeping in a tent with a Palestinian family in a beautiful setting. Spring transforms the nature and the valley has turned green and is covered in places with flowers. Most residents of the Jordan Valley are Bedouins. They have a simple life but it has become difficult to sustain because of the restrictions on freedom of movement they face. For their livestock to have enough pasture, they used to move between several locations, but now it is almost impossible to find spots between the areas taken by the settlers, those declared "military training area" or "natural areas". It remains almost nothing left for the Palestinians and many Bedouins were forced to abandon their traditional lifestyle and go to cities.

But some resist and refuse to leave or work in the settlements. This is the case of the family Daraghma. Nabil is a Bedouin. He lives in a tent with his 4 children and his wife. They move around but for the last 15 years they have been regularly staying on a piece of lands that belongs to the Church. Last Tuesday I was in the valley with the Jordan Valley Solidarity group when we learned on Wednesday morning that during the night, a group of settlers put a tent a few meters away from the tent of Nabil. We went there and Nabil told us how he had been threatened in recent days by the Israeli army and police who ordered him to leave, of course without having shown any official paper. But Nabil refused, and “coincidentally” a large group of settlers came shortly after the middle of the night. The strategy is fairly simple: the settlers set up a tent, the Israeli army arrives and for reasons of "security" evacuates everyone. Ultimately of course the land is vacant and will soon be taken by the settlers.

I stayed all day with other volunteers with the family and also Wednesday night. The settlers were constantly making trips back and forth, armed of course with rifles and guns. The soldiers also came in late afternoon, saying again to Nabil that he had leave and that if he did not demolish his tent itself they would do it tomorrow.
The night was pretty rough. The settlers directed their spotlights at the Palestinian tent and made the most noise possible. At one point an armed settler tried also to encourage his dog to attack the dogs of the Palestinians. During the night settlers attacked the animals by throwing stones at them. We could hear them laughing and walking around the tent. They also urinated on the water tanks of the Palestinians. The next day I had to leave but Keren, another photographer from our photo group, replaced me. She stayed with the family and called me the next day to tell me that the tent had been demolished. The family refused to leave the tent and had been dragged out by soldiers as well as some Israeli and international activists who were with them. Everyone was pushed down to the road and the area was declared a closed military zone until the next day 7am. The family was therefore in the street without any of their things. With the help of volunteers they tried to rebuild a tent, but the Israeli police immediately came to tell them that it was forbidden. The settlers also left with their tent, but they had succeeded : a Palestinian family was evicted from a land they covet.

The Daraghma family spent the night in the tent that serves as a school. The next day I joined them for the grim task of recovering their belongings which were all buried under the destroyed tent and of moving elsewhere. The whole family climbed the hill and in silence collected their things and out them in a tractor. They also recovered the structure of the tent, but some parts were broken. Tomatoes and cucumbers, the small gas cooker, everything was still in place under the destroyed tent. The children were remarkably calm and helped as much as they can. Then we went a few miles away to Al-Maleh. I watched the mother behind its Palestinian children carrying bags as they walked from the road to reach to their new place. Looking at them, I could only think back to those images of Palestinians in 1948 when they were driven from their villages and took the road with their things. The Nakba, the catastrophe as the Palestinians call it, continues today but in a more insidious way, slowly but surely.

With the help of everyone, the tent was up in a few hours, still with some parts missing because some of the bars were broken. A plastic cover was given to replace the torn one.

Even with the tent up, Nabil did not seem so relieved, he obviously knew that the army might come back. And indeed in the afternoon the soldiers visited us. The army initially tried to play the intimidation trick: "you have 10 minutes to go and demolish the tent!" A soldier also told Nabil that they monitored him 24 jour a day and that they would destroy his tent wherever he decides to put it: he must go to Tubas, they said. Tubas is the nearest town, and Nabil has twenty cows: where is he supposed to put them? The army also tried to play the “nice” tome trick: they wanted to make Nabil believe of he goes now, then after two weeks they would forget about him and that he could come back.
But Nabil was not fooled and refused to leave. And when we asked the army to show the demolition order, the soldiers told us that they would bring it the next day. The soldiers are really acting like cowboys, brutal and arrogant. They think that if they just bark at the Palestinians, they will leave their lands, but the soldiers are unable to see how deep the roots of the Palestinians are. They will not be able to uproot them.

I spent another night under the tent with the family. All our mattresses were bonded as if that would protect us better, unless this was just one way to keep warm. The night was quiet, the stars were beautiful, and everything would have been perfect if it was not the fear of being awakened by the soldiers. I left the next day, asking myself if I'm going to see again this family walking with their bags to their next destination, leaving room for settlers and soldiers who can not even leave a family of 6, their 20 cows, their horse and donkey in peace. This is just one example but the multiplication of the similar cases indicates a clear policy: that of a forced population transfer from the zones "c" (areas of the Palestinian that are totally controlled according to Oslo agreements by the Israelis) to areas "a", areas which are “controlled” by Palestinian Authority.

I just learned that three Bedouin families have also received notice of evacuation. Tomorrow I will return to the valley.