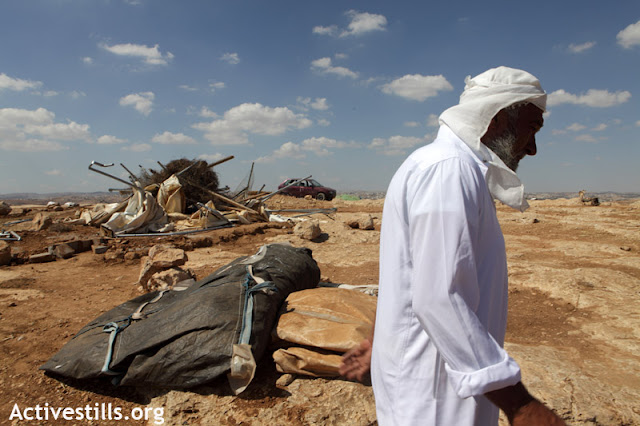 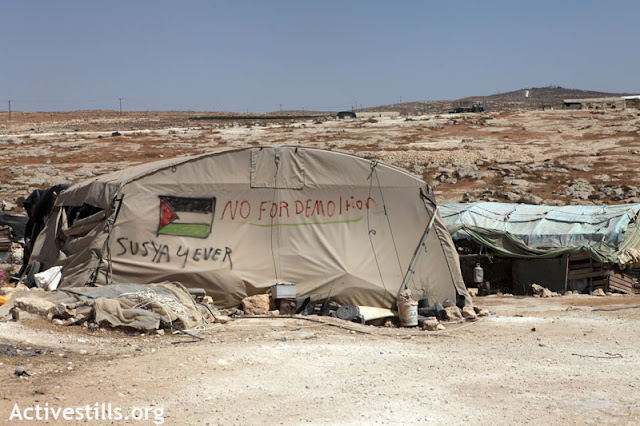 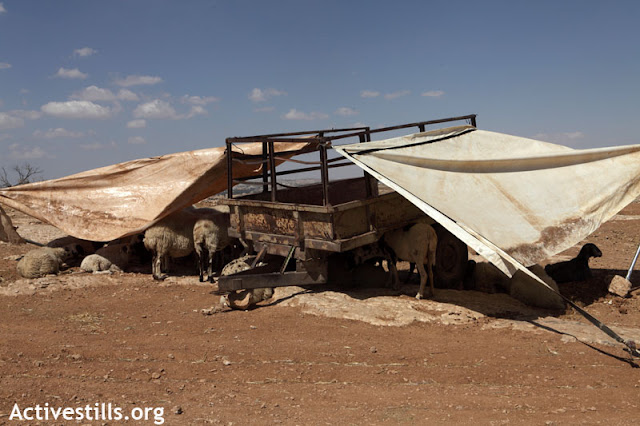 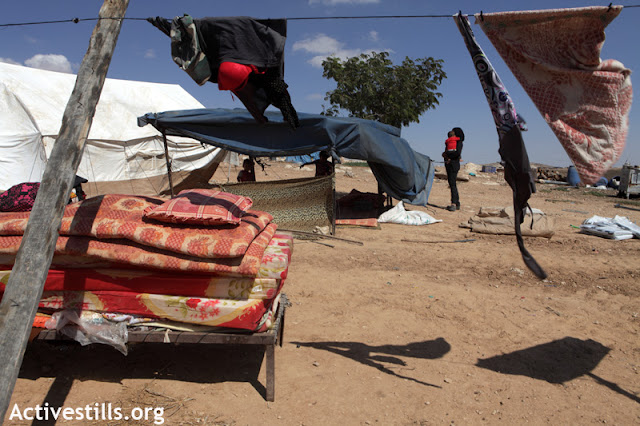 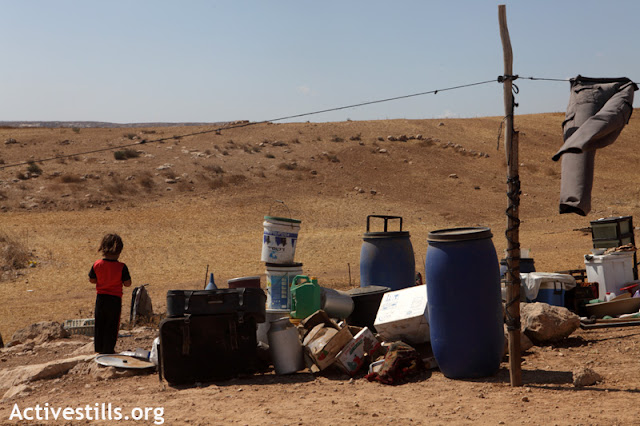 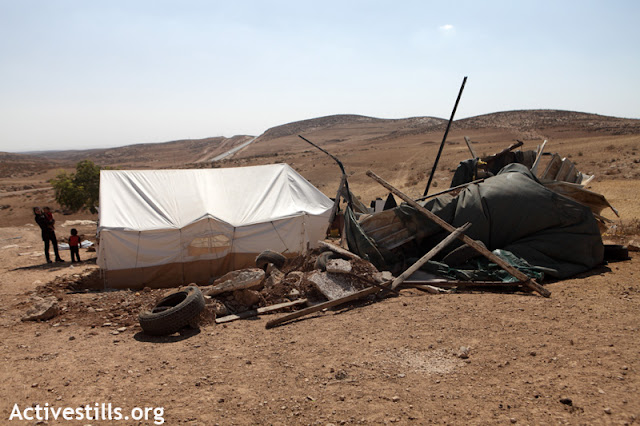 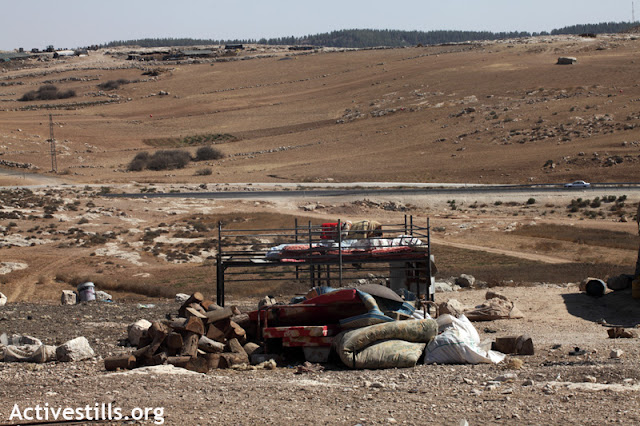 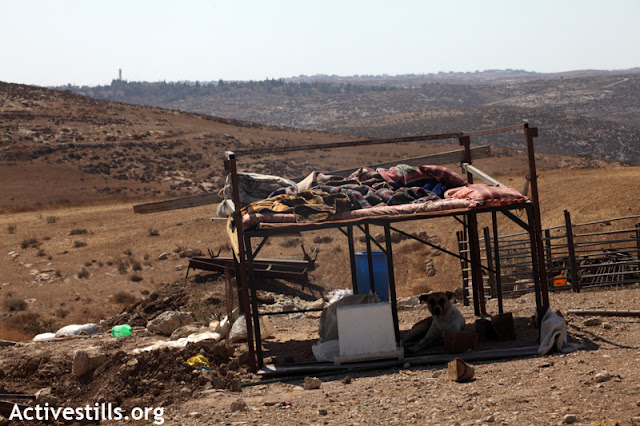 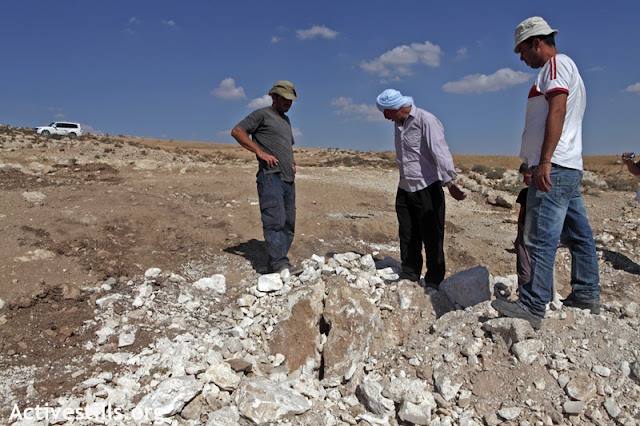 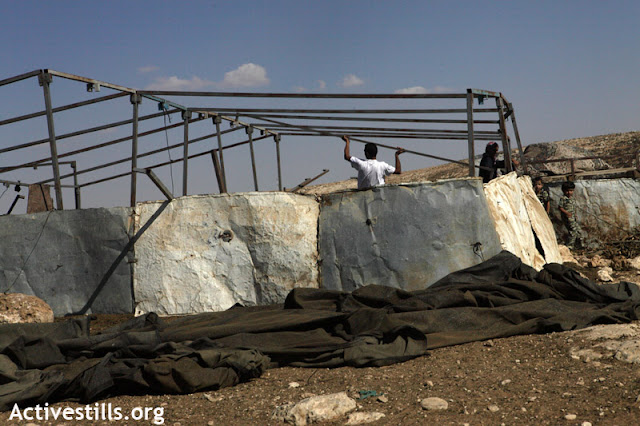 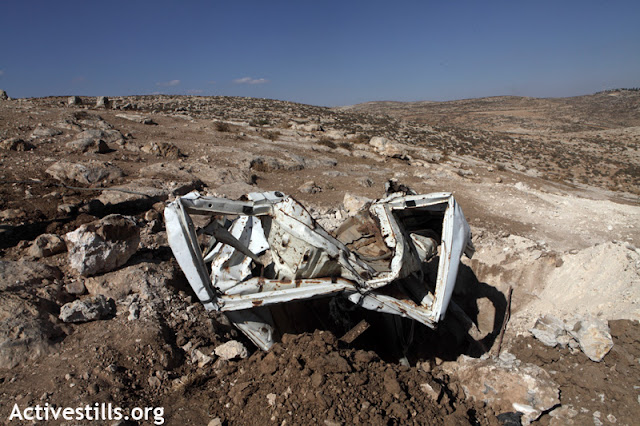 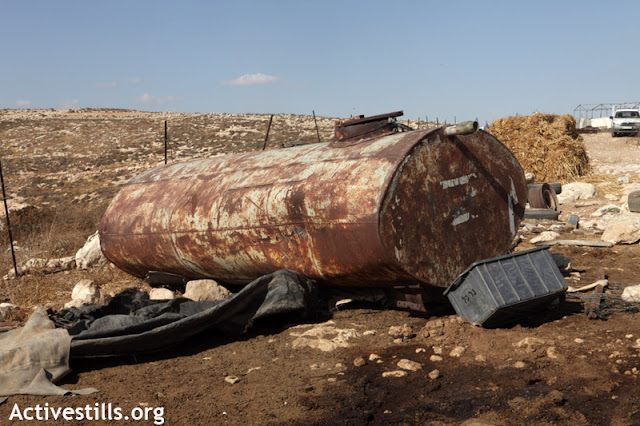 This was another day of demolition in South Hebron Hills. The same day that an Israeli judge absolved the Israeli state of its responsibility in the killing of US activist Rachel Corrie, crushed to death by an Israeli military Caterpillar bulldozer.
Water wells  were especially targeted. In total 5 were demolished. Without water, people cannot stay as it becomes too costly to buy water tanks. 2 residential structures were also demolished; leaving more Palestinian homeless. 9 animal shelters were also demolished; leaving the sheep under a burning sun. The same day, other demolitions took place in Jericho and in Nablus area.

Report by Sean O'Neill on +972 on one of the demolition:


Zenuta, West Bank – At around 10 a.m. on Tuesday, a group of Palestinians from the village of Zenuta watched from across a valley in the South Hebron Hills as two Israeli army bulldozers suddenly appeared and destroyed their village’s water cisterns, cave dwellings and stables. The village, divided by a valley, is just 3 kilometers from the Green Line, at the southern tip of the West Bank.
The bulldozers in Zenuta were accompanied by five army jeeps, three vehicles from the Israeli Civil Administration, and a charter bus of Israeli soldiers, trying to keep activists and members of the press from entering the village. A group of about 20-25 Palestinian men, women, and children who were there at the time sat in front of one of the bulldozers in an effort to stop them. They were quickly removed, however, by the army and the destruction commenced.

In total, four water cisterns, two caves, two houses and six stables were destroyed. Zenuta is a small village of seven families with a herd of 400 sheep.  The army destroyed the houses of two families, each with seven children, as well as six stables holding sheep. Perhaps most devastating of all in a region starved for water, the army bulldozed the village’s cisterns, holding water collected from winter rains.  The cisterns cost NIS 15,000 each, an incredible toll amounting to about a year and half’s wages for the average Palestinian worker in the area.  The cisterns had been filled with water after a winter that brought the best rainfall in at least 10 years, according to residents of the area.  Now two young boys walked around with the only two bottles of water left in the village offering it to visitors.
Mohammed Khaled Samamry, the owner of one of the houses destroyed, was indignant.  “Can you live without water?” he asked, his hand trembling slightly with frustration.  ”What can we do without water?  What can we drink?  You see what they do to us, the Israelis?  They left the kids sitting under the sun, the sheep in the field.  Where will we sleep tonight?”
A handful of children sat quietly, shocked and sad, in the midst of twisted metal rods and pots and pans scattered on the ground.  The sheep wandered aimlessly in a field, nibbling at the straw.
According to Israeli activists, three tents were also destroyed Tuesday morning in Susya, a nearby village that is under threat of demolition. The tents were built by the UN’s OCHA department, and were destroyed by the army once before, last November.
The destruction comes in the midst of a wider threat to the villages in this region. In July, Israel issued orders to wipe out the nearby villages of Jinba, Farkheti, Majaz, Sfai, Khoruba, Tabban, Mirkez, and Halawah. Demolition orders have also been issued for structures in the villages of Mufagara and Tuba. In all, over 1,500 residents are at risk of losing their homes.
Sean O’Neill is a freelance journalist based in Jerusalem. Mairav Zonszein contributed to this report.