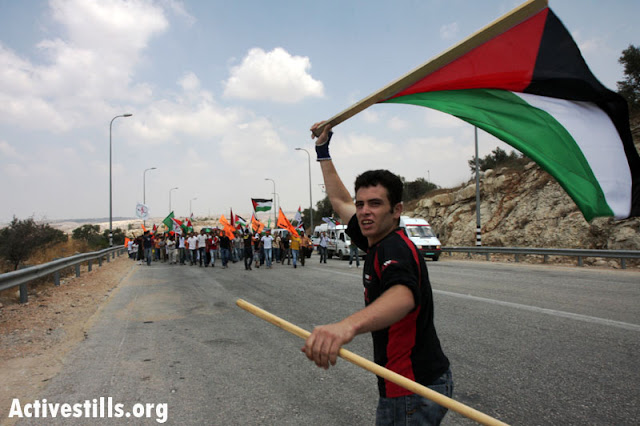 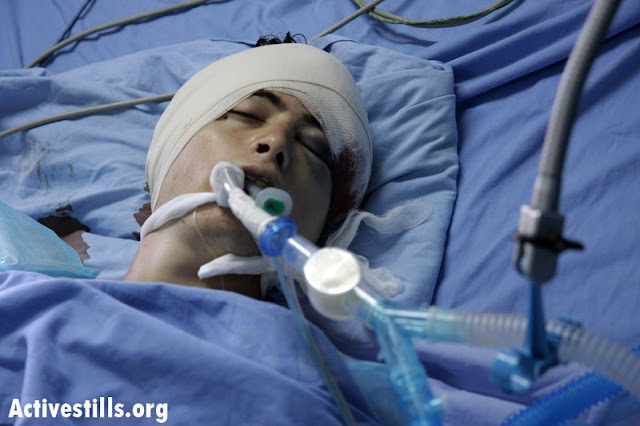 Today the village of Ni'lin commemorates the 4th anniversary of Youssef Amira, killed by shots at close range by an Israeli soldier during clashes after the funerals of 11 years ol Ahmad Mousa, killed also the day before by a bullet in the head.

As I cannot go to Ni'lin today, I would like to share again a text I wrote at that time. After Yousef three more young men had been killed during unarmed demonstrations in the village of Ni'lin alone. We do remember. The struggle continues.

I wish I had met you before seeing you in that cold hospital room. Maybe you could have showed me the olive tree fields around your village, Ni'lin and told me the stories about you parents, your grandparents and maybe even about your girlfriends. You could have told me about your dreams and your hopes. I am sure you had plenty as all the teenagers do. Do you know that I found the olive trees around your village some of the most beautiful ones that I saw in Palestine? And I saw many. They are so old, and so majestic. It looks that they have been there forever, they belong to the place and the place belongs to them. They have now become the silent witnesses and sometimes even the victims of the drama that takes place every week. I almost cried during a demonstration a few weeks ago while some of them were burning because of the tear gas canisters that the Israeli soldiers shot. It was so hot that they triggered a fire. I took a picture of a very old Palestinian man who watched helplessly the fire; he was holding an olive tree branch that he used to try to contain the fire. At one point he just stopped and stared at one of the olive trees. Just its trunk remained and it was already black. I took the picture and I could not move. Then I found out that it was his trees burning that he was watching. Were you in that demonstration too? I am sure you know this old man because everybody always knows everybody in these villages. Everybody stands together, something we have often lost in Europe. But maybe you were one of the young men who was dreaming about leaving. Not because they do not like their country but because they want a taste of the freedom, and who can blame them? Maybe you just wanted to go to university at first. I could not ask you at the hospital. You could not speak, you were lying in a bed, and I thought you were already dead. Then I was even surprised to see your chest moving. You were breathing but through a machine, a pipe stuck in your mouth. Your head was swollen and there was blue around your right eye. I did not stay long, I understood that you would be gone soon and I did not want to disturb your sleep. I said a prayer, even if I do not really believe in God, just sometimes, and even if the God I was praying was not the same as yours. Or maybe they are, what do you think?

There were many people outside for you in the corridors, even your aunt who came from Jordan. Your father seemed lost, and I met your cousin Yunis who told me exactly what happened. He could see everything from his building. He told me how after the funerals of Ahmed, the 11 year-old boy who was killed the day before by the Israeli army by live bullet in his head, some youth went to throw stones at the Israeli soldiers; long after all the journalists and internationals left. No witness around. You were walking to your uncle’s house and you stopped to watch the clashes. Then the Israeli soldiers went inside the village to chase the youth. They entered with a military jeep. You knew how afraid the soldiers are. All the young men and children ran away but you did not; or maybe you did not hide from them well enough . The jeep stopped around 10 meters away from you, and two shots were fired at you, directly at your head, two rubber-coated bullets. Of course from such a short distance, all soldiers know that it is lethal. No mistakes there. The jeep and the faceless killer who shot you just drove away. You collapsed and lost a lot of blood on the pavement. When the ambulance tried to leave the village, the soldiers stopped it and searched it. Again some crucial minutes were lost, and your soul was already flying away. Did you see that coming? I wonder if you realized at the moment when the jeep stopped that they will aim at you and shoot.

Do you know that a photographer of my photo group, Activestills, took a picture of you during the funerals of Ahmed? You stand in the corner of the photo on the right. As if you wanted to be already out of the frame. But we cropped the picture and we put you in the center. They always put in newspaper- one 17 year-old Palestinian dead but we never see the face of the victim. We wanted to show yours. You looked nice in it, even if it was in a tensed moment of the funerals, when we arrived at the entrance of the village with the body of Ahmed and when the soldiers threw tear gas at the angry crowd. They even threw tear gas at the ambulance that was carrying the body of the boy. You looked strangely calm in this chaotic moment. You must have been a strong young man with some strong character. I wonder if we should take a picture of all the young men of Ni'lin, just in case they might be killed or injured. Because I am sure it will happen again, and again. Your village is very strong. The demonstrations against the Wall take place several times a week. The people; Palestinians, Israelis, and internationals stand together and even sometimes manage to stop the work of the bulldozers which destroy your lands. Ni'lin has become one of the focal points of non-violent resistance and the Israeli army clearly decided to break the spirit of Ni'lin but it has clearly failed so far. The Israeli soldiers have become increasingly violent weeks after weeks and so many have been already injured, but they continue.

When you looked at Ahmed’s body being carried by the crowd. Did you think you could be the next martyr? Death has become so trivial here, does it changes its meaning? Some people even say that the Palestinians do not value life anymore and that they glorify death. But in front of the hospital, I was in a car next to the one in which your father was sitting. And I saw him quietly crying. He would not have done it in public, he waited to be more isolated. Then during your funerals, I went to your house and your mother was devastated. She even fainted. All the women helped her and tried to comfort her. Then she waited with many other women on the balcony, waiting to see you for the last time when the men would carry you to the cemetery. I waited there, in front of the balcony, your mother had difficulty even standing. Then she saw you and cried even more. What is more terrible for her mother to see her child dead? You must be comforted somehow to know that they will be well surrounded, but for sure they will miss you until their own death.

When I heard the news about you I could not believe it. Just one day after Ahmed was killed, they dared to kill another one…in cold blood. Nobody will be indicted nor punished. We do not even know the name of the one who killed you. Then the Israeli authorities dare to continue saying that the Israeli army has some of the highest standards in the world. But Youssef, don’t worry the world is beginning to open its eyes and I believe that these crimes will not go unpunished. The soldier knows what he has done, and something bad will happen to him, in this life or in the next one. He cannot just get away with it. They will not. Justice always wins, it is just a matter of time.

It was good to talk to you, Youssef. It took me some time. After the funerals, somebody told me that I looked tired and that my eyelids were swollen. I replied that it was because they were full of tears that could not be shed. They are now coming back quietly. I cannot cry when I take pictures, they will be out of focus and the story needs to be told. I can cry when I write. There are thousands of us who write, take photographs, film, demonstrate and shout, tearing down the veil of ignorance which hides the naked truth. Don’t worry; Youssef, it is just a matter of time.