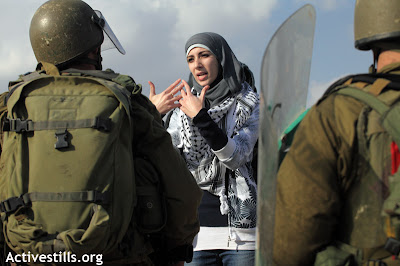 The following took place Friday, November 25th in the village of Nabi Saleh during its weekly protest against the Israeli occupation. A group of protesters managed to reach the hill, where a few hundred meters below was the village spring the illegal settlement of Halamish took by force. If you’re not an Israeli settler (or their ilk), you are prevented from getting even close to the spring.

“Watch out. You might get hit by a stone.”

For a split second, various images flitted through my mind. One was me throwing my head back, convulsing and positively howling at a full moon in a deserted forest. Another was a perverse natal instinct to hug the soldier, before throttling him into seeing reason. The third was a kaleidoscope of colors. It wasn’t a full scale explosion, but my mouth became unhinged with “dignified” fury.

“You dare to stand in front me, and pretend that you care about my safety? You’re pretending to be worried if a rock hits me? How dare you, when you come here every week—and not just on Fridays but throughout the week— and terrorize this village by spraying them with skunk water, firing tear gas and rubber bullets and live ammunition at their children, at the women, the men! How many children have you arrested? How many houses have you raided? How many have suffocated from the tear gas fired deliberately in their homes, how many kids have you fired at? You don’t care about any of that!”

His little comment solicited the same reaction from the other sabaya/young women around me. We were shouting over each other, then pausing to listen, then picking up on each other’s sentences with added vitriol.

“Anyway,” I added, more calmly. “These stones have a special homing device built into them; they only hit occupiers.”

Two rocks then crashed into the protective shield of one soldier standing to my right. The one in front of me was completely flummoxed.

“Fuck Brooklyn.” His muddy green eyes were shocked. At that moment, it hit me. I felt so sorry for him.

The commander then marched up. “Go back ten meters,” he barked.

We stayed where we are. If we were guys, there would have been pushing, shoving, anything to provoke us and for them to justify firing from close range. But we were four Palestinian women with a few other Israeli and international activists. Never underestimate the regal wrath of Palestinian women. We will go batshit crazy on you.

Ah, the order turned into a request, which brought about another stab of the kaleidoscope colors.

My sister and her friend were enjoying themselves a bit too much with their directed banter at them:

“Do you bleed differently from me? We bleed the same blood!”

“Free your minds! Zionism has imprisoned you!”

“You are a victim of your own government’s policies!”

“Put down your gun, we are protesting peacefully!”

A couple of teenagers baffling the Israeli soldiers in front of us by tearing into their state-fed propaganda. I was thoroughly amused, to say the least. I turned to another soldier.

“Isn’t this much better than firing tear gas canisters at us? Look, we’re having a dialogue! We’re talking. We’re not negotiating, since that would imply two equal parties, but we’re conversing!”

One of the girls pointed to another soldier’s face.

“From the rocks you throw at us.”

Kids with guns. This was a new unit. A young, scared unit who broke their own rules by replying back.

It was such a ridiculous situation. I touched his submachine gun. “Look at you, decked out like you’re about to face an army. You’re wearing a helmet, knee pads, bulletproof vest, and this gun of yours that shoots sound bombs and tear gas and bullets. We are armed with nothing. Do you realize how stupid you look?”

“You are armed with rocks.” The eyes shifted, the feet shuffled.

Mr Muddy Green Eyes. I felt so sorry for him.