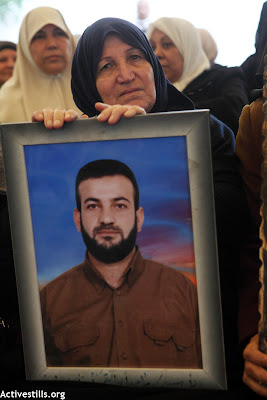 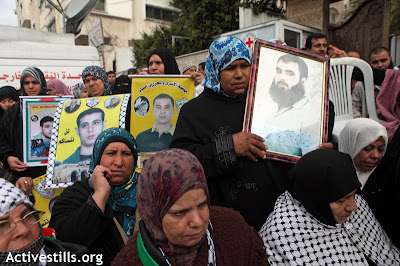 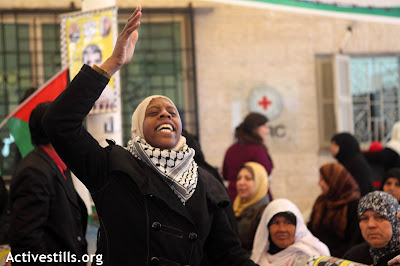 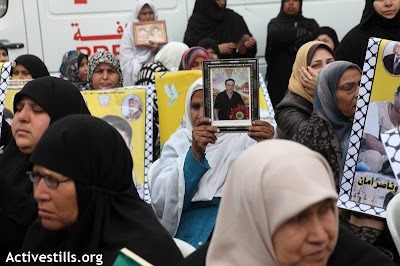 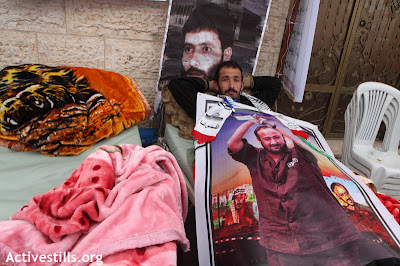 Palestinian women hold pictures and posters of their imprisoned relatives during a protest calling for the release of Palestinian prisoners from Israeli jails outside the International Committee of the Red Cross office, Gaza city, on Monday, February 6, 2012.

Last photo: A Palestinian who is on hunger strike in solidarity with Khader Adnan, is seen lying on a bed covered with a poster of Fateh emprisoned leader Marwan Bargouthi in a protest tent in front of the International Committee of the Red Cross, Gaza city, Monday, February 6, 2012.
Khader Adnan, who was taken by Israel soldiers from his home in the village of Arabe near Jenin, on December 17, 2011, is protesting his treatment by Israeli prison authorities and the practice of administrative detention. He has entered his 51th day of hunger strike.

Otherwise Occupied / For the sake of his dignity

After over 50 days of hunger strike against what he terms humiliating Shin Bet interrogation techniques, Khader Adnan's health is deteriorating.

Khader Adnan has already broken a Palestinian record for the longest solo hunger strike. Yesterday he passed his 50th day as a hunger striker, protesting what he regards as humiliating practices exercised by Shin Bet security service interrogators. Posters displayed at support rallies have above his portrait the statement: "Dignity above food", a statement repeated in a Facebook page titled "We are all Sheikh Khader Adnan."

On January 8, 22 days after he was detained in his home in Arabeh in the northern West Bank, a four-month administrative arrest order was issued against him, owing to his "activity as a member of the Palestinian Islamic Jihad, which threatens the region's security." Last Thursday, Palestinian Authority Prime Minister Salam Fayyad met with the hunger striker's father in Ramallah, and declared that the entire Palestinian people expresses solidarity with Adnan. A member of Adnan's organization warned about possible consequences, should he perish.

On the night of December 17, masked soldiers raided his home, aiming their rifles at family members, elderly parents, a pregnant wife and two daughters. This account was provided in an affidavit submitted to an attorney engaged by the Physicians for Human Rights NGO. Adnan testified that his hands were tied behind his back, and that he was thrown onto the floor of an army jeep; during the journey in the vehicle, he says, soldiers kicked and slapped him. The jeep reached the Mevo Dotan settlement, where (he says ) he was held for several hours outside, in the cold, with his cuffed hands swelling. His lower lip was cut and bleeding.

The next day he was taken to the Kishon detention facility, for Shin Bet questioning. In his affidavit, Adnan testifies that he was tied to a chair and positioned in an excruciatingly painful way. Throughout the interrogation, he remained tied, his hands behind his back. Adnan says that Shin Bet questioners cursed him and threatened harm to his family. Was the moment he heard his wife and daughters being cursed when he decided to launch his hunger strike? Or was it when the interrogators forcibly yanked his beard? Or was it when one of the interrogators rubbed a finger on his shoes, and then smeared Adnan's moustache? Or was it when they did not allow him to pray?

He learned that he was an administrative detainee belatedly, on January 10, and this added a new motivation to his hunger strike: The protest is also against the fact of his detention without trial. Last Wednesday a third "judicial review" session was held at the military court for administrative matters, regarding the administrative arrest order. As in the preceding session, he was wheeled in a wheelchair into the caravan where the sessions are held. Military prosecutor Lt. Tamar Lejlem asked military judge Dalia Kaufmann to "authorize the administrative arrest order for the entirety of the requested period, owing to classified information which I will submit on a unilateral basis to the court. This is a senior member of the Palestinian Islamic Jihad who is involved in organizational activity, and who was imprisoned in the past and has returned to subversive activity."

Five attorneys were on hand to represent Adnan: Jamil Khatib, Tamar Peleg, Mahmoud Halabi, Mahmoud Hassan, Jawad Boulos and Nivin Hassan. This proliferation of attorneys bears witness to concerns about his deteriorating health and the implications.

The process of opposing administrative arrest turns into a guessing game, or a game of tag in which one side is blindfolded while the other side has a full view of events. There is no indictment, nor is there evidence to dispute. Questions posed by defense attorneys have the aim of causing the military court judge to review critically the order to deny an individual's liberty without allowing him or her to stand trial.

Peleg turned to the prosecutor, saying: "I understand, and ask for confirmation, that the questions asked during the interrogation of my client by the Shin Bet express the main suspicions pending against him, suspicions which presumably are reinforced by the classified information."

The prosecutor rejoined: "The secret materials are more expansive than what has been disclosed."

Peleg: "I am talking about the type of suspicions, and not their amount."

The game of ping-pong continued in this fashion. As it concluded, Peleg stated: "The conclusion is that there is no intelligence information that warrants the administrative arrest, and, in particular, that the security officials do not have the option, nor do they have a desire, to put the accused on trial."

The detained man was given the right to speak. "I will begin with what happened just a few moments ago," Adnan told those present in the courtroom. "You went out to eat, in rooms that are surely heated and comfortable. I went off to the waiting caravan for detainees, despite my condition, and it was very cold. The doctors tell me that perhaps because of the fluctuating heat and cold, I might quickly develop cardiac problems."

Last Tuesday he was moved from the Israel Prison Service medical facility to a private hospital in Bnei Brak. His legs and arms were cuffed to his bed. Three wardens sat in his room round the clock, smoking and chatting. Adnan initiated his hunger strike in the name of dignity, but "the insults continue," he told the judge. He added: "when the wardens come into my room, they reach under the pillow and joke about how I might be hiding food. I have a Koran which I read, holding it with a handcuffed hand. Yesterday I prayed in a chair, with my arms and legs bound." The judge's decision concerning the future of the administrative arrest order is pending.

The Prison Service spokesman relays: On January 17, the ethics committee for the rights of a patient (an external committee ) spoke with the detainee and concluded that he does not want to die. Thus the committee decided to respect his wishes, and not force medical treatment upon him. At the end of the hunger strike's 44th day, and following the submission of a medical report saying that his health is in genuine danger, the committee convened anew, this time with a religious figure (a Kadi ) in attendance, and the religious delegate met privately with the detainee.

"After it was made clear to the detainee that the committee is considering the forcible administration of an infusion, he agreed to be taken to a hospital for an examination, and the condition that he meets with a doctor sent by Physicians for Human Rights. On the advice of this doctor, he agreed to take potassium tablets, and he returned to the Prison Service medical facility. After he announced that he would stop drinking water, the committee decided to allow a Prison Service physician to administer intravenously salt and sugar [this has not happened].

"Last Tuesday, at the Prison Service request, the detainee was taken to the Bnei Brak hospital. There, he once again drank water, and met with Red Cross representatives and also the kadi. On Thursday, he was taken to a Jerusalem hospital. That day, the Prison Service consented to the detainee's request, and furnished unusual authorization for him to meet with family members." So ends the Prisons Service statement.

It should be noted that as of last night, his family has still not been allowed to visit him.

According to the military spokesperson's office, following the information relayed in Adnan's affidavit to Physicians for Human rights, the military prosecution has instructed the military division of investigations to investigate the circumstances of his arrest.

By press time last night, the Shin Bet had not responded to this report.