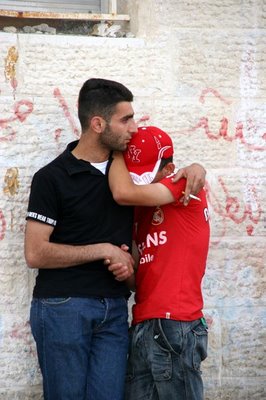 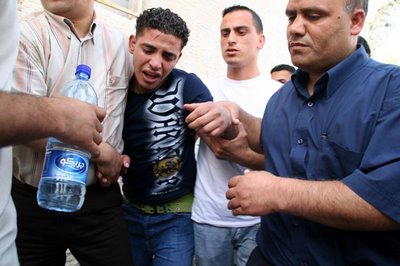 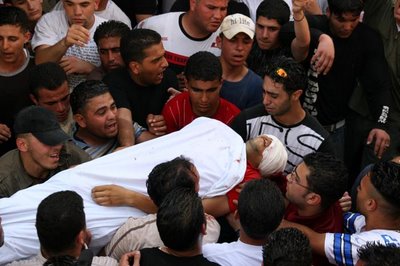 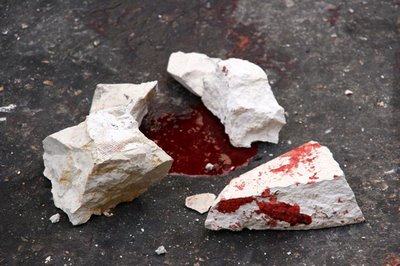 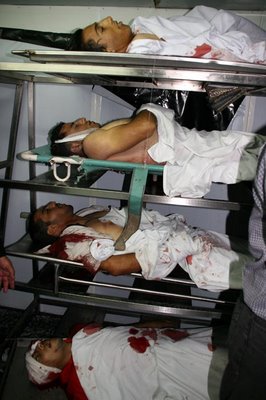 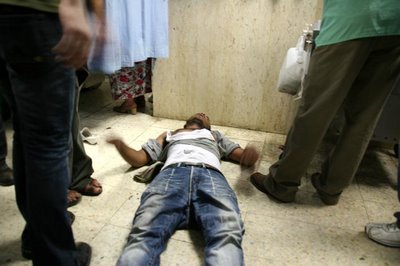 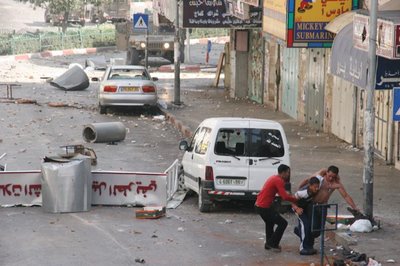 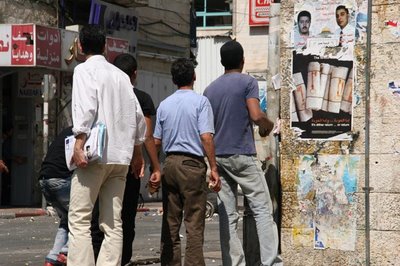 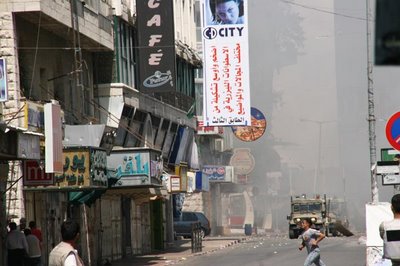 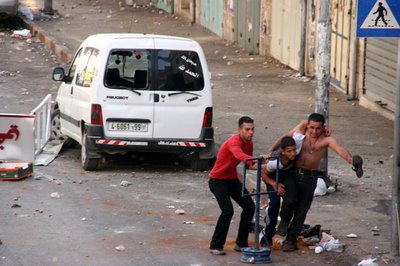 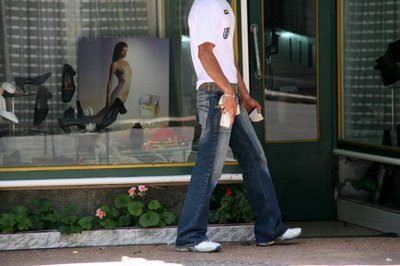 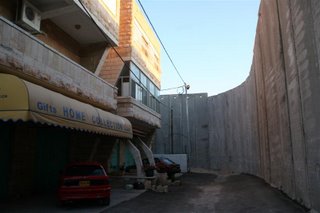 La colonisation avance a Bethlehem/ the colonization continues in Bethlehem 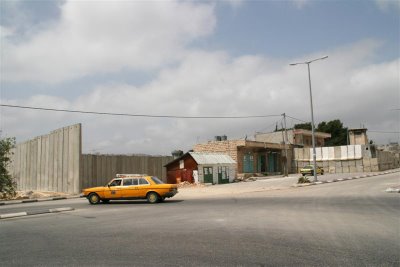 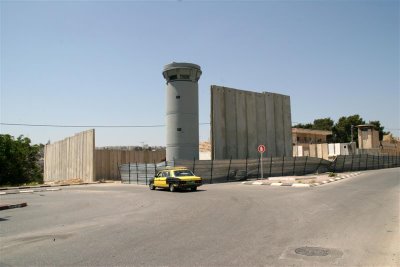 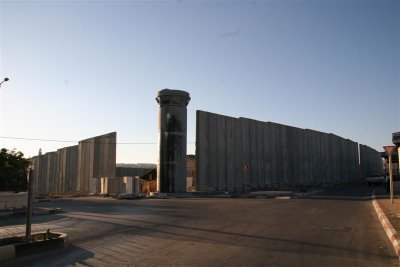 23 May 2006. Pictures taken from the same spot. Within a few weeks; the Wall around the new colony, which will include a synagogue, continues to be built. One Palestinian shopkeeper is inside this square and is now surrounded by the Wall and miliyary towers. We are in the middle of Bethlehem; next to Rachel's tomb, an important religious site for the three monotheist religions which has be transformed into a synagigue and whose access has become restricted to the Jews. We are also just ext to Aida refugee camp. The synagigue will be built just a few meters away from the Muslim Cemetery!
No comments: 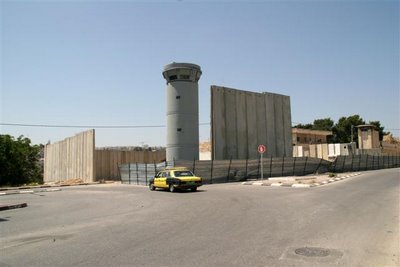 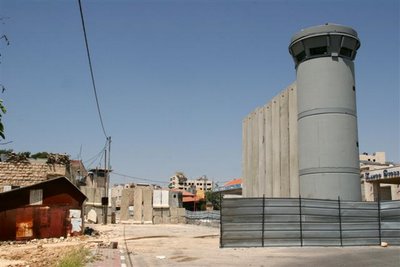 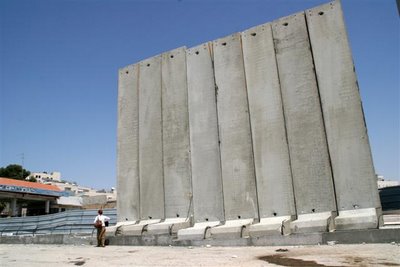 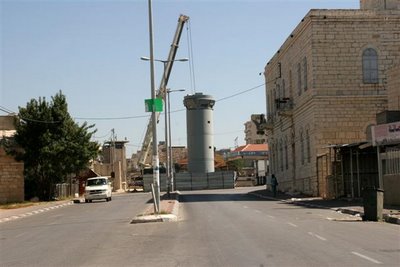 Again today I had a shock. Last night the Israelis put a new military tower next to Rachel’s tomb where they plan to build a new colony; including a synagogue. The new military towar is in the middle of the road. The tower is monstrous and adjacent to it they also begin to build a new section of the wall. We are in the middle of Bethlehem and nobody is saying anything. The colonization continues. Last time I met the Palestinian who has a shop on this area. His shop is just next to the building that is the new colony. Now he is completely surrounded by walls, as he was buried alive. Today he simply could not talk. He was just too upset and had tears in his eyes. He knows that soon he will lose everything.
Another news: the hospital in Bethlehem announced that they will lack medicine and will have to close some departments next week because of lack of funding. Tonight all these just make me sick.
No comments:

Gaza- Ma'an- Medical sources in Shifa'a hospital in Gaza City have said that three Palestinians suffering from kidney problems died as a result of a lack of medicine due to the siege of the Gaza Strip.

Director-General of Emergency and First Aid in the Ministry of Health Dr. Mo'awiyah Abu Hassanain warned of the dangers facing 600 Palestinian children because of the shortage of kidney medicines. He indicated that 150 children need frequent kidney dialysis.

The sources named the three people who died as a result of a lack of medicines as Mohammad Turk, Mohammad Helow, and Shaban Lulu. They needed dialysis but due to the shortage of medicines, the frequency of the process had been reduced.

Dr Abu Hassanain confirmed that the hospital is suffering from a crisis in terms of supplies of medicines and he said this is increasing the suffering of the people and the number of people in need of dialysis. Dr Abu Hassanain warned of a humanitarian disaster in the Strip.
No comments:

Mourning a West Bank wife
Matthew Price - BBC News
May 2, 2006
In a small room on the edge of Tulkarm, they are wailing for 44-year-old Eitas Zalat.

There are tears, screams, and whimpers. Women turn to me in sorrow, and in anger.

Eitas Zalat was a mother of five. She was killed at dawn by an Israeli army bullet while sitting in her living room.

Now she lies on a stretcher on the floor. Women kiss her face, and then collapse.

Outside one of Tulkarm's mosques, as the people of this impoverished West Bank town prayed, I spoke to Eitas Zalat's husband.

Yousef Zalat is an English teacher. He is still - I think, as we speak - in shock.

"I feel just like an ordinary man who lost his partner," he tells me.

"We were sitting next to each other and the Jews shot her while we were speaking together. There were no weapons, there were no bombs. Why they do this? Why?"

In a place as complex as the Middle East there are many answers to that question. Two are worth noting here, I think.

The first is the Israeli army's answer. I called the spokesperson's unit and was told Israeli soldiers had gone to Tulkarm to arrest a leader of the Palestinian militant group Islamic Jihad.

Such arrests are an almost nightly occurrence across the West Bank.

The Israeli army said they surrounded a building they believed he was in. They called for people to leave the apartment building. No one did.

Then - the army says - soldiers saw a "suspicious movement" at a window. They thought they would be fired at, so the soldiers opened fire at the house.

Mrs Zalat was killed. The army says it made a mistake. It has apologised.

That is one possible answer to Yousef Zalat's question, "Why?"

Another comes from an Israeli human rights group, B'Tselem.

The circumstances under which Eitas Zalat was killed, the group says, "raise the grave suspicion that Israeli security forces acted as if they were conducting an assassination rather than an arrest operation".

B'Tselem says that between January 2004 and 1 May 2006, 157 Palestinians were killed in what Israeli forces term arrest operations in the West Bank.

Of these, at least 35 were civilians, whom the military admits were mere bystanders to the operation.

B'Tselem accuses the Israeli army of "demonstrating a pattern of indifference to the safety of Palestinian civilians".

Such words though do not comfort Palestinians.

The death of Mrs Zalat is for them just another illustration of how deadly Israel's occupation of their land often is.

It shows - they say - how they are the victims of this conflict.

Mr Zalat told me one of the soldiers had apologised to him. "What good it that?" he asked. "My wife has been killed."

Then, Mrs Zalat's body was carried on a stretcher to the cemetery.

A few hundred mourners picked their way among the gravestones in the spring sunshine.

And there they stood, as speeches were made, and as the body was lowered into the ground.

Mr Zalat crouched by the grave, and took one last look at his wife. He stroked his face. It was just 12 hours since she had been killed.

Another death that changes nothing in this conflict, but changes everything in one family.
No comments: 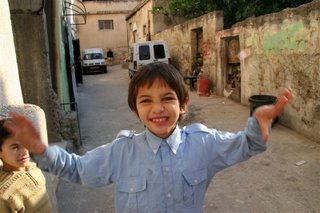