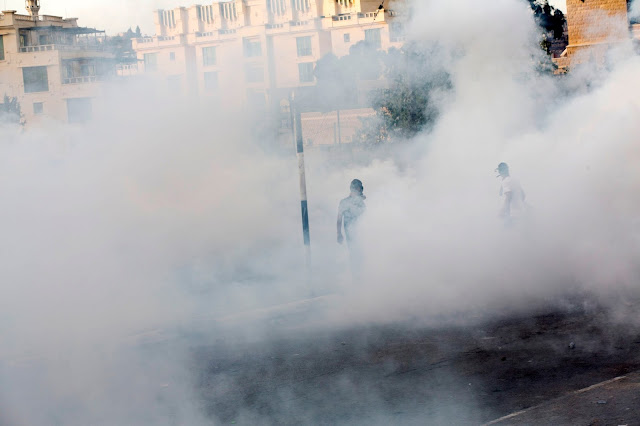 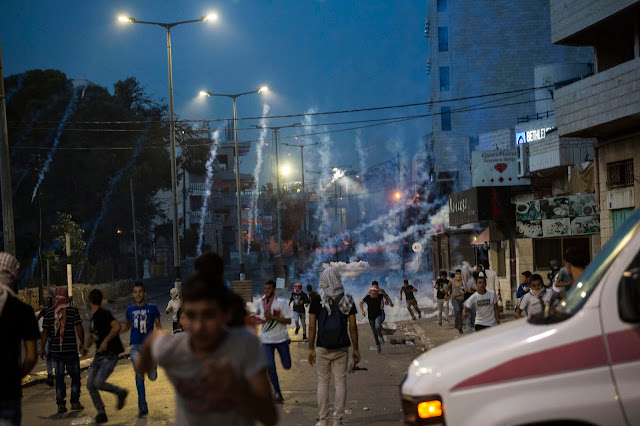 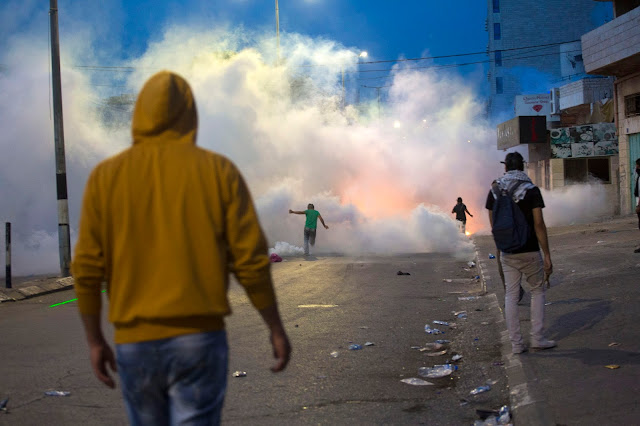 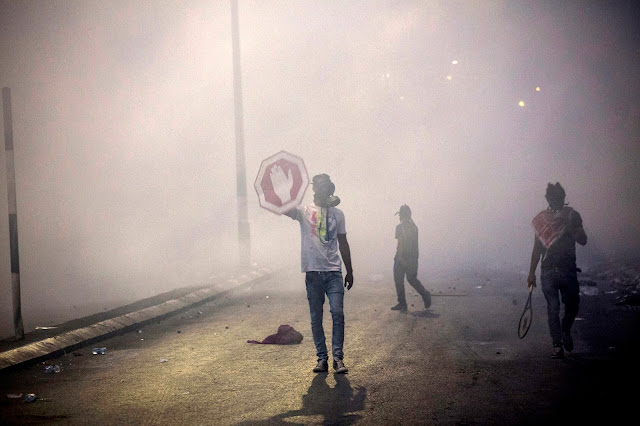 Today, Bethlehem was again covered by tear gas. Everybody says its stronger than usual. It covered al-Azzeh camp and beyond. Very thick. 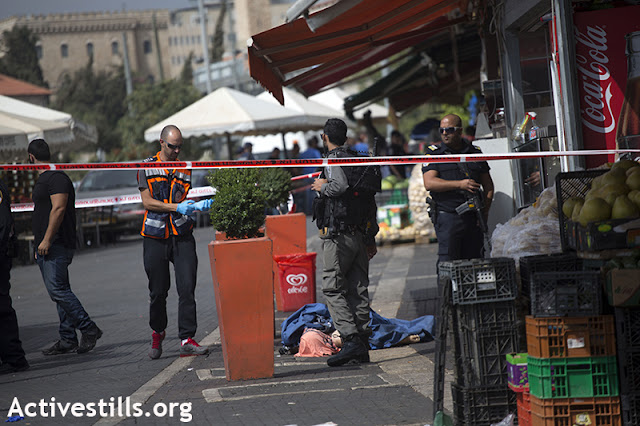 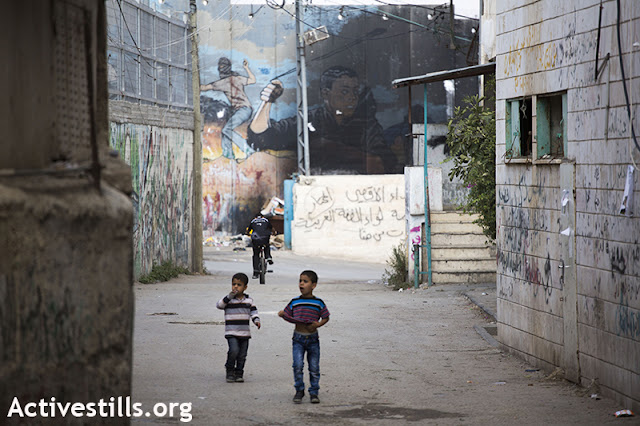 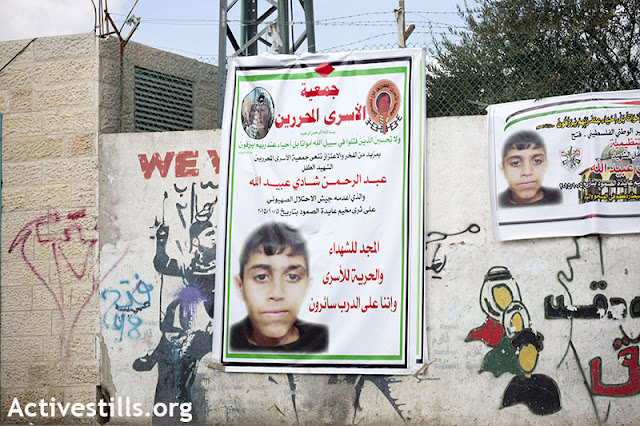 A poster honouring the memory of Abed al-Rahman Shadi Obeidallah, killed on 5.10.2015 in Aida camp 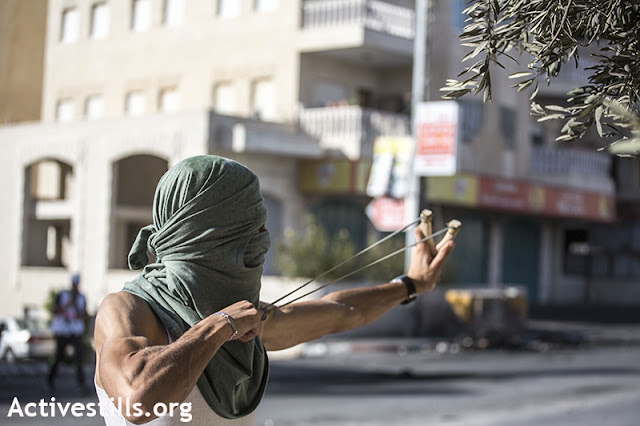 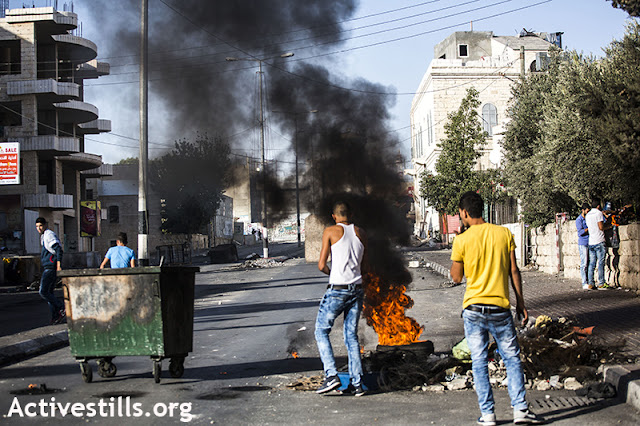 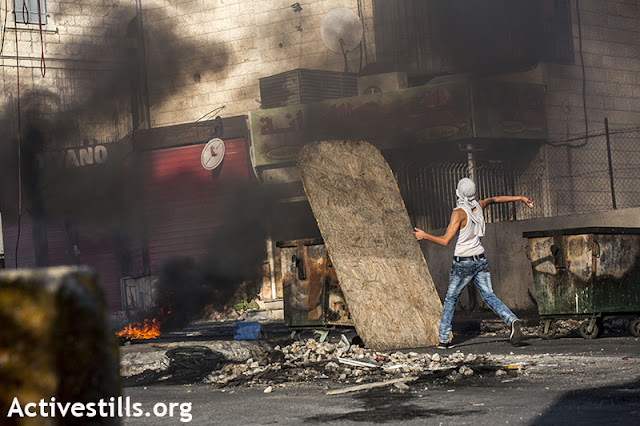 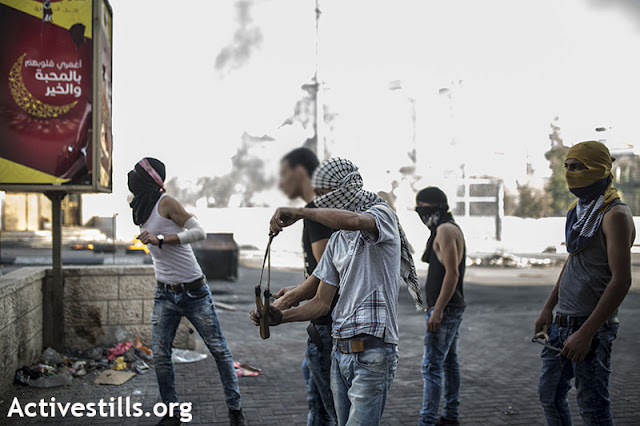 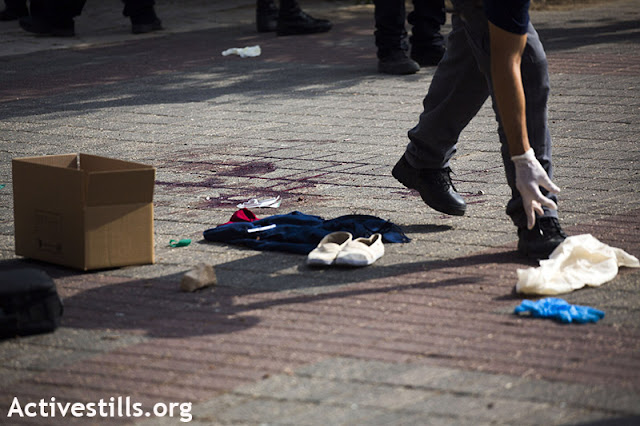 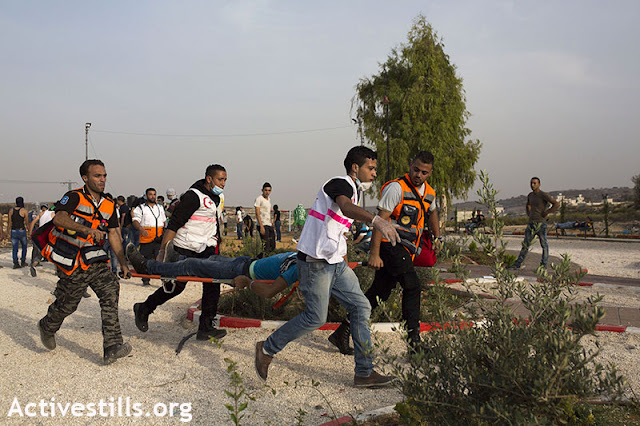 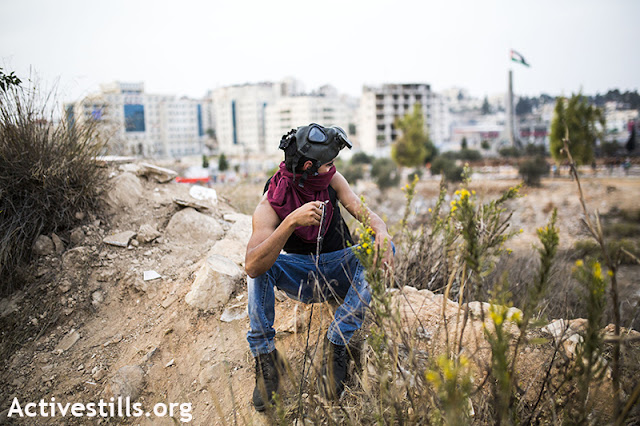 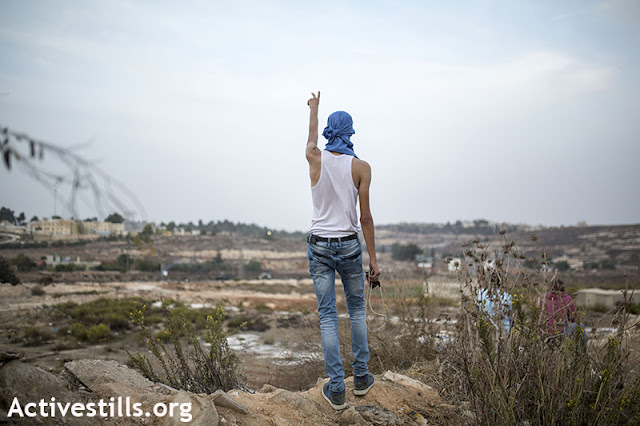 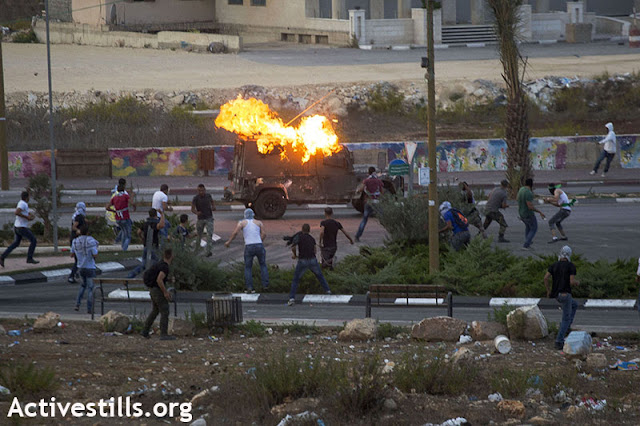 Last night it was difficult to sleep. Over and over in my head was playing the horrible images of the young Palestinian- a Palestinian child later identified as Ahmed Saleh Manasra, 13 years of age,  lying in a pool of blood, agonizing while being insulted by Israeli onlookers. The one who was filming cursed him: “Die, you son of a whore!”, “Die, you son of the biggest whore!”, and telling the police to “Do him a favor, and shoot him in the head!”

Ahmed was in such in pain, and left alone despite his critical condition while an Israeli officer is seen kicking him two times. No ambulance came quickly to take him. Apparently he was chased by an Israeli police vehicle with his car and rammed. The view of this child, leaving there in his pool of blood under a cheering crowd is both excruciating and terrifying.
Read the report of PCHR here

Whatever the boy did, the Israeli police claimed he and his 15year-old cousin Hassan, who was shot dead, stabbed an Israeli child riding a bicycle and injured another Israeli, it is unbelievable that such a treatment of a Palestinian child could happen without an international outrage. Hassan was shot dead on the spot.
The horrendous video went viral on internet but did not make it to the mainstream media - its graphic but they could have chosen to blur the child but still show how the Palestinian child was left bleeding and have the hate soundtrack that is spreading in Israel, and has reached unprecedented and terrifying level. There is a climate of lynch mob mentality and hate in Israel, and now everyone is encouraged to carry a gun. Extra-judiciary executions have become the norm. ‘Death to the arabs’ is being chanted through the nights by mobs in Jerusalem. But this is not apparently interesting enough for the media. Who dares today to talk about the radicalization of the Israeli society?

I arrived just a few days ago amidst high tensions. As soon as I reached Jerusalem on Saturday, I came across the site of an alleged stabbing attack, one Palestinian- Ishaq Badran, 16, from Kafr Aqab, was shot and killed by the Israeli police after carrying out an alleged stabbing attack in the area. I still had my suitcase with me and left it to some Palestinians to take photos. The Israeli police members were nervous and shouting. I was thinking to put a nice photo of a falafel plate to say that I am back, instead; here is a photo of a dead Palestinian teenager.

I continued my way to Aida camp. The family I am staying with is still traumatized by the killing of 13-year-old Abed al-Rahman Shadi Obeidallah.

He was shot near the heart by Israeli forces during clashes in the refugee camp, still wearing his school uniform. The boy of the family I am staying with was his classmate. 'We cried a lot', told me his mother. 'The children do not have the mind to study', she adds. No wonder. The eldest one of the family, 16 year old, is sad and does not manage to sleep because of the situation. She used to smile a lot, now the smile is gone.

There is pain, and anger all around. Decades of the military occupation and colonization have affected all the Palestinians, making their lives miserable. What to hope for when all the negociations have led to nothing but to be deprived of more rights and lands? What do you expect Palestinians to do? Sit and wait forever while watching their lands being confiscated and their loved ones being slaughtered and arrested, and humiliated?

Reminder: the root cause is the occupation and colonization.

These are the root cause of the violence.

The mainstream media joined the chorus presenting the situation as a ‘cycle of violence’, a new wave of terror with the subtitles that the violence carried out by the Palestinians - the occupied and colonized- is equal to the one used by the decades-long occupying and colonial power-Israel. This is not equal, you need to put into the equation the brutal repression carried out by the Israeli state against the Palestinians since its inception. Also the media are quick to present the Israeli official version of the attacks, as the truth while in some of the cases it appeared that it was very doubtful that the Palestinians carried out a weapon- and even so in many cases, they could have been neutralized without killing them. Look at the video of the young woman shot multiple times when posing no treat  in Afula (apologize for previous version of the article that said that she was killed, she was injured). They said she was carrying out a knife, but then on one video that was released it seems that she was holding her glasses. Glasses are being seen near her, and then we see someone kicking them away. Even if you doubt this last video with the glasses and that she was indeed holding a knife she could have been easily arrested without shooting her.
You can see the clips here:
http://www.jonathan-cook.net/blog/2015-10-09/video-israelis-shoot-motionless-arab-woman/

The tension is very palpable. I asked a taxi driver if he wanted a Intifada. He strongly answered- 'Yes. Yes we are fed up! Enough is enough!
I asked him also about the Palestinian Authority. He answered: 'Also enough! They only help the Israelis!'

I went to Jerusalem again, and also again I was soon finding myself in a taxi following the Israeli police cars. Something had happened. It was another attack. A Palestinian teenager later identified as 17 year-old Marah al-Bakri was shot and wounded. It was alleged also that she attacked an Israeli . A schoolmate interviewed by Shehab News Agency explained that she was surrounded by different police members and heard at least 10 shots. The Israeli forces that claim to be among the best could not arrest a 17 year old without shooting her multiple times?
The report by PCHR indicates a very different version than the police here.

Why so many shootings now? It’s because there was a licence to kill order by the Israeli government as Netanyahu pushed and obtained new open-fire regulations, that allow basically the Israeli police to shoot whenever there is a suspicious of an attack.  In other words- whenever they feel like it.

The figures are striking. Since October 1, 27 Palestinians were killed, 10 of them children, while 7 Israelis were killed in the same period. More than 1,300 Palestinians have been wounded, many with live ammunitions.

Yesterday I was covering the clashes happening near Bet El military compound, near Ramallah. Around 200 Palestinians, mainly youths, were there, maybe 50 were active in throwing rocks, at Israeli soldiers who were aiming and shootings. There was no serious injury this time but it could happen, any minute to any of the person present. A few days ago, a researcher for human rights watch, was shot and injured at the same spot, despite being clearly marked ‘Press’.

At one point, two Israeli military jeeps decided to go further and go around the shebabs (young Palestinians), for reasons that are unclear. Some Palestinians ran after it and threw a cocktail molotov at the jeep, setting the top of the it on fire, prompting the Israeli soldiers to quickly retreat. This was followed by cheering roar of the crowd. A sense of pride was palpable.

The decades-long humiliation of Palestinians by their occupiers is very well understood and felt by these youths. This generation of youth, that is less dependent on the usual party lines and on the Palestinian authority, does not want to take it any longer, and why should they? What do they have  to lose, when their  future that the Israelis and the international community plan for them is not theirs? The path of the revolt, even difficult, will  be their own.

As I am writing this I can hear a lot of sirens and the sounds of the tear gas canisters being launched by the Israeli soldiers. Probably more Palestinian youth are being injured at the clashes in front of the Wall.


UPDATE: As I was trying to upload the post, I was told that there was a Palestinian who has been killed at the protest in Bethlehem, I just come back from the hospital to witness a very familiar scene. Palestinians passing in front of a body for a last goodbye. He was 27 from Deheishe camp. His name was Mutaz Ibrahim Zawahreh.

(I will try to update, also on tweeter and instagram @annepaq, and for one of the best visual sources check also the website of Activestills, we have tweeter and FB too) 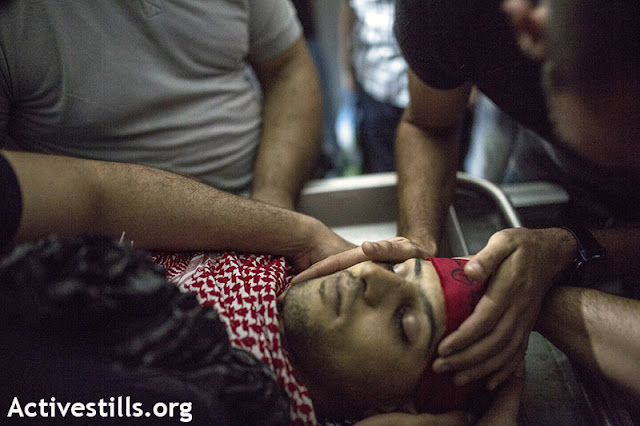