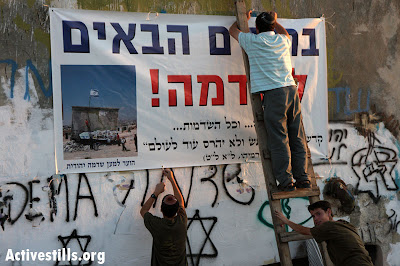 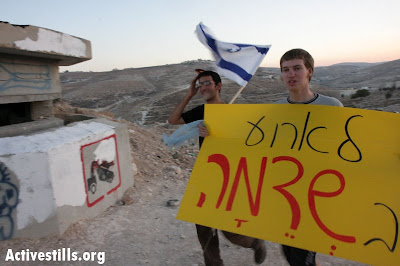 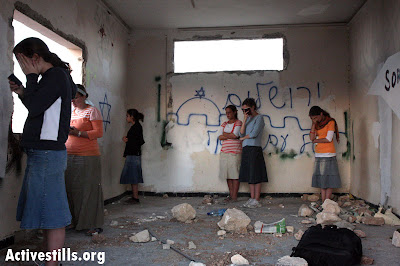 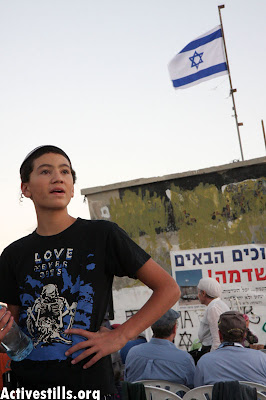 Settlers assault worshipers [Ma'anImages]
Bethlehem – Ma'an – More than 200 Israeli settlers occupied an abandoned Israeli military base in the West Bank town of Beit Sahour on Wednesday night, assaulting an ecumenical peace group that had gathered nearby.

Two dozen international and Palestinian worshipers were attending a non-denominational, but strongly Christian-toned, religious service when the settlers arrived.

The organizers of the worship service said beforehand that they did not plan for a confrontation with the settlers, and would move if the Israeli military asked them.

As the settlers filed into the abandoned base, two dozen armed soldiers, border police, and civilian police looked on. The settlers set out rows of plastic chairs, a public address system, and lights, powered by a generator.

The settlers delivered a series of speeches in Hebrew, then a Jewish prayer service. As the event wore on for over two hours, the settlers lost their cool at the peace demonstrators, eventually attacking them. Israeli border police finally intervened. A few of the worshipers were mildly injured.

In organizing the peace service, Nathan Dannison, from Michigan in the United States, said, "For me, a lot of the impulse came out of being labeled an international anarchist, when in fact I'm a Christian Democrat."

He was referring to the label settler groups have applied to the small band of American and European supporters who have been aiding the Palestinian response to the settlers' repeated occupation of the site.

Deena Sattler, a mother of seven who moved to Israel from New York 38 years ago and currently resides in the Har Homa settlement, said, "These guys are anarchists." Sattler said she believes that the "anarchists" are seeking to drive Jews not just out of the occupied Palestinian territories, but out of Israel itself.

Almost every week since May, steadily larger groups of settlers, mainly from the nearby settlements Har Homa, Gush Etzion, and Tekoa, have come to the old base to assert their claim that the area should stay "out of Palestinian hands."

Asked about their plans for the site, the settlers said they want to prevent Palestinian construction on the land. The area, which was evacuated by the Israeli army in 2006, is currently designated for a multimillion dollar children's hospital. Several settlers said they were concerned that even a hospital could somehow be used for "terrorism."

Sunny Hallanan, an Episcopal priest from Pennsylvania, led the peaceful service along with Dannison, in prayer and signing songs such as "We shall overcome."