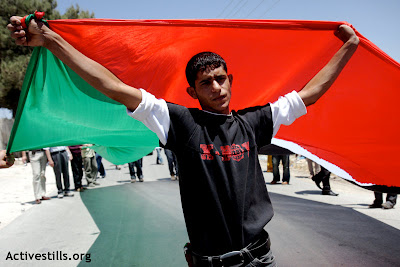 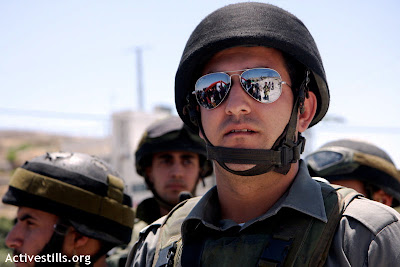 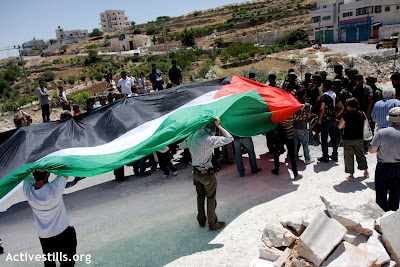 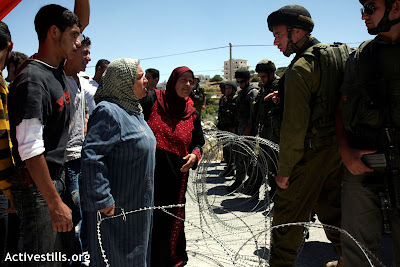 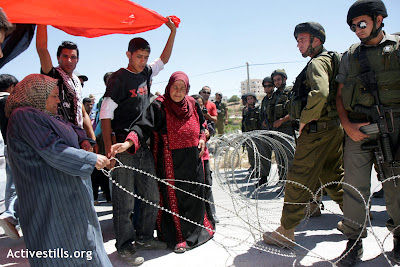 One week after protester's death, crowds march in al-Ma'sara


Dozens of Palestinians, joined by Israeli and international sympathizers, marched at al-Ma'sara today, protesting against the Apartheid Wall being built by Israel and the continued expansion of settlements.

Carrying a large Palestinan flag, the prostesters marched right up to the razor wire which the Israeli Occupying Forces used to block the exit road from the village. About 25 armed soldiers faced the protesters, who stood just a metre across from them.

Many of the speakers mourned the death of Aqel Sroor, who was killed last Friday by the Israeli Occupation forces in the West Bank village of Ni'lin during a demonstration against the Wall.

"He was defending his rights as a human being," said Awad Abu-Swai in a speech to the gathering. "His defence was consistent with the law, unlike the occupation." Abu-Swai hoped that a lawsuit would prove a peaceful way of returning the land to the Palestinians.

"Injustice, power and oppression will come to an end, but love, peace and humanity will last forever", he said to applause.

An Israeli activist addressed the soldiers directly in Hebrew. "Does this village look rich?" he asked. "These people need this land, these trees. Is it moral to take people's land?"

A village woman, Fatema Muhammed's mother, followed him with a message of defiance. "We come in peace, we want to live in peace," she shouted at the soldiers across the wire. "We come empty-handed in front of armed men but we have no fear, because justice is on our side."

Ms. Fatema then led the crowd in a chant of "Yes we can!" invoking the hope that U.S. president Obama can persuade Israel to stop the settlement expansions.

Following the speeches, some protesters tried to open the wires and pass through. One woman, a grandmother of three, almost made it past, cutting her hands on the wire in the process. She pointed up the hill to the ruins of her house, destroyed four years ago by Occupying Forces. "This is my land, my place, my country," she said.

The demonstration dispersed peacefully, but with words of warning. "This wall will not give you safety," one speaker said to the soldiers. "Look at every occupation in history. What did the people do?"

Additional information:
The trial of the four Palestinians of the Al-Ma'sara Popular Committee against the Wall and the settlements (all four arrested during a non-violent demonstration on 01.05.2009) has been posponned to July. In the meantime, they cannot participate to the demonstrations. To remain free, they had to pay a very expensive bell (all together more than 50,000 NIS).