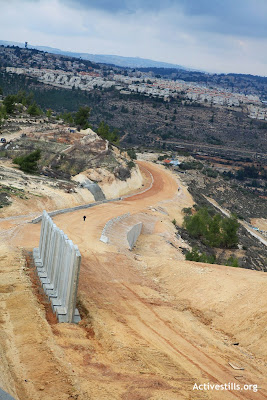 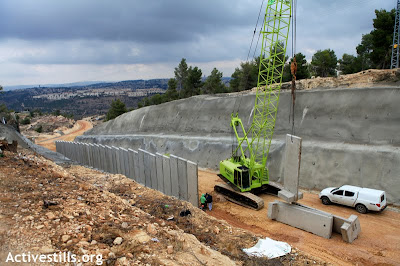 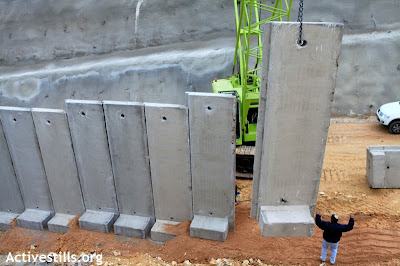 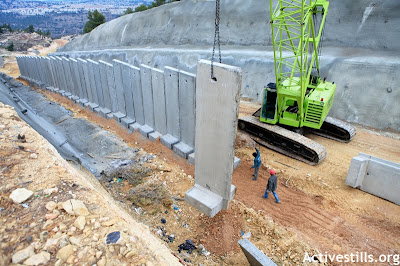 Sorry for the delay in putting new pictures...but I needed a small holiday break with my family.
No Miracle happened during my trip...I came back and I found that the Wall is not only still standing but also growing. That was a first disappointment. I went to Al Walaja to monitor the building of the Wall, I was shocked to discover a whole new section. It takes only a small team to actually put it, and there were only two private security guards who did not even bother shouting at us not to take pictures. I heard later on that the building has also started on the West part of the village (which provoked protests from villagers and arrests- see below article by Amira Hass). Happy new year? I believe not for the Palestinians, and especially the inhabitants from Al Walaja.

Residents of Jerusalem-area village fight battle against separation fence
The Indians of Walajeh fear being cut-off from their neighbors.
By Amira Hass

Exhausted from the prolonged struggle, the Indians of the village of Walajeh know their fate has been decided and they will be encircled by the winding separation wall. They will be cut off from their eastern neighbor, Beit Jala. They will be a tiny enclave next to the other choking enclave, that of Bethlehem, which is surrounded by thriving Jewish settlements (those of Gush Etzion, Har Gilo, and so forth ), the inseparable part of the State of Israel.

By chance, of course, the wall will also cut them off from 2,400 of the remaining 4,000 dunams (some 1,000 acres ) of land that the village still owns. Before 1948, Walajeh had some 18,000 dunams. The original village turned into two moshavim, Aminadav and Ora, and the residents turned into refugees. A large part of the land that had remained east of the Green Line was expropriated after 1967 for the benefit of Jews living in the settlements of Gilo and Har Gilo. The Civil Administration and Jerusalem municipality (to which half the village's lands were annexed ) failed to prepare a master plan for the village, but excelled at demolishing 45 of its houses on the pretext that they were illegal. Now the white man is also trying to get the rest of the poor village's lamb.

On the other hand, the Indians of Walajeh have been fighting a rearguard battle against the route of the wall. One such battle took place on December 22: The exterminators of nature, landscape and livelihood in the form of giant bulldozers accompanied by a contractor, workers and a Border Police unit raided the hillside to the west of the village, apparently at dawn. When the bulldozers were within sight and sound of the village, the villagers appeared on the scene and found some two kilometers of land freshly scarred by a path that had been breached between the oak and olive trees and the rocks. Dozens of trees were marked with blue and orange ribbons to indicate their clear fate - uprooting.
Walajeh Amira Hass

Shireen al-A'araj walking along the path that cuts near Walajeh.
Photo by: Amira Hass

The owners of the land hastened to call Shireen al-A'araj, a member of the village council. She demanded that the contractor show them the order on the basis of which the work was being carried out on the residents' private property. He did not have one. The villagers demanded that a halt be put to the work lest it transpire it was illegal.

About two hours later, a representative of the Civil Administration appeared on the scene and told A'araj that the matter had already been discussed in the High Court of Justice, and it was legal and sanctioned. Well versed with previous land expropriations, A'araj demanded to see the order for appropriating land for security purposes. She says the official replied it was not his duty and then ordered the Border Policemen to arrest anyone who interfered with the work.

The residents sat down in front of the bulldozers and the Border Policemen dragged them away. A'araj was sprayed with pepper gas and could not see. One of the policewomen told her she should sit down, "over here," and she found herself on a thorny bush. "Just how evil can they be?" she thought to herself as she heard them gloating.

Around 3:00 that afternoon, eight Palestinians were arrested on the order of the Civil Administration's apparatchik - six men, a youth and A'araj. (A Border Police spokesman told Haaretz that the Border Policemen "get their instructions from the sovereign authority at the site." ) The eight were detained at the Bethlehem checkpoint for several hours. Then they were taken to a lock-up within the industrial zone at Atarot. A'araj was the only one who remained handcuffed for several hours. The eight were released the following morning.

In response to Haaretz's questions, security sources said that work was being carried out at the site "for preparing the route of the security fence on the basis of an order that was legally issued a while ago, and about which the residents were informed on several occasions. The day before, a tour was held by the civil administration official and the owners of the land."

The arrests were carried out, the security sources said, "after there was a violent disturbance at the site during which the Palestinians threw stones at the workers. After attempts to hold a dialogue failed, and the demonstrators refused to listen to the force's instructions and even continued their violent actions, a number of demonstrators were arrested on the order of the force's commander."

But if everything is legal and in order, how is it that Supreme Court Justice Asher Dan Grunis nevertheless ordered the military authorities, on December 28, to refrain from any further activity at the site until another ruling, "including the chopping down and uprooting of olive trees, digging, groundwork and paving roads"?

Attorney Ghiath Nassir, who represents the village, submitted an urgent petition to the High Court on December 23. Representatives of the Defense Ministry and the Israel Defense Forces were told to respond. When they failed to do so by December 28, Grunis announced his ruling.

Nassir explained to Haaretz why he considered the work to be illegal and not according to the rules set by the authorities themselves. He said it was possible to petition against land confiscation only once valid orders are issued, and not merely on the basis of the route published by the Defense Ministry. The original order had expired at the end of 2007, he said, and it was indeed renewed but was not shown to the residents so they could appeal. The route affects the village's cemetery, a well and rich agricultural land.

The High Court is also considering another petition from the villagers relating to a northern section of the fence in an area that was annexed to Jerusalem. There, too, the work was stopped at the behest of the High Court.

The villagers and their representatives hope that someone will still come to his senses and understand that the harm to them and their lands is disproportionate. They are hoping that the proposal by Col. (Res. ) Yuval Dvir of the Council for Peace and Security that the route be moved close to the Green Line will be accepted. Perhaps the Defense Ministry also believes that some people out there might come to their senses, and precisely because of this sent the bulldozers in the small hours of the morning?

Email ThisBlogThis!Share to TwitterShare to FacebookShare to Pinterest
Labels: "al-walaja", "building of the wall"