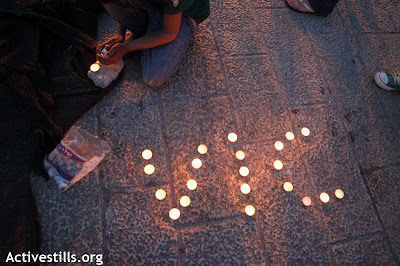 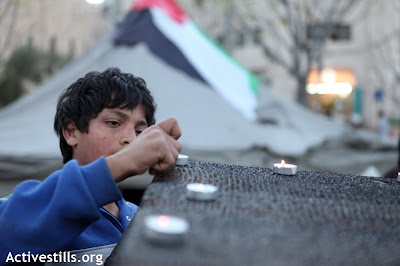 We are here tonight to pay tribute to Victorio Arrigoni, an Italian solidarity activist and journalist who was brutally murdered last night in Gaza supposedly by a salafist group. We are also here to condemn this murder and raise our voice against this kind of horrific acts. Victorio had been working for the Palestinian cause for years and was arrested several times for the Israelis. He had been in Gaza for the last two and half years as part of the ISM. Besides his direct action soldiarity activities in Gaza such as accompanying farmers in the buffer zone, or the fishermen in the sea, his writings were also widely published and popular.

Tonight I stand here as an international activist who feels deeply sad and shocked by the death of a brother in the struggle. As an activist, we know the danger that we face here but it never occurred to me that we could be the victims of Palestinians. It is still hard to believe and very painful to think that Vic was killed by Palestinian hands and I have still difficulties to deal with it. Lets hope that the full truth comes out soon and that the responsible will be brought to justice.

I also stand here as a person who went to Gaza and met Victorio several times. Vic was an incredible character that nobody could forget. He was very big in ever sense of the term- he had a big body, he used big words, he had big tatoos...but above all, he had a big heart. Despite everything that he saw, especially during Operation Cast lead, and the inherent difficulties of being an activist in Gaza, he had a very strong sense of humor, a very communicative appetite for life and a deep love for Gaza and his people. He was a dedicated activist and a skilled writer. As one of the only foreigner in Gaza during Operation Cast lead, he had a very important role in bringing out the truth.

He was also doing some very important grassroot work.

While I was visiting Jaber, a Palestinian farmer who lives 300 meters from the Green Line near the buffer zone, he told me how his farm and lands had been destroyed by the Israeli army and how he had to move his family away from the zone because it was so dangerous. But Jaber continued to sleep there, afraid that the Israeli army would also destroy his small home. Jaber told me how Vic stood with him, and had slept inside the home for months so he can stay there. In the demonstration in Beit hanoun to where I went, he was always at the frontline and he hardly moved when bullets where shot nearby. He would stand up by his Palestinian friends no matter what and Gaza was his home.

Vic was this kind of activist, not showing off but doing things in a genuine way, and standing up always for justice.

His writing were strong and talked the truth. He was writing under the slogan “stay humane”. Staying humane is not becoming numb to the bad news and just trying to continue to get by. Staying humane is to be moved and touched by injustice, and to be able to react to such a tragic news.

His death resonates as an alarm call that the siege in Gaza, and the occupation in general, is unbearable and produces monsters.

They should be no flowers for Vic. I do not think he would have liked that. I think he would much prefer to have people raise their fists in the sky and shout: FREE GAZA!!!!!

We, international activists, we will not be deterred by such crime which does not represent the Palestinian people but is the result of 60 years of oppression and blind eyes from the international community.