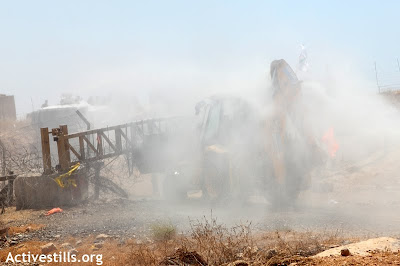 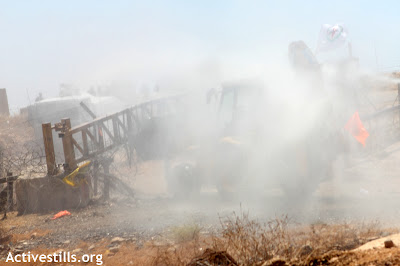 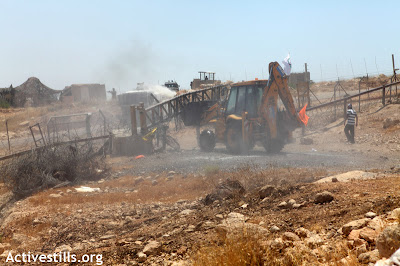 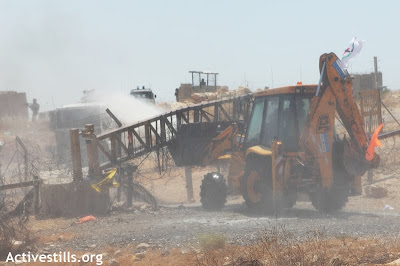 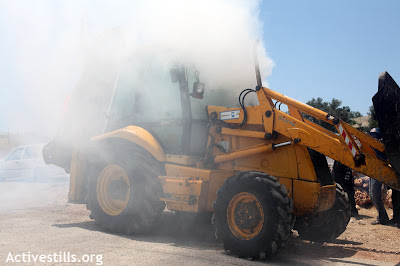 Ghassan Bannoura/PNN Exclusive – Seven people were injured on Friday as Bil’in villagers in central West Bank celebrated the removal of the old Israeli wall built on their lands. The six locals and one French activist sustained moderate wounds as they were hit in the arms and legs by gas bombs fired by Israeli soldiers.

Villages all over the West Bank followed Bil’in's steps in conducting weekly protests against the Israeli built wall on their lands. Today protests were reported in Nili’in and Nabi Saleh in central west Bank and al Ma’ssara village in the south. In Nabi Saleh troops injured a nine year old girl and arrested one international activist. In Nil’in many were treated for the effects of tear gas inhalation while in al Ma’ssara soldiers did not allow people to reach the construction site of the wall.

Residents of Bil’in started to organize a weekly nonviolent protest against the Israeli wall six and half years ago. In September 2007 the villagers continued protesting; and the legal proceedings managed to get to the Israeli Supreme Court of Justice, to order a halt to the wall construction. The court ruled for a re-routing of the section of wall built on Bil'in's land. Due to the ruling, the villagers got back 275 of the 600 acres Israel took for the wall and the nearby settlement of Modi’in Illit. In 2004 the International Court of Justice in The Hague ruled the Israeli wall illegal.

In February of last year and after two years of stalling the Israeli army began rerouting the wall by constructing a new one. This week the new wall was finished and army bulldozers started to remove the old one away; a scene that Bil’in villagers are not accustomed to.

“Today we celebrate,” Explained Rateb Abu Rahmah , the media coordinator of the Popular Committee Against the Wall and settlement “it’s a victory for our popular resistance; this was accomplished by hard six years and half of resistance.”

Today like every Friday the protest started after the midday prayers, in addition to Israeli and international supporters who joined the struggle of Bil’in since it started; Palestinian PM Salam Fayyad and Arab MK Mohamed Baraka joined today’s protest.

Every week an Israeli army unit stops the villagers from going through the gate of the wall by firing tear gas canisters, causing dozens to suffer gas inhalation. Today seven were injured as they were hit in the arms and legs by gas bombs fired by troops. The army used live rounds and chemical water known to local as “Skunk” for the bad smell it produces.

“We will continue the struggle, we still live under occupation and we still have land trapped behind the wall and the settlement is built on.” Says Abu Rahmah.

Even with the peaceful nature of the Bil’in protests the army faced it with violence; leading to death. In January 2010 Jawaher Abu Rahmah was killed due to severe tear gas inhalation. Her brother Bassem was killed as well when an Israel soldier shot him in the chest with a tear gas bomb in April of 2009. Locals estimate that 1400 people were injured by the army fire in Bil’in protests since they started and as many as 140 people arrested.

Email ThisBlogThis!Share to TwitterShare to FacebookShare to Pinterest
Labels: Bil'in