When it becomes even criminal to show your own village / Quand montrer son village devient un crime, Al-Walaja, 13.03.2012 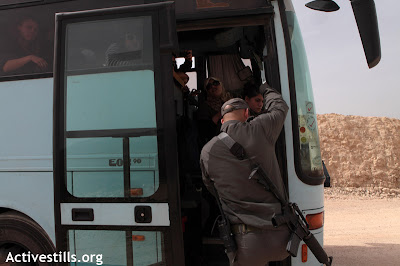 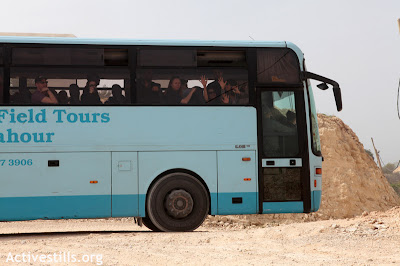 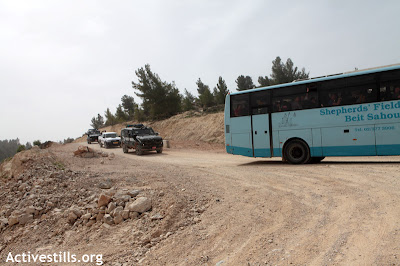 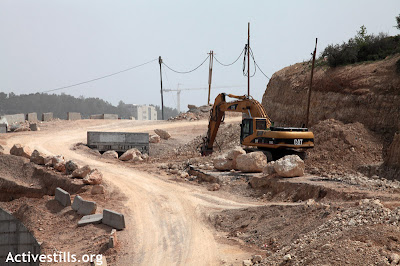 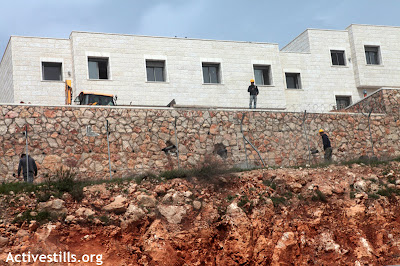 Update: see below article by the Harvard students about the incident

The tour was conducted by Shereen Al Araj, a Palestinian woman activist from Al-Walaja, member of the local council and the popular committee against the Wall. Shereen is a brave activist who has participated and organized countless popular protests and visits to delegations to her village so that to raise awareness on the critical situation of Al-Walaja. Once completed, the Wall will totally surround the village, cutting it from basic services. From its 18,000 original dunums, Al-Walaja will be left with 2,000 dunums.

The Israeli soldiers boarded the bus. Three military jeeps and a police cars were necessary to escort the "dangerous" bus to the checkpoint where the students were detained. As a Palestinian, Shereen got of course a special treatment and was brought to Atarot; a police station close to Bethlehem for further investigation on her very subversive behavior. There was no charge. But she was warned that next time she will have to pay a 5,000 nis.

This is another clear attempt by the Israeli authorities to prevent the truth to come out, another pathetic way to silence any Palestinian voice who dare to show what is happening on the ground to the internationals and speak up. Now it has become criminal to show your own village and explain the situation. Does it not remind you of any dictatorships that so many people easily criticize? Why Israel should be treated differently? If Israel has nothing to hide, why then it prevented a simple visit by students?

I should add, that while those unwelcomed visitors were kicked out of Al-Walaja, the bulldozers were working full time on expanding the nearby settlement of Har Gilo, which is built on the lands of Al-Walaja and Beit Jala. It seems that the other kind of visitors; the ones who are Jewish and grabbing the lands of Palestinians, are more than welcomed by the Israeli authorities. I dream about the day when these settlers will be escorted at gun point to the checkpoints and be told to never come back.


Being detained by foreign police isn’t on a typical spring break agenda. Then again, the West Bank isn’t a typical destination. As members of the fifth annual Palestine Trek—a student-organized trip to the West Bank and Israel—we witnessed injustices perpetuated by Israel’s occupation of Palestine. There, we experienced a police encounter that has been inaccurately represented in the media. Following the incident in which Israeli authorities detained the group, news outlets reported that we were “provocateurs.” Some claimed we were arrested. The Israel-based newspaper Haaretz, published that the road was “for security vehicles only,” calling the alleged offense a “violation in every sense.” For us, the events illustrated adversities Palestinians face daily under occupation.

Tuesday morning, our group of over 50 Harvard students traveled to Al-Walaja in the West Bank to understand the tensions between Israel and Palestine that have been exacerbated by the Wall and unlawful Israeli settlements. Adjacent to the village sits the Jewish settlement Har Gilo, which is illegal under international law as Article 49 of the Fourth Geneva Convention explicitly prohibits an occupying force from moving its citizens onto occupied land. Although the International Court of Justice and every government except Israel acknowledges this, settlements continue to expand into Palestinian land. Their populations grow by 5.7 percent annually, and only a small number have ever been dismantled, due to an international body unwilling to hold Israel responsible for its violations. Citing security concerns, Israel has constructed a wall through Al-Walaja, creating a cleavage within the village, which defies the internationally recognized 1967 borders.

The public road through Al-Walaja where we stopped was unsigned and unmarked. Students stepped off the bus to gain a clearer view of the area as our guide Shireen al-Araj—a local activist—showed large unmanned gaps in the structure, contradicting Israel’s ubiquitous justification that the wall is for “security purposes.”

Minutes after we disembarked, two police vehicles approached us. Four officers carrying assault rifles demanded we return to our vehicle and leave the area. When asked why we were being expelled, an officer responded, “because I said so.” In subsequent statements to the media, they reported that we were on a restricted military road.

However, several non-military cars were present, and in most circumstances, declaring areas as military zones requires official documentation and road signs. Wednesday, the Office of the Quartet Representative, Tony Blair, confirmed via email that the area remains open to the public, noting that they have taken many visitors there without incident, including the day prior.

As we retreated, an officer pushed several students toward the bus. They seized identification from Palestinians traveling with us, and placed Shireen and the bus driver under arrest. We were told we would be taken to a nearby checkpoint to be searched. Two officers boarded the bus as the police vehicles escorted us to the checkpoint. When asked why we were being detained, one responded, “I don’t know,” and later refused to answer. At the checkpoint, Shireen was driven from the premises and later released. No Harvard students were searched or arrested.

As individuals who emerged unscathed, we wish to highlight not what happened to us, but the appalling trend from which this incident stems. Our hour-long encounter with the police was insignificant, yet because we are an international group, the incident was widely publicized. Our detainment is not the important narrative. We were never in danger, but Israel’s misuse of authority means the Palestinians with us could have been jailed indefinitely under martial law. Instead of our story, those of countless Palestinians forbidden from entering their original homes, detained at checkpoints for hours every day, and living in homes with demolition orders should be told.

The police arbitrarily declared the road a military zone. They claimed we participated in illegal activity though they neither cited signs nor provided required documents to justify their assertions. These realities illustrate the oppressive power imbalance that belittles an entire population.

We were appalled by the actions of Israeli authorities and the ensuing media coverage that frames us as protesters attempting to provoke authorities. In a Crimson interview, Assistant Dean of the College Jay Ellison incorrectly stated that we were photographing “areas [we] weren’t supposed to photograph (military installations, etc),” a claim that remains unsubstantiated. In fact, there were no military installations, and the photographer Anne Paq, who initially reported our detainment, was working in the same area without consequence. The media response to the events has undermined the truth and distorted innocent voices of people like Shireen who seek justice. We have become objects of a culture of impunity that has allowed the occupation to occur with little backlash.

We call on fellow students to listen to these untold stories. The oppressive and stagnant status quo must be reformed; this can only be done when the international community holds Israel accountable for its transgressions. The first step to initiate real change is to open our eyes to the realities of the situation, beyond the one-sided version Israel promotes.

Email ThisBlogThis!Share to TwitterShare to FacebookShare to Pinterest
Labels: "al-walaja"