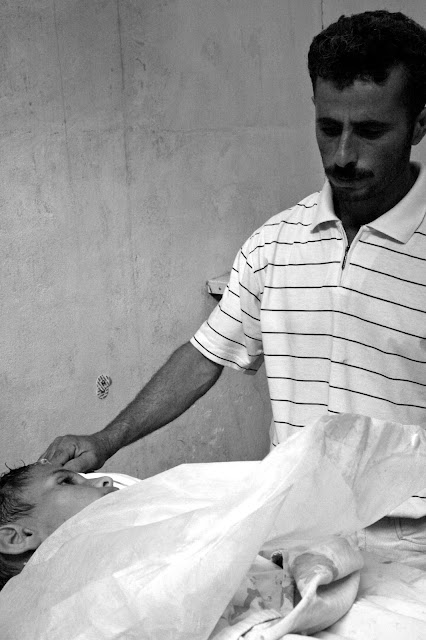 Omri Abu charged of killing Ahmed Moussa, 10, during a demonstration against the separation fence near the West Bank town of Na’alin; Abu: If you don't respond, it's perceived as weakness.

6
haaretz
A Border Police officer was acquitted Tuesday of causing the death of a 10-year-old Palestinian boy on the grounds of reasonable doubt.

In 2008, Border Policeman Omri Abu’s unit was called to the site of a demonstration against the fence being constructed in the West Bank town of Na’alin, after protesters had breached the fence.
The unit was met with a barrage of stones when they arrived. Abu opened the door of his jeep and fired two live bullets, fatally shooting Ahmed Moussa, 10, in the forehead.

Abu was indicted in May 2010 at the Ramle Magistrate’s Court for causing death by negligence. The trial lasted for two years due to the difficulties in bringing witnesses from the Palestinian Authority.
In his testimony, Abu said:  “I opened the door to evaluate the situation and felt immediate danger and alarm. The stones were hurled with such intensity that the vehicle rocked, so I saw fit to shoot in the air.”

Asked what factors he considered when he opened fire, Abu said “there was concern that the incident would escalate. Even in a bulletproof car, you have to respond. If they see you don’t respond, it can be perceived as weakness. They can crowd around us and the incident can escalate to 1,001 other possibilities.”

Abu testified that he felt in danger despite being in a bulletproof vehicle because “these vehicles are only protected to a certain level, and in some cases vehicles have been rendered useless after being damaged in the hood ... Windshields have also been shattered. That’s not something you get used to.”