following the killing of 10-year old girl in Anata 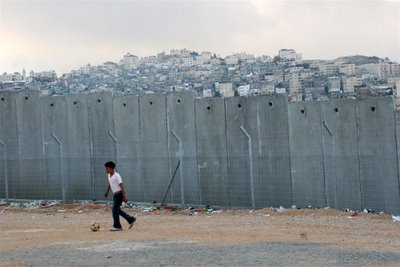 Palestinians attend the funeral of Abir Aramin after she was killed by Israeli soldiers in Anata refugee camp near Jerusalem, 19 January 2007. (MaanImages/Moamar Awad)

Bassam Aramin spent nine years in an Israeli jail for being a member of the Fatah in the Hebron area and trying to throw a grenade at an Israeli army Jeep which was patrolling in Occupied Hebron. On Wednesday morning, an Israeli soldier shot his nine-year-old daughter, Abir, in the head. The soldier will not spend an hour in jail. In Israel, soldiers are not imprisoned for killing Arabs. Never. It does not matter whether the Arabs are young or old, real or potential terrorists, peaceful demonstrators or stone throwers. The army has not conducted an inquiry in Abir Aramin's death. Neither the police nor the courts have questioned anyone. There will be no investigation. As far as the Israeli Defense Forces are concerned, the shooting did not happen. The army's official account of her death is that she was hit by a stone that one of her classmates was throwing "at our forces."

We who live in Israel know that stones thrown by 10-year-olds do not blow brains out. Just as we see every day the Israeli jeeps circling Palestinian children on their way to and from school and greet them with stun-bombs, "rubber" bullets and riot control gas.

A bullet penetrated Abir Aramin's skull, while she was walking to school with her sister. I saw her just afterwards at Hadassah Hospital, where she slept quietly in a huge hospital bed. Abir's face was white. Her huge eyes were closed. By then, she was already brain-dead, and the doctors decided to allow the rest of her to die. I saw clearly that her head had been shot from behind. A young student who witnessed her shooting told journalists that the Israeli border police, part of the IDF, drove up to the girls as they came out of their school examinations: "The girls were afraid and started running away. The border police followed them in the direction in which they were retreating. Abir was afraid and stood against one of the shops at the side of the road. I was standing near her. The border policeman shot through a special hole in the window of his jeep that was standing very close to us. Abir fell to the ground ... I saw that she was bleeding from the head."

Abir Aramin
Abir Aramin is dead. The doctors at Hadassah will not disclose the cause of her death to her parents or her friends. Her family has requested an autopsy. Her father, Bassam Aramin, is one of the founders of Combatants for Peace. My son, who served as an Israeli soldier in the occupied territories, is also a member. They are friends. Bassam told us that he cannot rest until his daughter's killer convinces him that nine-year-old Abir threatened his life or the lives of the other soldiers in his jeep. I fear he will never have the chance to rest.

Abir Aramin has joined in the underground kingdom of dead children the thousands of other children killed in this country and the territories it occupies. She will be welcomed by my own little girl, Smadar. Smadar was killed in 1997 by a suicide bomber. If her killer had survived, I know he would have been sent to prison for his crime and his house would have been demolished on the rest of his family.

In the meantime, I sit with her mother Salwa and try to say, "We are all victims of occupation." As I say it, I know that her hell is more terrible than mine. My daughter's murderer had the decency to kill himself when he murdered Smadar. The soldier who killed Abir is probably drinking beer, playing backgammon with his mates and going to discotheques at night. Abir is in a grave.

Abir's father was a warrior who fought the occupation -- officially a "terrorist," although it is a strange logic that terms those who resist the occupation and dispossession of their people as terrorists. Bassam Aramin is still a fighter -- but as a peace activist. He knows, as I know, that his little dead girl takes all the reasons for this war to her grave. Her small bones could not bear the burden of life, death, vengeance and oppression that every Arab child here grows up with.

Bassam, as a Muslim, believes he must pass a test -- as a man of honour not to seek revenge, not to give up, not to neglect the struggle for dignity and peace on his own land. When he asked me where we find strength to go on, I said the only thing I could think of: from the children who are left to us. His other children, my three living sons. From the other Palestinian and Israeli children who have a right to live without their elders forcing them into being occupiers or occupied. The so-called enlightened, western world does not get what is happening here. The whole enlightened world stands aside and does nothing to save little girls from murderous soldiers. The enlightened world blames Islam, as it once blamed Arab nationalism, for all the atrocities the non-Islamic world is inflicting upon Muslims. The enlightened west fears little girls with scarves on their heads. It is terrified of boys in keffiyehs. And in Israel, children are educated to fear, most of all, the fruits of the Muslim womb. Therefore, when they become solldiers, they see nothing wrong in killing Palestinian children "before they grow." But Basam and Salwa and all of us -- Jewish and Arab victims of the Israeli occupation -- want to live together just as we die together. We see our children sacrificed on the altar of an occupation that has no basis in law or justice. And, outside, the enlightened world justifies it all and sends more money to the occupiers.

If the world does not come to its senses, there will be nothing more to say or write or listen to in this land except for the silent cry of mourning and the muted voices of dead children.