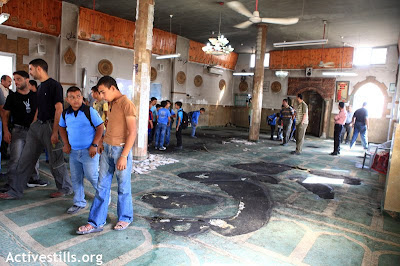 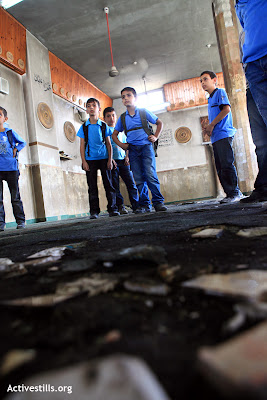 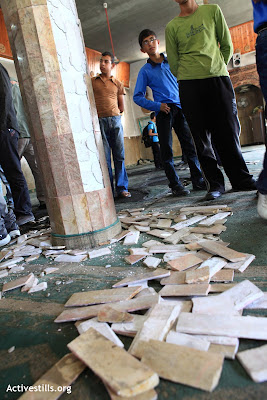 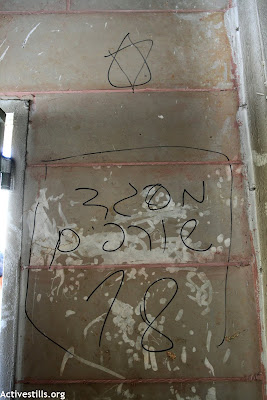 A group of settlers attacked the mosque of the West Bank village of Beit Fajar, on Sunday night, 04.10.2010. The group of Israeli settlers broke into the mosque and sat it on fire , damaging prayer rugs and a large number of copies of the Quran, as well as spraying anti-Arab graffiti on the walls. Burns could be seen until the ceiling. Some pillars have been also damaged. When the inhabitants nearby realized what was happening they clashed with the settlers and the Israeli army finally intervened.
(PNN article below)

Settlers Burn Mosque in Village West of Bethlehem
04.10.10 - 14:26
Bethlehem - PNN - Extremist settlers who burned the Mosque of the Prophets in the village of Beit Fajar, west of Bethlehem, were met with wide popular and official condemnation. ImageThe occupation authorities imposed an Israeli blockade on the town of Beit Fajar, The Israeli soldiers put up checkpoints at the entrance of the town and tried to prevent Palestinian officials and journalists from entering the village. According to Palestinian security officials, representatives of the civil administration and liaison officers of the Palestinian military made an agreement with the Israeli forces to open the site in order to investigate the incident.

There was a gathering of hundreds of angry citizens in front of the mosque, chanting slogans against the heinous crime that targeted the mosque. They were stressing that the crimes would increase against their holy places.

Mahmoud Taqataqa, a witness, said that he awoke in the early morning, approximately 2:45 am, when he heard the settlers taking off the door of the mosque. He approached them asking the settlers to leave the area, but they forced him away at gunpoint at which time he went to other houses to awaken the other citizens of Beit Fajar.

For his part, Sheikh Mohammad Hussein, said that “there is nobody on the face of the universe who can justify this cowardly act, stressing the lake of words to describe this heinous crime on this house of God, stressing that is comes as part of the fierce attacks on the Palestinian territories.”


Hussein stressed that the focus of the attacks on religious monuments is contrary to religious laws and international norms, which prohibits attacks on holy sites and symbols of religion. He goes on to explain that this act shows the reality of this right wing israeli extremist government. The government cooperated with the setters goals and projects, they came to the site under the protection of the Israeli occupation.

The Sheikh Mohammed Hussein sent a letter to Arab leaders, in particularly to the Arab Monitoring Committee asking to take a strong position in support of the Palestinian people and their national authority and leadership, represented by the PLO. Calling on them not to leave the Palestinians alone in front of the arrogance of the occupation. Stressing that Palestinian land is sacred land and is therefore is entrusted to the care of Arabs and Muslims wherever they are found.

The deputy governor of Bethlehem, Mohammed Taha Abu Ali, a member of the Revolutionary Council for the Fatah movement, has pointed out that this Israeli crime reflects the true face of the Israeli occupation, and confirming that the Palestinian leadership continues to follow the settlers attack on the ground under the occupation forces.

ImageAbu Alia, denounced these attacks and said that this can not be tolerated especially that the eyewitnesses confirmed that it happened under the watch of the Israeli army. He also stressed that it is the highest priority of the Palestinian National Authority to continue its support for the citizens of Palestine. and that such attacks can not terrorize the Palestinian people, but will only increase the legitimate national rights. He is calling on the people of Beit Fajar to unit and reconstruct the mosque, which the settler tried to burn. This reconstruction will send a message to the settlers and their protectors that the Palestinian people will remain not matter what state the occupation is in.

Email ThisBlogThis!Share to TwitterShare to FacebookShare to Pinterest
Labels: settlers