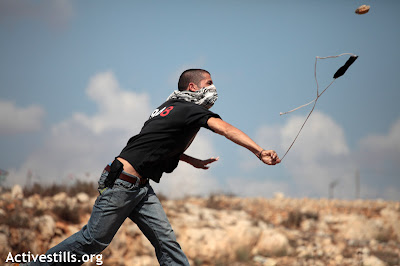 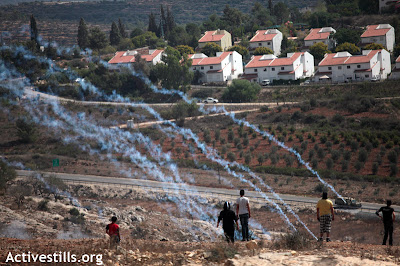 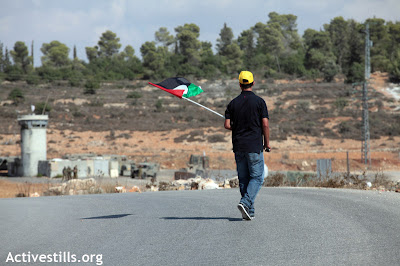 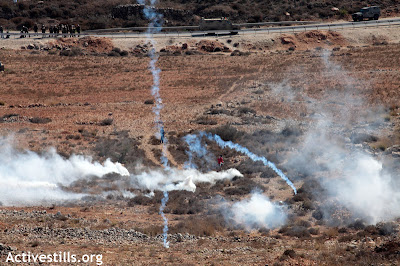 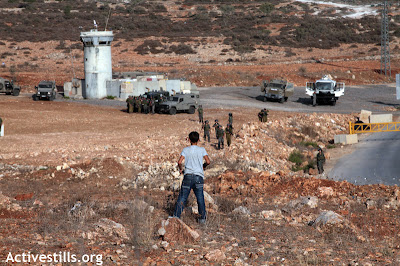 Creating a flashpoint
Testimony from a soldier in the reserves sent to disperse a demonstration in the West Bank before it even started.


Like every Friday in the past 20 months, this week too there will be a demonstration in the village of Nabi Saleh against the takeover of the spring of the neighboring villages by settlers and the Civil Administration's archaeology department.

"A large part of our training for the reserve duty was devoted to these demonstrations and the need to repress them," says R., a soldier who served in the area over the summer in a reserve unit of the Alexandroni Brigade. "We were led to understand that the aim was to stop the popular uprising so that it would not become something big and problematic. The commanders spoke a lot about the fact that this was a new wave of demonstrations, a new type, and that we were now learning how to deal with them, what to do."


The demonstrators in the field also came to the conclusion that the army was undergoing a learning process. In the six weeks since Ramadan, the Israel Defense Forces have stopped their custom of the previous year - of placing roadblocks at the entrance to the village so as to make it more difficult for people from other villages, foreign solidarity activists and anti-occupation Israeli activists to get there. But R., who also testified before Breaking The Silence, a group that documents the army's conduct and policies in the occupied territory through soldiers' testimonies, did his reserve duty in July, when the roadblocks were still in place.

One of the regular demonstrators at the village told Haaretz that, indeed, in July "there was an increase in the soldiers' aggressiveness." But even in previous months, she said, the tactic was to repress the demonstration inside the village, way before it reached the spring.

The B'Tselem human rights organization has issued a special report called "Show of Force: New report on the military's conduct in Nabi Saleh." It claims that the IDF does not recognize the Palestinians' right to demonstrate and that generally stone throwing begins after the soldiers use force and physical violence to disperse a demonstration.

In his response to the report, the army spokesman wrote, among other things: "The practice of preventing public disturbances [i.e. demonstrations] in advance by declaring the area a closed military area was created after, for a prolonged period, all the disturbances that took place on Fridays in the village developed into violent and dangerous disturbances."

The training that preceded the reserve soldiers' arrival in the area, R. said, included simulation games of how to behave during confrontations, and were led by two employees of a private civilian company. The battalion commander, Saar Tsur, "a very moral person," R. felt. "He does not speak aggressively and it is important to him that people's lives be respected, and it doesn't matter whether they are Palestinians or Jews. He spoke a great deal about the need to adhere strictly to the rules of engagement concerning when to open fire - only when there is a life-threatening situation. They also forbade us to use rubber [-coated metal] bullets."

At the same time, he said, "they never discussed with us the background for the demonstrations," the villages' spring that settlers have begun taking over, the complaints to the Israeli police about invasion of private property, which were closed because of "lack of evidence" or "lack of an offender," and about the civil administration, which has declared the area an archaeological site.

Tsur's position was heard clearly by all, R. said, "but our battalion commander sent out a different message. On our first day, he wrote the following command on the wall: 'Battalion X will secure the sector for the good of the Israeli and Palestinian citizens.' The order came from Saar Tsur. And then, to the amusement of those present, the battalion commander wiped out the word Palestinians.

"The worst thing is that, in the end, the soldier arrives on the scene and the situation is not as bad as we were prepared for. They come, fill the flak jacket with rocket launchers and gas grenades, and then in the end find a reality that in no way necessitates their use. The frustration is great, and they start to shoot without any reason. The reserve duty is very boring. There are no confrontations, no explosive devices, no shooting. And then finally on Fridays there is some action and it is possible to go there and get rid of their aggression."

R. adds: "One of the guys even said to me, 'Listen, if we weren't there, nothing would have happened." That is my unequivocal conclusion too. And in addition to that, what right do we have to repress a demonstration where stones have not yet been thrown? People walk with banners and flags and shout into a megaphone in their own village and not even close to the road. What right do you have to stop something like that?"

R. estimates that he and the other soldiers were dispersed to six or seven points in the little village, in addition to the Border Police force that is stationed next to the southern entrance to the village. A number of groups of soldiers climbed onto the roofs of the houses. "We have the means of dispersing demonstrations and are simply waiting for something to happen. And then what I call 'boredom shooting' begins. You are standing on the roof of a house in the blazing heat of July. You have no shade. It's 10:30, then 11:30 and nothing is happening, and you have a lot of weapons in your flak jacket. Suddenly someone is standing behind some tree behind me. He doesn't have a stone in his hand, nothing. But if he is standing behind a tree, he is hiding and that's a good enough reason to shoot at him. But perhaps he is hiding because he has seen soldiers? The gas canister missed his head by a few centimeters. Only afterward did I work it out - the demonstration had not even started but the demonstrators had to have gas canisters shot at them. And the Border Policemen - they stand and fire gas canisters with a gun that can hold six canisters; they stand below and fire all the time so that nothing will begin to happen. Not to even allow a possibility that any kind of protest will begin."

At about 2:30 P.M., the soldiers were ordered to move around the village with an order declaring it a closed military area, and to evict anyone who was not a resident. In the center of the village, "a crowd began forming. Not for an uprising. All kinds of people and activists. The atmosphere was very relaxed. There was no confrontation yet. An elderly man who was sitting outside his house said to our officer: 'This situation is bad for you and bad for us. Look, you're here instead of going to the beach with your wife and children.'

Everything was calm until the battalion commander arrived with his jeep, got hold of two company commanders and said: 'Yallah! Start telling your soldiers that all the Palestinians must go back to their houses.' And then there is a kind of ritual - a soldier demands that they go, the Palestinian doesn't move, the soldier pushes him, he falls, there is a commotion, shouting, from time to time a soldier throws a stun grenade or a gas canister. The soldiers grab a photographer [the Israeli artist David Reeb] and he is so, so brave. They throw him to the ground and all the mud and dust cover his face, they handcuff him with his hands behind his back and he continues to say something like 'look at yourselves, at how you're behaving.'"

No commander told R. that the IDF has given instructions not to handcuff from behind except in exceptional cases.

The IDF spokesman said in response that "any diversion from the rules will be examined."

There was an older volunteer in the battalion, R. says. He is over the age of reserve duty and lives in the settlement of Efrat. "When we started to push the residents inside into their houses, he arrived. At that point the atmosphere was still calm. He arrived and grabbed hold of women and threw them to the floor; he took a video camera belonging to a journalist and threw it on the ground. Everyone agreed that he had crossed the line because he really went wild. Even the battalion commander threw him out and demanded that someone put him inside the jeep."

The army spokesman responded that "the IDF does not know anything about that event."

R. saw the soldiers arresting an elderly man after Israeli and foreign activists ran away through his house. He also saw several youths being arrested because the soldiers did not like their defiant expressions. The detained people were held in the pillbox at the entrance to the village from around 3 P.M. until about 8 P.M. They were seated there uncomfortably with a flannel cloth over their eyes and their hands handcuffed from behind, and the handcuffs as usual were too tight.

The soldiers at the site sit around a table, eating, and from time to time one of the soldiers throws something onto the detainees or gets up and slaps one of the handcuffed youngsters on the head or shoulder.