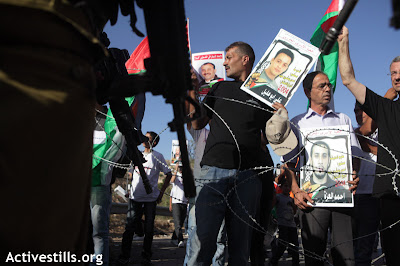 An open-ended hunger strike by Palestinians in Israeli prisons highlights the barbarous conditions to which they are subject, writes Saleh Al-Naami

In the dead of silence, the sound of Jamal Hassan's fall onto the floor of his cell in Shatta Prison in Israel was especially loud on Friday evening. When the guards opened the door to his cell, they found blood flowing from his head and he had lost consciousness. He was transferred to a nearby Israeli hospital. Hassan, 31, is one of hundreds of Palestinian detainees in Israeli jails who 18 days ago began an open-ended hunger strike to protest the brutal conditions they are subjected to. These conditions include a long series of procedures ordered by Binyamin Netanyahu's cabinet in an attempt to pressure Hamas to speed up the prisoner exchange deal and abandon preconditions for releasing the Israeli soldier Gilad Shalit.

Hassan, who is serving a life term in prison, succumbed to hunger, thirst and solitary confinement and passed out. The Israeli authorities are not releasing any information about his health condition, while Palestinian sources assert that the Israelis are concealing the fact that they transferred a large number of Palestinian prisoners to hospitals, out of concern that this news would trigger an angry reaction among the Palestinian public.

Punitive measures against prisoners include transferring all their leaders to solitary confinement, whereby the prisoner is held in a solitary cell measuring 1x1x0.5 metre, including a toilet, where he sleeps and eats. The Israelis also limited the types of food served to detainees, as well as preventing them from leaving their cells, increasing the number and frequency of roll calls, as well as naked body searches whereby prisoners are forced to remove all their clothing under the pretext of searching for sharp objects. Prisoners are also often subjected to brutal abuses by special squads whose job it is to injure and torment prisoners.

Sources told Al-Ahram Weekly that Israel has used a carrot and stick policy with the leaders of prisoners, by escalating harsh treatment while opening channels of communication with these leaders and asking them to pressure Hamas to be more flexible in its preconditions for the release of Shalit, in return for better treatment in prison.

The leaders of Palestinian prisoners asserted that Israeli political and security personnel are especially brutal with detainees because their leaders not only did not respond to the offer by prison authorities, but even asked Hamas not to compromise on any of the demands it is making. The demands include the release of all prisoners serving life terms, as well as women, children and the sick.

The actions of prison leaders escalated aggression against prisoners. Those on hunger strike only ate salt dissolved in water so that their stomachs do not rot, but soon prison authorities banned salt from prisons. Prisoners were also denied any change of clothes, so they remain in the same outfits to further pressure them psychologically.

In a challenging response, prisoners and their leaders took counter measures by refusing to wear the uniforms issued by Israeli prisons and not standing up when guards take a roll call, as well as not cooperating with the prison administration or interacting with it. Palestinian prisoners are calling their struggle against oppressive measures by Israeli forces, the "War of Empty Stomachs".

Prison leaders say that they will confront oppressive policies by withstanding hunger, thirst and solitary confinement. They said they had made up their minds and if the Israeli prison authorities do not stop these brutal measures, they will continue their strike until death.

Sources told the Weekly that prison leaders at first hesitated about announcing an open-ended hunger strike because it coincided with the Palestinian leadership's mission in September of seeking international recognition of the state of Palestine. They were concerned that their strike would negatively affect this effort. Sources close to the issue of prisoners said that the unprecedented oppressive measures by prison authorities against prison leaders, and a decision to expand solitary confinement, convinced prisoners to begin the fast.

Sources told the Weekly that the first one to go on a hunger strike was Ahmed Saadat, secretary-general of the Popular Front for the Liberation of Palestine (PFLP), and Jamal Abu Al-Heja, a leading figure in Hamas, who are both serving life sentences. They were moved to special cells nearly three years ago, and they have no contact with the outside world. The sources said that Saadat and Al-Heja sent a message on Thursday emphasising the need to continue the hunger strike until the Israeli occupation forces respond to all the demands of Palestinian prisoners, including ending solitary confinement altogether.

The source added that prison authorities isolate any prisoner who declares a hunger strike, and after that forms a committee to negotiate with him the terms of ending the strike. Israeli authorities were reportedly surprised to find that Palestinian prisoners in all their jails have the same demands. ADDAMEER, the Prisoners' Support and Human Rights Association, a group that defends prisoner rights, said that prison authorities are now gathering large numbers of prisoners and beating and terrorising them, in an effort to break their will.

Palestinian Minister of Detained and Freed Prisoners Eissa Qaraqa said that the "War of Empty Stomachs" is targeting the extremist right-wing Netanyahu government, as well as the Israeli Prison Authority. Qaraqa said that the battle would continue until all prisoner demands are met. "If the occupation force does not stop punitive measures, the struggle against occupation will not remain inside prison walls," he warned. "It will move to the Palestinian street."

Sherine Iraqi, a lawyer for the Palestinian Ministry for Prisoners, said that the detainees whom she met were handcuffed and wore ankle cuffs, and that prisoners at Shatta are searched while naked when they are transported from one place to another. Iraqi added that the health condition of several of those on hunger strike has become critical.

Hamas called on resistance factions to sharply escalate activities against the Israeli occupation in response to what it described as "crimes against prisoners". "Amidst silence by the world community, and Arab and Islamic weakness, we will defend our prisoners and resist occupation everywhere," declared Khalil Al-Hayya, a leading Hamas figure during a massive march sponsored by his group on Friday evening in Gaza in solidarity with the prisoners. "We will not rest until we liberate all prisoners from occupation jails."

Al-Hayya noted that comprehensive resistance in all its forms is the way to liberate the prisoners, protect the free, safeguard their dignity and defend the individual whom the Israeli occupation has violated in dignity, life and in possessions. "In response to the arrogance of the occupation in violating the rights of our prisoners, we will pursue it with our resistance and will prosecute its leaders as war criminals and they will pay for their actions sooner or later," he added.

The Hamas leader held Israel responsible for the lives of 7,000 prisoners who are on hunger strike in the "War of Empty Stomachs", calling on the Palestinian people to close ranks and unite behind the prisoners. Al-Hayya also called on the free people of the world and Arab citizens to take action on the issue of prisoners and to prioritise it, in order for Israel to know that the prisoners are not alone.

With empty stomachs, thousands of Palestinian prisoners are facing Israel's oppressive machine. They are counting on the Palestinian people in the West Bank, Gaza and in Diaspora not to abandon them to their fate. They also hope that the world's conscience will awaken and pay attention to their impossible suffering.