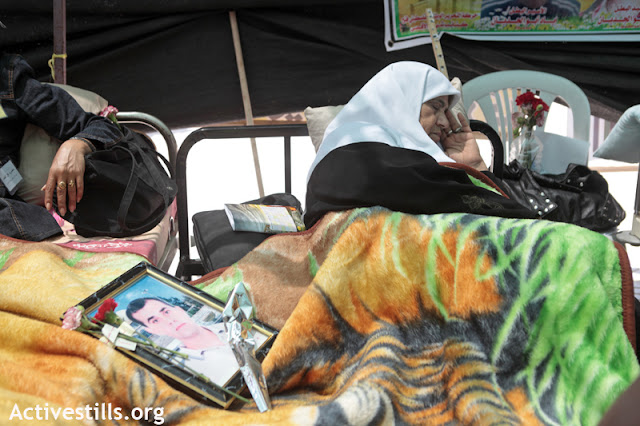 
Their Fate is in Our Hands
May 17th: 24 hours of hunger in solidarity
with Palestinian prisoners in Israeli jails
Coming Thursday, May 17, will mark a month to the hunger strike, with over 2,000 Palestinian political prisoners in Israeli jails participating in it. As Israel refuses to accept the prisoners' demands for their basic rights, including humane treatment, many of them face immediate risk of death as the world watches over in silence.
The prisoners have decided to live in dignity or starve to death in their isolation cells, and a global mobilization is urgently needed to break the deafening silence! A month into the hunger strike, join a

Global 24-hour hunger strike
In front of Israeli embassies, consulates and UN offices
May 17, 2012
Endorse the Palestinian civil society call for a boycott of G4S due to its complicity in Israel’s violations of Palestinian prisoners’ rights
Click here to pledge to join the Global 24-hour hunger strikeEmail us if you are organizing a sit-in in your community
Background
More than two weeks ago, some 2,000 Palestinian prisoners have launched an open-ended hunger strike and their life is in danger. Their demands are simple and the strike's slogan, echoing through the prison walls, is just as plain- freedom or death. The lives of all prisoners on strike are currently under danger, but among them is a smaller group, which has been striking for a longer period and whose lives are under immediate threat.
Thaer Halahleh and Bilal Diab have not eaten for more than 70 days - since the 29th of February. Israeli courts have rejected their appeals and refused to free them from administrative detention where they remain without charge or trial, subject to secret evidence and secret allegations. They are in critical condition.
Hassan Safadi has been refusing food since the 2nd of March, Omar Abu Shalal, 54, since the 4th of March, Mahmoud Sarsak, the only Gazan to have been incarcerated under Israel's Illegal Combatants Law, since the 24th of March, Mohammed al-Taj, 40, also since the 24th of March and Ja'afar Ezzadeen, 41, since the 27th of march.
The Prisoners' key demands include:
Palestinian prisoners on hunger strike have been hit hard with retaliation from Israel Prison Services, including beatings, transferring from one prison to another, confiscation of salt (an act that could have severe health consequences for hunger strikers), denial of family and lawyer visits, and isolation and solitary confinement of hunger strikers.
In response, Human Rights Watch issued a statement chiding Israel’s over its administrative detention policy; it said, “It shouldn’t take the self-starvation of Palestinian prisoners for Israel to realize it is violating their due process rights." Amnesty International also issued a call for urgent action from individuals around the world to contact Israeli authorities about Bilal Diab and Thaer Halahleh.
Emphasizing imprisonment as a critical component of Israel’s system of occupation, colonialism and apartheid practiced against the Palestinian people, Palestinian civil society and human rights organizations have called for intensifying the global Boycott, Divestment and Sanctions (BDS) campaign to target corporations profiting directly from the Israeli prison system. In particular, we call for action to be taken to hold to account G4S, the world’s largest international security corporation, which helps to maintain and profit from Israel’s prison system, for its complicity with Israeli violations of international law.
Signed:Popular Struggle Coordinating Committee
Palestinian BDS National Committee (BNC)