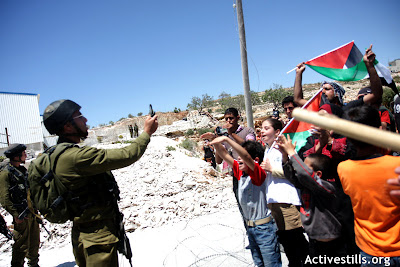 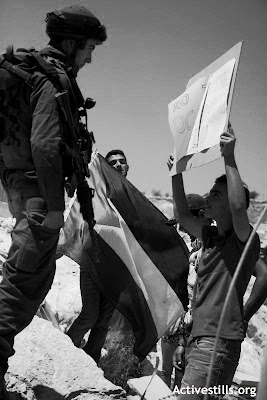 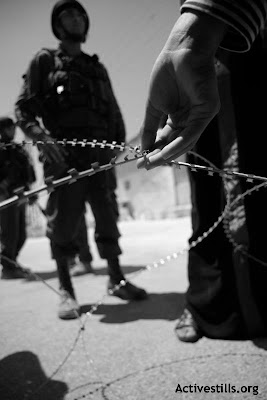 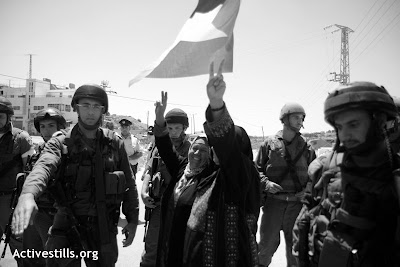 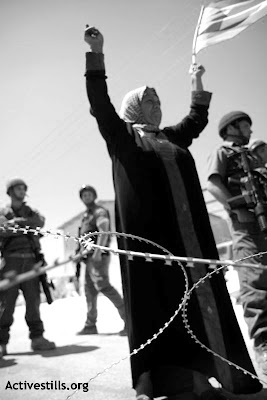 Yesterday, like every Friday at al-Ma'sara, the weekly protest in this village near Bethlehem was met by armed soldiers who had blocked the village exit road with razor wire, denying the people their right to access their land.

This week around 80 people marched to show their support for al-Ma'sara�s struggle against the Wall. Locals were joined by Israelis and internationals, among them a French group of elected members of town councils in Normandy.

The organisors of the protest, the al-Ma'sara Popular Committee Against the Wall and Settlements, held speeches calling for an immediate end to the colonization of Palestinian land and an end to the occupation. Other speeches were held in Arabic, Hebrew and English, in addition to a powerful speech given in French by a member of a mission from Normandy visiting Palestine. The mission aims to promote cooperation between local town councils in France and their Palestinian counterparts.

Men and women, young and old, both villagers and people coming from different parts of the world joined the cheering and chanting for a free Palestine. During the protest, two Palestinian women managed to cross the razor wire military obstacle while others were holding it down. Waving the Palestinian flag they walked down the road for which they should have the inevitable right to do so.