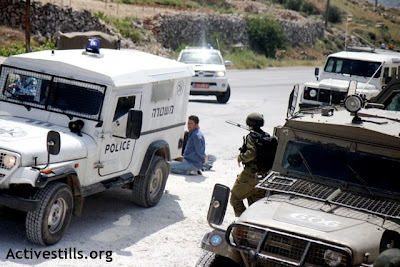 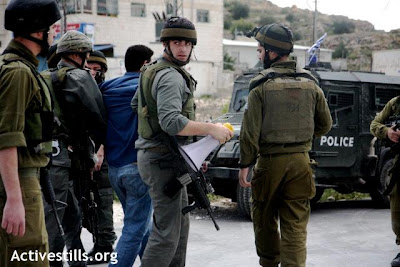 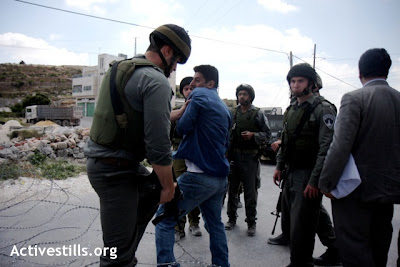 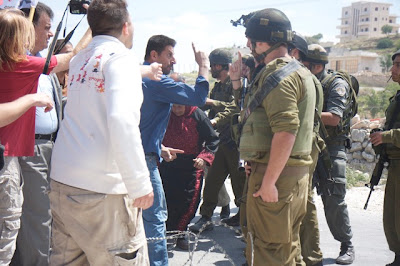 (c) Anne Paq/Activestills, 01.05.2009. Arrest of Mahmoud Zwahre during the weekly non-violent demonstration against the Wall


Interview with Mahmud Zwahre, Head of the al-Ma'sara Popular Committee

Mahmoud Zwahre (center with hand on child), at the May 1 demonstration against the Wall, during which he and several other Palestinians, Israelis and internationals were arrested.

The al-Ma’sara Committee against the Wall and Settlements has been organizing demonstrations against the confiscation of their land for the past two and a half years. During the demonstration on 1 May 2009, the Israeli army arrested Hasan Bergia, Mohammad Bergia, Mahmoud Zwahre (members of the popular committee), Mustafa Fuara, Azmi Ash-Shyukhi, Haggai Matar (Israeli activist) and Tom Stocker (British volunteer). The last two were released the same day on 1,500 NIS bail with conditions of not entering the West Bank for two weeks. Azmi Ash-Shyukhi, Mustafa Fuara and Mahmoud Zwahre were released on bail (50,000 NIS all together) on 13 May, after being held in military prison for almost two weeks.

Interview with MAHMOUD ZWAHRE, the Mayor of Ma’sara, member of the al-Ma’sara Popular Committee, and director of the joint council of nine villages South of Bethlehem.

How did al-Ma’sara nonviolent movement start?

We started in June 2006 to build a nonviolent resistance movement against the settlement and the Wall: we held meetings with farmers, with associations in the nearby villages and with the local councils. At that time, Israel started to confiscate land in the village of Umm Salomona. When we witnessed what was happening to our neighbors, we formed a committee of 13 persons coming from nine different villages (9.000 people) South of Bethlehem, which was later able to gather 100 persons.

Why does Al-Ma’sara play a key role in the movement?

Actually al-Ma’sara (1,000 persons) is the village less affected by the Wall, but it counts the highest percentage of educated population of the area, therefore the most active people of the committee come from there. Even if we have not been directly affected by the Wall and the settlements, we understand the importance of raising our voices against the violence and injustices Palestinians are suffering. Unluckily now, the villagers from al-Ma’sara are the only ones attending the demonstrations, but even if we are few, we stand firmly and we believe in the importance of keeping protesting.

Why don’t people from other villages join your action?

People do not attend protests and sometimes even complain about them because they are afraid: they fear that they can get arrested, injured or even killed, like what happened in Bil’in. Nevertheless, the attendance at protests is further compromised by some influential collaborators who keep discouraging people from attending protests in order to maintain their “special relationship” with the Israeli authorities. Despite these opponents, in 2006, Muhammad Bergia and I won the nine-village local council elections, but our victory made our position even worse. We exposed ourselves, and the result was that we got arrested on the last 1 May, during the weekly nonviolent demonstration.

Why do you think the Israeli military is becoming more aggressive against nonviolent movements?

The Israeli military is now working hard to stop nonviolent resistance movements because our protests clearly show that Palestinians are trying to fight for their rights through peaceful means, which are not only accepted, but even encouraged by the international community. Through nonviolent demonstrations, we prevent Israeli government from portraying Palestinians as violent terrorists who threaten Israel’s security and safety. We put Israel in the uncomfortable position of not being able any longer to put a mask on its armed attacks against unarmed civilians. They are trying to repress our peaceful struggle against their illegal acts. This is the reason why they are mainly targeting people who lead these resistance movements and this is the reason why they arrested us.

Tell us about the day of your arrest

At the May 1st demonstration, a speech concerning the effects of the Wall on workers’ life was held. After that the protesters stood in front of the soldiers and Muhammad Bergia was in the frontline. Suddenly they caught him and dragged him away. Hasan Bergia, Mustafa Fuara, Azmi Ash-Shyukhi, an Israeli solidarity activist and Tom Stocker, a British volunteer, tried to release him, but got arrested as well. Then the launch of tear gas began in order to break up the crowd. I later decided to go and talk to the soldiers, trying to discuss the release of my comrades, but I got arrested too.

The soldiers took us, hands tied, to the detention center in the Gush Etzion settlement and threatened us, saying: “now we’ll see how you will be able to protect yourselves without journalists and cameras.” Then the police border officer started to beat Muhammad right in front of us and tried to choke him. We have pictures of this officer and we will denounce him with the support of B’Tselem. After signing a document with our names and IDs numbers, we went to the doctor, but despite our health problems, he refused to give us the proper medical treatments. Then the soldiers released the Israeli and the British and took us to the jail, also in Gush Etzion. Before entering the prison, the police officers registered Muhammad with the wrong name and this mistake made by the police officer was later used in the process as evidence against him, accusing him of giving wrong information. Then they made us wear prison uniforms, forced us to kneel down with tied hands and ankles, and prevented us from walking while holding our heads high. That was to humiliate us. The next morning they came into the cell to count us, but to do that we were forced to kneel down and look at the floor while saying our names and we had to remain in that position for half an hour. Then a breakfast of one tomato and one yogurt came for me and the other eight persons. I decided to talk to the jail director, asking him “Why are you treating us in this way? Above all, we are human beings and there are international laws protecting prisoners that you are not respecting.” He just answered: “for security reasons!” When we asked for a lighter to smoke, we were told: “Shalit is not allowed to smoke!,” so we couldn’t. I remained in this jail for 12 days.

How about the process?

The first trial was after three days of detention, on 4 May. The DVD of the demonstration was shown to the judge, who decided that there was no reason for detaining us because we did nothing illegal that could represent a danger for the State security, so he asked for our release with a bail of 5,000 NIS. But the military replied that it needed more time to complete the investigation and obtained a first appeal, postponing the process until 7 May. The military appealed a second time, stating the investigation was not yet completed and we still could represent a potential danger for the security of the state. Then the judge doubled the bail to 10,000 NIS. However, they did not release us because the military was given three further days to find evidence against us. On 10 May, the military appealed once again and the process was fixed on 11 May. On Monday the 11th, our lawyer, who was provided by Anarchists against the Wall and the Bil’in Committee, pointed out there had been a different behavior towards Palestinians from one side and Israelis and foreigners from the other, but “it was Shabbat and the police couldn’t detain too many people,” was the excuse.

On 9 June the final court will be held, but in order to be released on 11 May, Hazmi and I had to pay 20,000 NIS each bail and Mustafa 10,000 NIS. We were also prevented from taking part in any demonstration until the court case will be resolved. We were able to pay the bail money thanks to the help of some friends, the Bil’in Committee, Israeli associations and activists. Unluckily, the situation is more complicated and difficult for Muhammad and Hassan, who are still in jail.

What will be your next actions?

We have to keep demonstrating. We don’t have to give up even if things are getting worse and harder. We need the help of Israeli activists and internationals, we need them to join our struggle and help us in spreading what is happening here. But above all, we have to raise awareness among Palestinians, who are the ones meant to be active on the frontline against what they are suffering.