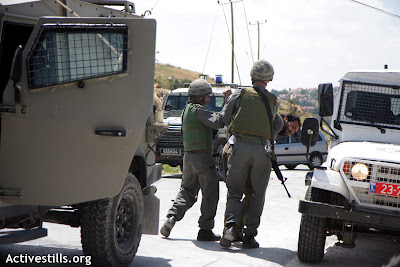 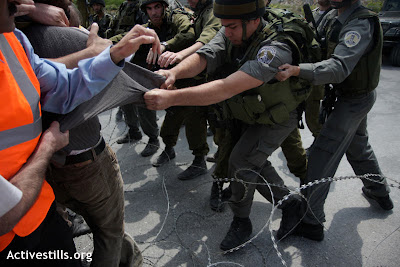 
The Al-Ma’sara Committee against the Wall and Settlements has been organizing and participating in demonstrations against the confiscation of their land for the past two and a half years. Participants and committee members are known for their strict adherence to non-violent tactics in demonstrations. While the protesters maintained their usual tactics on 1 May 2009, Israeli forces escalated their attempt to suppress the non-violent resistance by arresting several demonstrators. A new military commander, stationed in the area two months prior, had announced his intentions to end the resistance and implemented tactics such as night invasions of organizer’s homes, destruction of property and threats.

During the demonstration on 1 May 2009, the Israeli army arrested three members of the Al-Ma’sara Committee against the Wall and Settlements; Hasan Bergia, Mohammad Bergia and Mahmoud Sawahre. Additionally, Israeli forces arrested Mustafa Fuara; a resident of Al-Ma’sara, Azmi Ash-Shyukhi; a resident of Hebron, Haggai Matar; an Israeli solidarity activist and Tom Stocker, a British national volunteering with the Holy Land Trust.

The army alleged that the arrested demonstrators were involved in rioting, interfering with police work, assault of soldiers and policemen, and the destruction of military property.

The Israeli activist Matar and British volunteer Stocker, were released the same day on 1,500 NIS bail with conditions of not entering the West Bank for two weeks. Azmi Ash-Shyukhi; Mustafa Fuara; and Mahmoud Sawahre, were released on bail (50,000 NIS all together) after being held in military prison for almost two weeks on 13 May 2009.

Hassan Bergia and Mohammad Bergia, members of the Al-Ma’sara Committee Against the Wall and Settlements, are still being held.

Additionally, help is needed to cover the cost of the bail and defense of the Palestinian activists. Donations can be made at http://www.awalls.org/donations, with a note that the donation is meant for the al-Ma'sara Committee members.

To Whom It May Concern,

I was disturbed to learn that Mr. Muhamad Bergia, a member of the Popular Committee of the village of Al-Maasara in the West Bank, was arrested for peacefully demonstrating against Israel's separation fence on May 1st, 2009 and is still being held in prison. Over the past two and a half years Mr. Bergia and his associates have displayed an unshakable commitment to non-violence and to dignified action.

Mr. Bergia in particular is well known for his commitment to the struggle for peace through non-violent means and for his willingness to work in partnership with Israelis. He is a respected member of the community; Bergia is the secretary of the local council village and a teacher in the village. I am impressed with his honesty and commitment to non-violence. My understanding of Israeli law is that the right to demonstrate peacefully is protected. Mr. Bergia should be commended and not punished for his efforts.

I was in attendance of the 4th Bil'in International Conference on Popular Nonviolent Resistance, where Mr. Bergia was a participant. His participation in a conference to promote justice for Palestinians is a mark of his commitment to nonviolence.

I hope and trust that Mr. Bergia will be allowed to return to his family, including his young daughter, and community without further delay and that his name be cleared of all accusations.