Demonstration in Nabi Salih in honour of Mustafa Tamimi, 16.12.2011 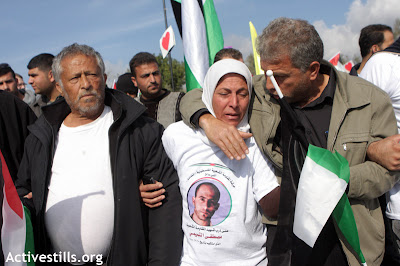 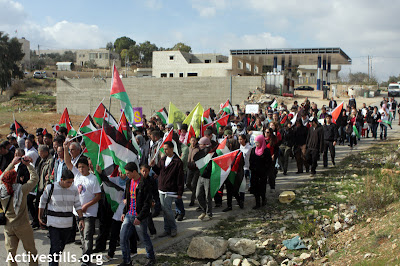 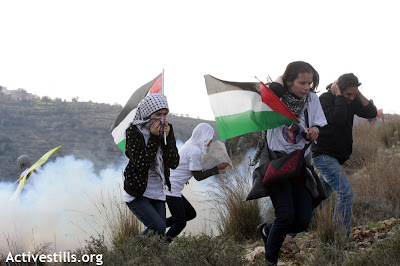 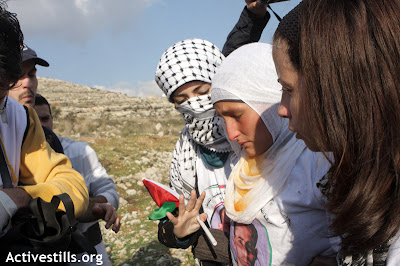 photo 1: The parents (left) of Mustafa Tamimi and his uncle are seen taking part in the weekly demonstration against the occupation and settlements in the West Bank village of Nabi Salih, on Friday December 16, 2011. Mustafa Tamimi was killed the week before during the demonstration by an Israeli soldier who shot a tear gas canister at close range.

Hundreds of people participate to the demonstration dedicated to Mustafa Tamimi. The protesters came under attack by the Israeli army who fired scores of tear gas canisters directly at the crowd, many of them at heads level. 21 persons were arrested from a group who went to block the entrance of the nearby settlement of Halamish and from another group who tried to reach the water spring of the village confiscated two years ago by the settler. One 18 year old Palestinian young woman was also pepper-sprayed in the face when she approached the Israeli soldiers with a poster portraying Mustafa Tamimi.

Soldiers attacked the peaceful demonstration, shooting tear-gas projectiles directly at protesters. 21 were arrested in an attempt to block the entrance to Halamish settlement and to reach the village's confiscated spring.

Hundreds joined the weekly demonstration in Nabi Saleh today, marking the killing of Mustafa Tamimi (28), who was shot in the face during the weekly protest in the village last Friday. Tamimi was shot from a distance of less than 10 meters behind the semi-open door of an armored military jeep.

The demonstration held today commenced peacefully from the center of the village towards the spring confiscated by the nearby settlement Halamish. Shortly after arriving to the place where Tamimi was shot last week, the march was attacked by a shower tear-gas, shot by Border Police battalions, in both arch direction and directly towards protesters. Massive amounts of tear-gas were shot continuously for approximately 30 minutes, despite the fact that no stone throwing was taking place. In addition, the "Skunk" truck carrying foul-smelling water was used to spray the entire area including the large crews of press present.

During the same time, a group of Palestinian, Israeli and international activists were blocking the entrance to the settlement of Halamish, built adjacent Nabi Saleh, on privately owned Palestinian land. 10 protesters were arrested in this attempt.

In the village, clashes started erupting between local youth and the army. A small group of protesters, who managed to get quite close to the spring, were also arrested. A Palestinian woman was pepper-sprayed by a Border Policemen for no evident reason. Several protesters and media personnel were slightly injured by tear gas canisters. One of them was evacuated to receive medical treatment.

Another group of protesters was arrested while already leaving the village, when a taxi going to Ramallah was stopped by the army. All commuters were taken off the car and a few of them were arrested. All arrestees were taken to the Benyamin police station and most of them are charged with road blocking and entrance to close military zone.

Late in 2009, settlers began gradually taking over Ein al-Qaws (the Bow Spring), which rests on lands belonging to Bashir Tamimi, the head of the Nabi Saleh village council. The settlers, abetted by the army, erected a shed over the spring, renamed it Maayan Meir, after a late settler, and began driving away Palestinians who came to use the spring by force - at times throwing stones or even pointing guns at them, threatening to shoot.

While residents of Nabi Saleh have already endured decades of continuous land grab and expulsion to allow for the ever continuing expansion of the Halamish settlement, the takeover of the spring served as the last straw that lead to the beginning of the village’s grassroots protest campaign of weekly demonstrations in demand for the return of their lands.

Protest in the tiny village enjoys the regular support of Palestinians from surrounding areas, as well as that of Israeli and international activists. Demonstrations in Nabi Saleh are also unique in the level of women participation in them, and the role they hold in all their aspects, including organizing. Such participation, which often also includes the participation of children reflects the village’s commitment to a truly popular grassroots mobilization, encompassing all segments of the community.

The response of the Israeli military to the protests has been especially brutal and includes regularly laying complete siege on village every Friday, accompanied by the declaration of the entire village, including the built up area, as a closed military zone. Prior and during the demonstrations themselves, the army often completely occupies the village, in effect enforcing an undeclared curfew. Military nighttime raids and arrest operations are also a common tactic in the army’s strategy of intimidation, often targeting minors.

In order to prevent the villagers and their supporters from exercising their fundamental right to demonstrate and march to their lands, soldiers regularly use disproportional force against the unarmed protesters. The means utilized by the army to hinder demonstrations include, but are not limited to, the use of tear-gas projectiles, banned high-velocity tear-gas projectiles, rubber-coated bullets and, at times, even live ammunition.

The use of such practices have already caused countless injuries, several of them serious, including those of children - the most serious of which is that of 14 year-old Ehab Barghouthi, who was shot in the head with a rubber-coated bullet from short range on March 5th, 2010 and laid comatose in the hospital for three weeks.

Tear-gas, as well as a foul liquid called “The Skunk”, which is shot from a water cannon, is often used inside the built up area of the village, or even directly pointed into houses, in a way that allows no refuge for the uninvolved residents of the village, including children and the elderly. The interior of at least one house caught fire and was severely damaged after soldiers shot a tear-gas projectile through its windows.

Since December 2009, when protest in the village was sparked, hundreds of demonstration-related injuries caused by disproportionate military violence have been recorded in Nabi Saleh.

Between January 2010 and June 2011, the Israeli Army has carried 76 arrests of people detained for 24 hours or more on suspicions related to protest in the village of Nabi Saleh, including those of women and of children as young as 11 years old. Of the 76, 18 were minors. Dozens more were detained for shorter periods.