I have just been released from jail, after three days inside. I was arrested last Friday, together with 22 others, in the village of Nabi Saleh, during a demonstration commemorating the murder of Mustafa Tamimi. Our arrest took place as we peacefully protested near the entrance to the Jewish-only settlement of Halamish, which is built on lands stolen from Nabi Saleh.

Minutes after we got to the gate, Israeli Border Police officers moved in to remove us from the scene. Palestinians, Israeli and international activists, we were all shackled and dragged away into military jeeps that transported us to the adjacent military base, which is in fact part of the settlement.

In the military base, still shackled, I was assaulted by a settler who hit me in the face, leaving me with a bloody nose. Shortly after, the settler also attacked a female Israeli activist who was by my side. The soldiers and policemen present did not prevent the attack, nor did they bother to detain the settler after the fact. Instead, the zip-tie locks on my hands were removed, only for my arms to be bound again, this time behind my back.

Hours later, at the police station, I learned that to cover up their responsibility for my attack, the soldiers have laid a bogus complaint against me for assaulting them. My hands were tied, my face was bleeding, but it was I who spent the night in the inside of prison cell.

Mohammed Tamimi from Nabi Saleh was also arrested during that same demonstration. While the police decided to release all the others, he and I were to remain in jail. During our demonstrations, soldiers often take pictures, to later use them as "incriminating evidence". This time, the soldiers used one such picture to accuse Mohammed of throwing stones during a demonstration a few weeks or months back. The man pictured in that photograph is not Mohammed Tamimi from Nabi Saleh, regardless, he remains in jail. Military law allows Israel to keep us Palestinians in jail for eight days before seeing a judge, and even then, it is a soldier in uniform who is the so called neutral arbitrator.

As the prison doors closed behind me, my happiness was clouded by the fact that Mohammed Tamimi was not released. The battle for his freedom is only beginning, as our lawyers prepare the petition for his release. If you can, please help us fund legal aid for him and for the countless others who are regularly arrested protesting Israeli Occupation.

I would also like to use this letter to extend my gratitude to Ayala Shani, an Israeli comrade who was arrested with me. She refused the injustice of being released while both me and Mohammed Tamimi were still detained. As these words are written, she is still in jail, despite having been offered her freedom twice already by Israeli courts.

MUSTAFA TAMIMI, PALESTINIAN RESIDENT OF THE VILLAGE OF NABI SALEH WAS KILLED LAST WEEKEND AFTER BEING SHOT IN THE HEAD BY A GAS GRENADE 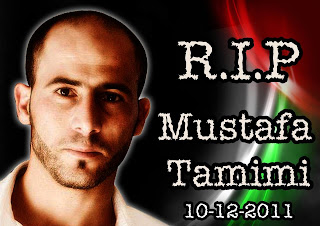 “Ola is somewhere, I don’t know, Saddam is in Jordan, back soon, Louai is up there with all the shebaab (youths), Oudai – you know where he is……..in a fortnight he will be released from prison and will return to the village, and Ziad is at a wedding in Ramallah.” “And where is your son?” I ask Abd al-Razak as we sit outside under his olive tree with his wife Ikhlas, just a few minutes before the start of the weekly demonstration. “Mustafa?” He went out early today. One of his friends came by to collect him and they went to Nablus.” Maybe it’s a good idea that he keeps away from the village for one Friday.” I say. “He can be wherever he wants, he’s grown up” Abd al-Razak replies.

I haven’t been to Nebi Salach for two weeks and coming back now gives me a powerful feeling, a feeling of coming home. Even the knowledge that in just a few minutes this special calm will be replaced by a warlike atmosphere doesn’t change it. On the contrary, it is strengthened by this knowledge, and adds meaning to it. “Were you here when the army came looking for Mustafa?” Abd al-Razak asks me. “They were always looking for him. They came at night, surrounded the house from every direction. He managed to jump out of the window and get away. I was here inside when I heard them firing. One of the soldiers aimed his weapon at me. He was only a kid, about 19, and I started to yell at him to move the gun away from me. Then the officer came down from the roof to see what was going on. I said to him: “I’m a sick man, you come into my home and your soldier points his gun at me?” The officer replied: “I know that your son Mustafa was here, and that he throws stones every week”. I held my wife tightly and said to him: “We also throw stones at you, we all throw stones at you”. I held out my hands and said: ‘Here you are, arrest me and my wife’.”

In the evening, after the last of the demonstrators had dispersed, the soldiers had abandoned the village and the clouds of tear gas were hanging in the chilly evening air of the pastoral village, I went back to say goodbye to Abd al-Razak and Ikhlas. Everyone was sitting outside, Mustafa too, dressed up stylishly, as was his way.

Friday evening. We are sitting at the entrance to the recovery room at Beilinson Hospital, waiting. Two hours ago we were sitting in the doctor’s room and he was explaining to us about Mustafa’s condition. Someone was trying to translate his explanation, and I understood that his condition was not a severe as we had thought. It’s going to be alright, they said. One of the doctors emerges and tells us that Mustafa has been transferred to the neurosurgical department. We go up in the elevator and walk towards the admissions desk, Ikhlas is worried but we reassure her. Waiting.

Another nerve calming cigarette, before making our way back up to the ward. At the entrance, someone stops us saying quietly: “We have just been told that it is a matter of hours until he dies. I don’t understand - none of us understand – just a few moments ago we were talking about taking everyone on a trip to the beach and to eat in Jaffa and now you are saying that he is about to die? We go into the lobby, Ikhlas’s cries split through the dreadful silence of the hospital. We try to calm her, to comfort her and give her a little hope. But she knows. She can feel it.

In a dream. We are standing outside the hospital elevator early in the morning. Ikhlas smiles and says “Let’s go to the beach now” My phone buzzes indicating that I have a message. I wake up with a start. The message says: The doctor said that Mustafa’s brain failed at 5am. He won’t live out the day” It is 7:46am and I slip back into the dream about the beach. The phone buzzes again. It just says: “He died”.

We are waiting in the lobby of the funeral hall, I look towards the elevator and wait for it to start coming down. The numbers move slowly, the elevator stops, the doors open and a stretcher emerges, bearing a figure shrouded in a white sheet. Living people are in the room, but death is in the air. The ambulance driver has forgotten something upstairs, and we stand silently around the body, waiting for him to return, to save the situation. I sit at the back of the ambulance, as it races along the highway towards the Rantis checkpoint, I reach out and dare to touch him, first his arm and then, his head. I don’t know if this is real or not, but I do know that this is the last time that I will be close to him.

After the earth had covered the last piece of the flag that the covered you, I didn’t know where to go. Then, the familiar Friday shouts started. I went closer and saw faces shouting the same familiar slogans, but their faces were different today, their tears were barely dry but they were already holding rocks, going down once again to the roadblock, to the jeeps. One of them hugs me tightly, and says: “Better to die on your feet, than to live on your knees." I nod in agreement and think that maybe he is right and it will never end, but we will not give up.