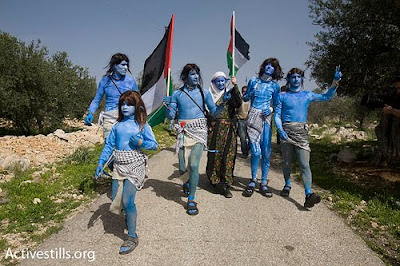 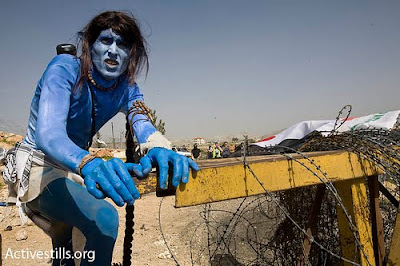 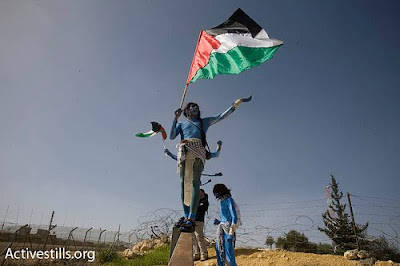 The village of Bil’in reenacted James Cameron's new film “Avatar” during
today’s weekly demonstration. Five Palestinian, Israeli and international
activists were painted blue, and wore pointy ears and tales, resembling the
Avatar characters. Like Palestinians, the Avatars fight imperialism and
colonization in their homeland. Although the colonizers from the movie have
different origins, the Avatars’ presence in Bil’in today symbolizes the
united resistance to imperialism of all kinds.

Today’s non-violent demonstration was again met with excessive violence by
the Israeli army. Sound bombs and tear gas were used, leaving four people
directly injured by the canisters. The canisters were shot directly at the
protesters, which is in violation with the IOF’s firing regulations. Many
other activists suffered from tear gas inhalation.

Before coming to Bil’in, Israeli activists reported that police were present
at their carpool meeting point. Their ID’s were checked and some cars
reported they were followed by the police. At the Rantis checkpoint, they
were delayed once more and activists were obliged to continue their journey
by taxi.

Bil’in has reason to celebrate this week. Yesterday, preparations for the
construction of the new Wall began, which returns 30 per cent of Bil’in’s
land to the village. Iyad Burnat, Head of the Bil’in Popular Committee
speaks of a victory: “We feel relieved and feel the non-violent resistance
is successful in its aim. Nevertheless, we will continue our struggle
against the occupation as Bil’in still has another 30 per cent of land that
is confiscated by Israel.”

Next week Bil’in will have a special demonstration, celebrating five years
of non-violent resistance and expects a large number of demonstrators.
Bil’in calls for all its supporters to invite people to join in next week’s
demonstration.