Palestinian kid in crtical condition after having been hit by rubber-coated steal bullet in the head in the demo in Nabi Saleh, 05.03.2010 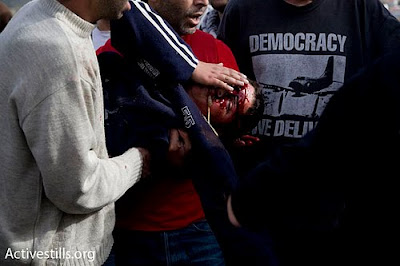 I visited 14-year-old Ehab Afdal Barghouthi around 11:30am this morning. He is in the Intensive Care unit at Ramallah hospital. People were allowed to visit him this morning, but he was not conscious during my visit. He was involuntarily writhing and still connected to various medical support systems. Last night after the Israeli army shot him in the head with a rubber bullet, he had to wait three hours before receiving medical attention in Ramallah. He was first taken to Sulfit where he waited for approximately one hour, but proper care was unavailable. He was then taken to the Ramallah Hospital, but the brain surgeon was not there yet, so he waited another two hours for a doctor to arrive in order to begin surgery to remove the rubber bullet that had entered his skull above his right eye. Ehab was in surgery for three hours with a waiting room full of friends and family, as well as International supporters. The extent of his injuries is still unclear; doctors told us that they would have to wait 24 hours to see if he needed to be transported to Hadassah Hospital in Jerusalem. The doctors think that he may have damage to his right eye and potential paralysis to his hand and leg.

Ehab Fadel Barghouthi (14) was shot with a rubber-coated bullet that struck him in the forehead above his right eye and entered his skull. He was shot by Border Police officers who took over the rooftop of a house in the outskirts of the village and were in no immediate danger.
According to eye witnesses, the boy was standing twenty meters away from the house when he was shot, after which he immediately collapsed. He was evacuated to the Salfeet hospital unconscious, and from there transferred to the Ramallah hospital. Numerous eyewitnesses confirm stone-throwing did take place at the time of the shooting, but all affirm Barghouthi did not partake in it.
He remains unconscious and in critical condition in the intensive care unit of the Ramallah hospital.
The shooting took place in the aftermath of a 150 people strong demonstration marking international Women's Day and protesting ongoing land grab.
The demonstration was attacked by the Army with tear-gas and rubber-coated bullets while still inside the village and from great distance for no apparent reason. Nine other people were injured, including two journalists and an eighteen year old woman who was hit in the neck with an aluminum-made tear-gas projectile.
The residents of Nabi Saleh have been holding regular demonstrations against the creeping confiscation of their lands by the adjacent Jewish-only settlement of Halamish. Protest was sparked after settlers, abated by the Army, forcefully took over a natural spring belonging to the village.
The village is home to some 500 people. Since demonstrations in the village began, nine of its residents, roughly two percent of the Nabi Saleh's population, have been arrested on protest-related suspicions and dozens were injured.
In recent months Israel is waging a politically motivated campaign of repression against the Palestinian popular struggle that includes a policy of negligent use of arms, cover up of criminal misconduct and legal persecution.

Email ThisBlogThis!Share to TwitterShare to FacebookShare to Pinterest
Labels: demonstration against the wall