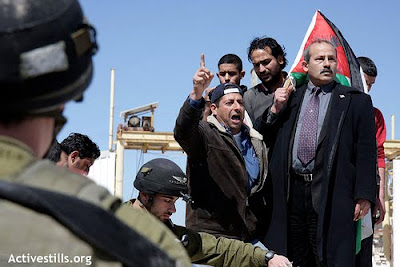 Mahmoud Zwahre, a prominent member of the alMaasara Popular Committee Against the Wall and Settlements, was brutally assaulted at the Israeli Container Checkpoint near Bethlehem this morning. Zwahre was on his way to a Ramallah meeting when his car was stopped. He was held for nearly two hours, during which he was kicked, punched AND beaten using a rifle butt.

Mahmoud Zwahre of the alMa'sara Popular Committee Against the Wall and Settlements was detained at the Container Checkpoint near Bethlehem this morning on his way to a meeting in Ramallah. Zwahre was detained after a Border Police officer positioned at the checkpoint recognized him from the weekly demonstrations held in alMa'sara for the past 3.5 years. He was held for almost two hours, during which he was subjected to an aggressive search through his possessions and his car, and then detained in an interrogation room for no apparent reason.

In the interrogation room, with no witnesses around, Zwahre was punched, kicked and beaten with a rifle butt by the officer for over 10 minutes. During the rampage, the officer explained that the beating was intended to "teach Mahmoud a lesson", because he recognized him from the demonstrations. He also threatened to order his arrest. Zwahre was eventually released, suffering minor injuries and bruises, and intends to file a complaint against the officer.

Zwahre's abuse at the checkpoint today is part of a larger campaign Israel is waging in an attempt to suppress the Palestinian popular struggle. Recent months have seen the arrest of dozens of individuals connected to anti-Wall and settlement protest, often on questionable grounds or without any charge at all.

In the village of alMaasara alone, where Zwahre is from, the Army and Shin Bet have made clear threats against members of the popular committee on five different occasions between December 29th, 2009, and January 15th, 2010. The threats, mostly conveyed during night-time raids on the village, included warnings that popular committee members would be beaten and arrested should they continue to mobilize people and organize demonstrations.

During a January 15th night-time raid into the houses of both Mahmoud and Mohammad Breija, soldiers warned the two that repercussions would follow if they did not stop organizing protests in the village. Zwahre was even threatened that a child may end up dead as a result, implying that the responsibility for the repression and its cost will lie with the Popular Committee

Last Friday, the army conducted a pre-dawn raid on Brejia's house once more, in a prelude to a siege soldiers held on the village the entire day in order to prevent the weekly demonstration from taking place. As the demonstration set out from the village's mosque towards the walled off lands, it was attacked by soldiers who took over rooftops at the entrance to the village.

Weekly demonstrations have been held in the village of alMaasara since November 2006, in protest of the ongoing land theft of farmland belonging to alMa'sara and the eight surrounding villages in the South of Bethlehem district. Demonstrations began when Israel started constructing the Wall in the area, and a way that will allow the expansion of the Gush Etzion settlement block.