What happened in Jericho- a personal account by Mahmoud Zawahra 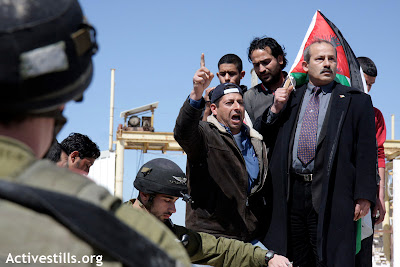 Photo by: Anne Paq/Activestills.org, archive photo of Mahmoud Al Zawahra, during a demonstration in Al'Masara.

Dears,
I would like to thank all of you who stand with us, who have showed amazing support these past three days and demanded our immediate release from Israeli military jail. I hope that we will be able to free Omar Dar Ayoub from Nabi Saleh soon, as well. Although Omar was arrested together with the other four of us on Wednesday, only a short time after finally having been released from military jail as part of the “prisoner swap”, Omar, alone, was remanded until Sunday. We need Omar out NOW, together with all political prisoners.

Unlike Omar, Anwar Abu Mousa, the young woman from Ramallah who was arrested first, ‘Azmi al Shyouhki from Hebron, Khaled Tamimi from Nabi Saleh and I were released Thursday night, after the first hearing of the “case” against us in military court. During the hearing, the prosecution had argued vehemently for the need to extend our imprisonment – on the grounds that, for various reasons, they had allegedly not been able to conclude the interrogations and generally needed more time to prepare the case against us. Fortunately, our lawyer was nonetheless able to secure the release of the four of us – on the condition that we each pay 3000NIS in cash as bail, sign guarantees of another 10,000NIS that we would be forced to pay should we fail to show up in military court, and the signature of a third person also guaranteeing that we will show up (as if there was any way we could evade that in the occupied Palestinian West Bank).


No charges were formally brought against us yet, but during the hearing, the prosecution accused all five of us of having “assaulted” soldiers and of “illegal assembly”. In spite of ample video footage and other evidence to the contrary, the prosecution alleged that ‘Azmi, Khaled and I had pushed soldiers, while Anwar had allegedly slapped one soldier and Omar kicked four of them, as if highly armed Israeli soldiers in an equally armed military unit were likely targets for unarmed and handcuffed Palestinian civilians.

Of course, accusing us of assault is an easy and efficient way for the prosecution to criminalize us, but after all that had happened in the previous 30 hours or so, it was highly surreal to listen to the prosecutor’s allegation. For a moment, it almost sounded like we should organize a campaign of solidarity with the soldiers.

What actually happened is this:
Early Tuesday morning, our convoy set off from the center of Jericho. Our plan was to drive together to Ramallah on “Road 1”, one of the so-called “bypass roads” that Israeli authorities illegally build on Palestinian land to provide infrastructure for the equally illegal settlements.

Although they run right all over the occupied West Bank, in and around our privately owned lands, the “Israeli Civil Administration” claims full control on these roads, but “allows” us West Bank Palestinians to use them alongside the settlers. In practice, this means that Israeli traffic police not only patrols on these roads, but actually claims authority on them, frequently stopping us and issuing arbitrary fines; all along these roads, Israeli settlers wait at bus stops of ordinary Israeli bus companies, only a few meters away from the make-shift bus stops that we are allowed to use; attacks through settlers or pull-overs through Israeli military are common…

We had intended to drive up to Ramallah via one of these roads, and only then use some of those roads that are accessible to Jewish settlers only and from which we are barred. But we didn’t even make it that far.

On our way to Ramallah, before reaching “Road 1” which, according to their bizarre military law, we are allowed to use, we were stopped by Israeli armed forces. We were told that we would not be allowed to continue our trip while displaying the Palestinian flag – an act that, since the “Oslo accords” of 1993, is no longer considered illegal by Israeli authorities. About 300m away, illegal settlers were driving past unhindered, displaying the Israeli flag in the occupied Palestinian West Bank.

As you might have seen in the many videos of that day, we were angered and outraged at this arbitrary denial of our freedom of movement.. We had come to exercise some of those rights that are regularly denied to us, and we were not going to walk away with yet more of our rights stripped away. We refused to turn back or to take down our flags.

In the ensuing argument, Awar was suddenly and very arbitrarily arrested. When Omar tried to prevent this absurd arrest, he, too, was arrested, shorty followed by ‘Azmi. At that point, IOF took both my ID and the ID of my friend Naim Manar, and ordered us to move to the side while they made checked information on us. I realized that they were going to arrest me as well and that my car was stuck on the road, right in front of the soldiers, so I handed the car keys to Khaled Tamimi, and caught a ride back to Jericho. I later learned that they then arrested Khaled (who – after having been released together with us Thursday evening – was rearrested later that night during a raid, together with 17 year old Anan and 20 year old Mahdi, and then again released yesterday evening while Anan and Mahdi remain in prison). The army also prevented anyone else from moving my car.

30 minutes after I left, the Israeli “intelligence” office began calling me on my mobile phone and threatening that I would be put on the “wanted” list if I did not turn myself in immediately. Knowing the limited options available to us in occupied Palestine, I opted to go back in the company of a lawyer.

As soon as I arrived, I was handcuffed and blindfolded and taken to the “DCO” in Jericho where I was kept until I was brought to the settlement in Ma’ale Adumim. After Anwar, Omar, ‘Azmi, Khaled and I were interrogated, we were then transferred to the military prison in Ofer, which marked our official arrest.

This is only one more example for the blatant disregards of any Palestinian rights in the entire Israeli system, including its so-called legal one. Khaled, like so many other Palestinian women, men, and children, remains in military jail because of the arbitrary and criminal politics of an entity that is allowed to act with total impunity. This has to stop!

UPDATE: Oma Tamimi who was arrested with Mahmoud is still in jail!